American Professional Liz Lyles is one of the favorites going into the Regional Championships at IM Brasil on May 29th. She faces strong competition, mainly by last year’s winner Ariane Monticelli, IM France winner Caitlin Snow and two fast German Pros, Mareen Hufe (one of the best bikers in female triathlon) and Kristin Möller (one of the best runners). I’ve had the chance to chat with Liz about the challenges she faces, her last season and the expectations for this year.

Liz discovered triathlon in 2001, but didn’t turn Pro until August 2012 – after becoming a mother to son Luke (born 2008) and daughter Emma (born 2010). She has to squeeze her training between taking care of the children. When we talked, she asked to start at 9:15am (“because I drop my kids at the bus at 9:10”) – and she had a long run scheduled afterwards.

“Yesterday I had a long swim and a bike. I got home at 3:40 and had to be at the bus stop at 3:45. So I just grabbed my keys and went into the car still in my bike clothes to get the kids. When we got home all I wanted to do is to shower and lay down. Instead I had to do dinner, do the laundry, get groceries and so on. Before a big training block I try to warn everybody because I can get a little impatient by 5 o’clock at night.

“This weekend I’m going to do a Century Ride .. that helps because they provide nutrition, there’ll be other cyclists on the road and I don’t have to watch for traffic on my own. We’ll bring our travel trailer. The kids love camping, so we go down on Friday and camp close to the start. Then on Saturday I do the century ride and a run. In the meantime [husband] Chip and the kids are fishing and having a good time. On Sunday morning I’ll have a long 20-mile run while they do some more fishing, then I’ll come back and join in. It’s a good way for a little family vacation where I can safely train.

“I love looking at rankings and results but I have four hundred other things to occupy my mind: Did my son win his baseball game? Is Emma going to score a goal in soccer? I can’t really compare myself to what other professionals are doing .. it’s a different life. But I’m stoked about having my kids and my family.”

Liz won her Pro Ironman debut race at Wisconsin 2012 with a sub-3 run. She qualified for Kona 2013 (16th place) and won IM Western Australia with a sub-9 finish. In 2014 she was second at IM Germany and finished Kona in 7th place as the top US female athlete. She started her 2015 season with a win at Wildflower over defending champion Heather Jackson in a finish chute sprint duel and a second place at the Regional Championships in Brasil.

“I won Wisconsin 2012, that was back when I didn’t know how to bike. Being a Professional was fresh and exciting and new. I bike slower, my legs felt fresh at the start of the run and I ran a 2:59:33. My times have come down in the swim and especially on the bike.

“My best IMs were not my wins but when I got second in Frankfurt and in Brasil and of course Kona when I got 7th. If I want to win one of the Regionals or podium in Kona, I have to get stronger and more comfortable towards the last 20 miles of the bike – so feeling fresher at mile 90. But also at mile 112 so I can get off the bike and straight into my pace for the run. 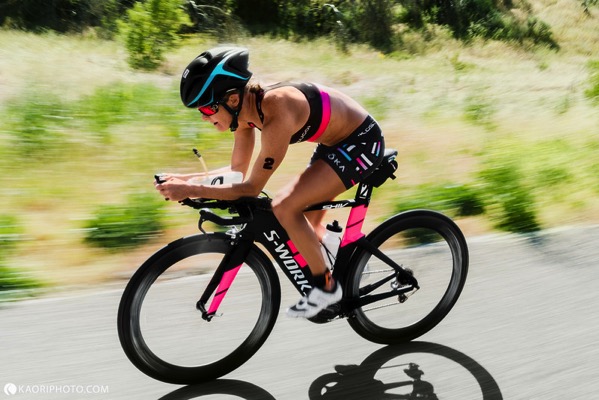 “The next couple of weeks on the long rides I’ll focus to take in the nutrition. On the bike I try to carry all my nutrition and only stop for water. On the run I’m on my own and no one gives me my water bottle every couple of minutes. It’s much easier in the race with all the aid stations.”

Liz lined up at IM Canada in Whistler, but she had to abandon quite early on the bike as she was hypothermic in the cold rain that surprised all the racers. Three weeks later she raced IM Mont Tremblant but had a sub-standard 7th place finish in 9:42 and a disappointing 3:24 run.

“The first half of 2015 was great, but then it all went downhill with that stupid cold weather front at IM Whistler. I felt that was my chance to pick up another IM title. I just completed 14 miles of the bike – it was freezing cold. Some guy picked me up in his truck and I later met him in Kona. He said ‘Liz, I rescued you from the side of the road in Whistler’ and I didn’t remember anything. At Wildflower I met a guy who had also been picked up and we rode in the ambulance together to the Expo area. He said he tried to talk to me and that I was blue and shaking, but I don’t even recall much of that.

“I really wanted to race and I jumped into some more Ironman training. When the race in Mont Tremblant started I felt depleted and had a pretty bad race there. And after that Kona was next. I didn’t like training for three Ironmen in a row. I’ll never try that sort of thing again. When building for an IM I really like to race half IMs to get the speed and then take it down a notch for the Ironman in terms of effort.

“My kids go on summer break. All summer I was training for an IM and it wasn’t fun for anyone in our family. This year I’m going to do Brasil and then when the summer break starts in June, I’ll spend some more time with them and don’t want to be stressed about racing. When they go back to school in August I can pick up the big training then. I’m just learning that I have to plan around when it’s going to be easier for me to train. ”

In Kona Liz finished 14th with a solid race, but that result was overshadowed by a number of great performances such as by the top US finishers Heather Jackson (5th) and Sarah Piampiano (7th).

“I was happy with the swim – I was in the second pack and we had put three to five minutes to the next group. But the Top 10 swimmers more or less rode together while the athletes around me just fell away: Heather Wurtele got her mechanical, Julia Gajer and Rinnie had bad days. The year before I had biked with Heather, Rinnie and Julia in a legal group until about the climb to Hawi where it broke up. I was riding in a group, I felt great, super comfortable pace. This year I don’t know where everybody went, and I was on my own for the whole bike ride. I was just alone pushing. When I was passed by Heather Jackson and Asa Lundstrom after the turnaround at Hawi I didn’t have any energy to go with them. Maybe I lost some speed just training for Ironman. With my fitness I also should have been able to run faster. It was a rough and lonely day.”

Liz approaches the 2016 season a bit differently: She raced a number of 70.3s at the start of season. That worked well for her, she defended her Wildflower title. Now she is looking towards the South American Regional Championship in Brazil at the end of May.

“Looking at a 12 week training block here in Reno it’s hard to stay motivated because I’m always training alone. So this year I’m racing to keep my interest level high. It’s been fun so far – I love getting a bit of rest before the races and then having a couple of easy days afterwards. Panama was just to get out and get some fitness, I knew I wasn’t going to be ready just coming off the trainer. It was pretty hot and humid. My mom and I had a great time to visit the sights. It was a good way to get out but I knew I had a lot of work to do.

“The focus is on Brasil. The weekend before Wildflower I had a hard 20 mile run. Last year at Wildflower it was ‘bike as hard as you can who cares what happens’. I usually like to start the run being down a small gap, to be able to see the front and to pace myself off that. I prefer chasing, but not the three minutes I had last year, maybe one minute. That last downhill run mile is a steep downhill and [defending champion] Heather [Jackson] and I ran it at an all out sprint. This year I pretty much knew I had it so I cruised it down. ‘Okay, Brasil is next so don’t kill your knee.’

“My mom is coming back to Brasil with me this year – we love that place. Last year I had a terrible swim. I got lost and could have been two minute faster on the swim. Around mile 80 the legitimate ten-men-draft packs started to move through. I’m not willing to take a risk [to get a penalty] so I sit up, let them pass and join back in when I’m twelve meters back. It sucks, but it’s what you have to do. I pushed the bike pretty hard last year, maybe too hard so I hope I can run a bit quicker. Coming back to a course I always do better the second time I do it.”

I hope the women’s race in Florianopolis will be as exciting and close as last year when there were six different athletes in the lead on the run. I’m sure Liz will once again be among those that will play an important role. To secure a Kona slot a Top 5 finish should be enough for her, but she has her sights a bit higher: Only winning would be better than last year’s second place. I hope she’ll have a great day of racing on May 29th!