Here’s a graphical comparison of the laps for the top two finishers (click for a hi-res version): 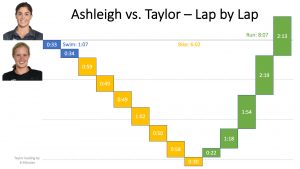 With a few more contenders to look at, here’s my standard line chart on how the race developed for the race leaders in the men’s race (click for a hi-res version): 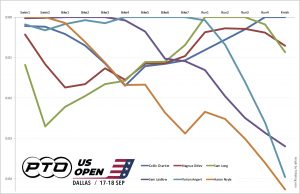 The newly created PTO Tour starts with two events for the 2022 season, the Canadian Open in Edmonton and the US Open in Dallas (race on September 17th and 18th). Each race will offer a prize purse of 1 million US$, attracting top-ranked athletes across all distances. The female and male races will be shown live on various TV stations and through live streams (details on “How to Watch” and the start times in your time zone can be found on the PTO website).

The Canadian Open in Edmonton offers a total prize purse of more than one million US$, all finishers are going to receive at least 2,000 US$. Both winners are going to earn 100,000 US$.

A “Technical Note” on Expected Times

This is the first time we’re going to see a race on the 100k distance (2k swim, 80k bike, 18k run) in Edmonton which makes predicting specific times a “guessing game” as there is no data on the three-loop swim (with two Australian exits giving us a lot of splits!), the hilly bike ride (lots of 4% to 7% grades) and the run course with frequent turnarounds. This means that the times shown in the seedings below have to be taken with an even larger grain of salt than for other races. But I think they still provide some value in that the order of the athletes and – probably as important – the time difference between the athletes should be pretty reliable (at least for those with a decent number of half-distance races) and give a good indication of how the race might unfold when everyone is racing with their “paper form”. But even “paper form” is not very reliable for some athletes: For example, Alistair Brownlee is coming off an injury, or Henri Schoeman’s last race longer than Olympic Distance was Daytona all the way back in December 2020.

As always, the data in these tables should not be seen as the “final word” but rather as a starting point for discussion and speculation. At least for me, it makes it easier to spot “unusual things” as the race proceeds – and I hope it’ll give you extra enjoyment when preparing and following the race.