The last few days I’ve been busy setting up the 2015 KPR Observer. I still have a few more todos on my list, in the meantime you can still benefit from the reduced pre-order price of 24$!

In order to give you a better idea of the value that I’ll provide with the KPR Observer updates during the season, here’s a look at two documents with different views on the KPR Rankings: the Graphical View for an overview, and the KPR Table for all the details. Together with my commentary on recent developments and a look at the upcoming races, they make following the KPR very easy and will safe you a ton of time!

The graphical view shows a lot of information on a single page. Here is an example of the Men’s Standing in early July (of course, there is a similar page for women’s qualifying): 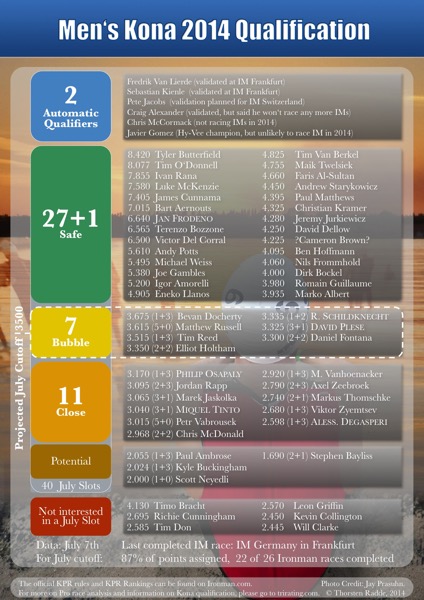 Here’s what you can see on this page:

On the bottom there is some background information how far the season has progressed (date, last race, number of completed IMs etc.).

The KPR Table shows similar information, but goes into much more details. Again, here is a look at the men’s standings in early July:

The Table is delivered as Excel spreadsheets (one for the men and one for the women, plus another sheet showing the Points schemes). Some details on the columns in this sheet:

If you purchase the KPR Observer, you’ll receive this information at least six times (and more likely, ten times) as the season progresses, therefore aways staying up to date on recent developments. You still have a few day left to benefit from it’s reduced pre-release price of 24$ at https://gum.co/2015KPR.