By Thorsten on September 9, 2018 in Challenge Almere

This year’s Challenge Almere saw the very fast conditions. While last year was cold and rainy, the weather this year was perfect with no rain and temperatures just under 20°C. However, this close to the North Sea there will always be some wind, but this probably affected the agegroupers more than the Pros. The mild conditions helped athletes post some very fast run times.

The swim times were pretty slow (maybe two minutes slower than the typical swim times in Almere), followed by a typical fast bike leg. Cam Wurf was able to improve on last year’s bike course record by Kristian Hoegenhaug by almost three minutes. But the main focus was on the overall record which was one of the oldest standing triathlon records: Jan van der Marel had posted a 7:57:46 in 1999 which was broken by Jaroslav Kovacic with by more than two minutes. The new record now stands at 7:55:43.

After the swim Evert Scheltinga and Jaroslav Kovacic had a three minute lead on the rest of the field. They were holding on to the lead for most of the bike, but after 100k on the bike Cameron Wurf took over the lead, eventually posting a new bike course record. The old bike course record holder, Kristian Hoegenahaug was also making up time, and all four reached T2 within four minutes. Both Cam Wurf and Jaroslav Kovacic started the marathon with a sub-2:45 pace, chase of the overall course record. By lap four (of 6) of the run course Cam started to slow down, and Jaroslav took over the lead. It was obvious from the great live stream coverage that he was giving 110%, finally being able to post a 2:43 marathon, winning the race and breaking the course record by two minutes. 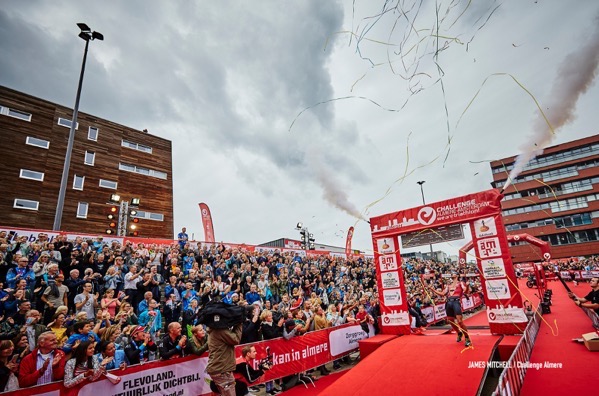 After relinquishing the lead, Cam continued to run well and finished second. He posted a 2:52 marathon which was a new marathon PR for him by more than six minutes. Third place went to Kristian Hoegenhaug, with a 2:50 marathon he was able to overtake Evert Scheltinga who finished fourth.

Debbie Greig had the best swim go the female Pros, she was starting the bike with a gap of almost three minutes to the two race favorites, Yvonne Van Vlerken and Els Visser. Debbie continued to lead her first Pro Ironman race for the first three hours, then Yvonne and Els caught her. For a while these three were riding in a legal group (Challenge Almere was using a 20m draft zone), before Yvonne slowly moved away. Yvonne also posted the fastest marathon, barely missing 9 hours (apparently the battery on her watch had run empty) in her 16th long-distance career win. 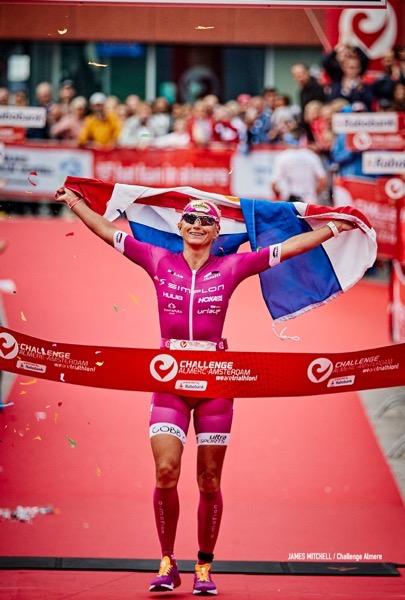 After her solid bike leg, Els Visser was very happy to hold on to second place on the run. Lina-Kristin Schink was able to claim third place with a good marathon, edging out Debbie Greig who finished in fourth place.