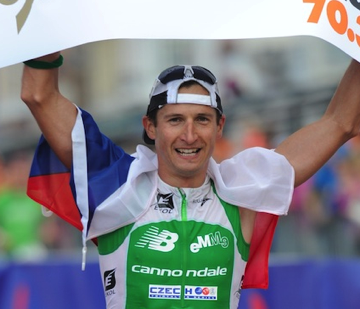 Filip has had a great career racing Olympic distance (participating three times in the Olypmics and winning a number of World Cup races) and had also great results in 70.3s (2nd place in the 2010 World Championships) . He finished his first IM, Florida 2013, with a time of 7:58 in third place. He had some more good results in European of 70.3s, then secured his Kona slot by finishing fourth in Switzerland. As is typical for athletes coming up from the shorter distances, his swim in great and should easily place him in the front pack. Evidenced by his fast time in Florida, he has the engine for fast bike and run times over the longer distance, but it is a bit doubtful what he will be able to do in the tough condition and deep field in Kona. He certainly has a potential similar to Ivan Rana (who finished 6th in hist first appearance in Kona), but it remains to be seen if he will be able to perform in a hot race such as Kona.

Thorsten: How was your season so far?

Filip: Up and down. The first half I didn’t race because of two meniscus arthroscopies (left in mid April, right at the end of May).Then it went up with victories in Haugesund (Ironman 70.3),  Opava (Czech Cup race) and 4th place in Zurich (Ironman) – all races in July. And then down again at the Ironman 70.3 World Championships in Mont Tremblant.

T: What makes Kona special for you?

F: Kona is just another course. I don’t think it’s particularly beautiful, there are nicer ones. But with the climate and the strength of the field, it is certainly the hardest race. It is the World Championships. All the athletes will have prepared for this race very well and want to deliver their best performances. The 55 best athletes will be on the start line … 10 can win and another 20 can be on the podium …

T: Are you doing anything special in your Kona prep?

F: This will be my first time to race in Kona. The one big change is that I will be on the Big Island from early September. There are no changes to the  training compared to what I’ve done in the past.

T: What are your goals for the race?

F: One of my sponsors (Mr. Zdenek Kepak) has given me my goals for this race – to improve the Czech records on this course (Pete Vabrousek holds it for the best place with a 19th in 2002 and Martin Matula for the fastest time with a 8:48:50 from 2006). So this is my goal and I think it is realistic.

T: Any sponsor mentions you’d like to get in?

F: I want to thank all my sponsor for their support: EKOL, Equinox, eMMe, Cannondale, Czech Tri Series, FORD and others. For this race special thanks to Mr. Zdenek Kepak, who made it possible for me to stay on the Big Island for more than a month with my wife and our children!