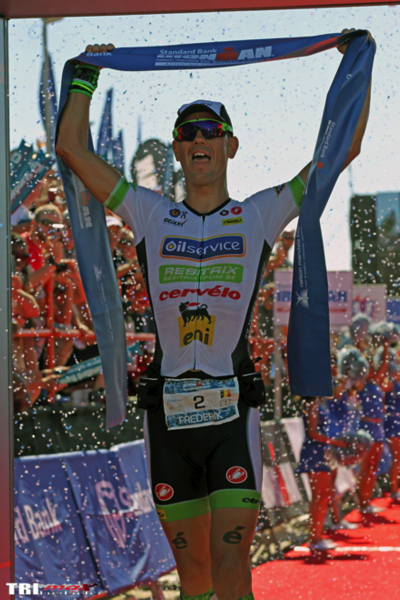 The 2013 champion isn’t the flashiest racer but he hardly ever shows any weakness. Last year in Kona 15 bad minutes cost him a podium place when he was cramping after the Energy Lab: “Afterwards we found out I had a little abdominal muscle rupture that was probably caused by too high rpm going down Hawi with a tail wind. That section was crucial on the bike course 2014.”

This year he has already competed in two Regional Championships. I consider his IM South Africa win in 8:16:35 (including a 2:49 marathon when he already had a big lead in T2) one of the most underrated performances: When taking the slow course and conditions into account it is the second best 2015 performance (behind Frodo’s win in Frankfurt). In Frankfurt he was “one of the big three” in the male field, and some may consider his 5th place a “disappointment” (in the same way as his second place in Frankfurt last year). “I wanted to perform at my best possible level, but the heat was something I’ve never experienced before”, he says.

I expect the ‘South Africa Frederik’ to show up in Kona: “In February and March I put in new things, and it worked for South Africa. The hard work and the different approach during winter definitely payed off! Leading up to Frankfurt I did the traditional high altitude training camp (like the last six years) and I felt less aggressive than I was before South Africa. For Kona, I’ll do my preparation in the same way as I did for South Africa. I’m chasing a second victory in Kona. I think it’s realistic and I have still a few years to go. But I really need ‘the perfect day’ to make it happen again.”

If he wants to contend for the win in Kona, he has to limit the time he looses to the very strong bike riders and still be able to follow that with a superb run. It would require the next step forward in his development, but his dominating win in South Africa showed he is working towards these capabilities.