Last year Lucy was racing Kona for the first time as a Pro (she had raced before as an agegrouper). It almost seems as if she was a bit intimidated by the race and the field – and she didn’t have a good race, walking for most of the run with an injury she didn’t take the time to properly take care of as she was afraid she’d loose to much time in her Kona prep. Loosing her bike sponsor in the winter had her question the path she’d chosen – she’d decided to try Pro triathlon for a bit before returning to her career as a Medical Doctor.

After being back healthy (and with a new bike sponsor), she qualified for Kona without having to focus on points – a second place in the Regional Champs in South Africa took care of the bulk of points, and winning 70.3 Staffordshire put her in safe territory for Kona. Nonetheless she decided to race IM UK. “Winning on home soil is always special and this was the first time I’d entered a race with the sole goal of winning. I think this was probably the best race of my career to date and the support from the crowds was unrivalled.” After a 3:03 marathon she was leading by more than 30 minutes and could take some extra time to celebrate her win in the finish chute. 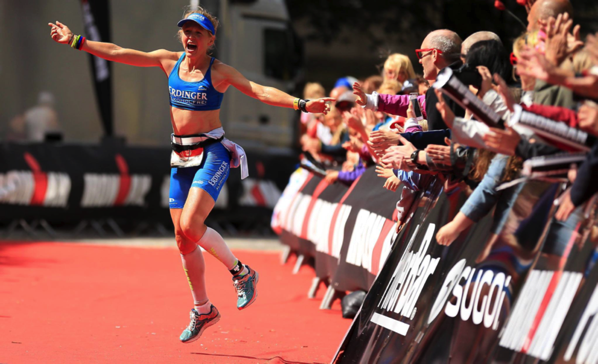 Going into Kona, Lucy feels very motivated to do well: “I’ve got unfinished business from last year! If I didn’t go back it would have beaten me – I don’t like getting beaten!” At the same time, she has learned from last year: “I’m definitely going into Kona much more rested. Last year I was digging myself a hole in the run up. This year I’m of the philosophy that it’s better to be fresh so have been far less scared of holding back when I’m tired.”

Lucy decided to do most of her preparation in the UK. “I have tried to stick to the formula that works for me: Keeping it fun and doing some low key races as training. I’ve done some decent time trials recently (100 mile and 50 mile) which have provided me with the confidence that I’m strong on flat fast courses as well as hilly ones.” (One should note that one of the ‘decent time trials’ was a 100 mile time of 3hr 48min – the second fastest 100 on record!) What about the Kona heat? “I’ve done a bit of heat prep this time – watt bike sessions in a hot yoga room. I’ve got a bit longer out in Kona this year before the race to acclimatise fully.”

What will be possible for Lucy this year? Based on the numbers, she should be just outside the Top 10. But as she has never really competed in Kona and usually races harder, slower courses she could actually do much better. Being a minute or two faster on the swim could have a big impact on what group she’ll be able to ride with and anyone who can run around 3:05 in the Kona heat will make up a lot of spots on the run. Maybe we’ll see her in the Top 10 this year? “I want to put together a race that lets me dance down the finish line smiling. If I’m doing that I’ll be proud of my performance. I know I’m fit so I hope I can do myself justice!”