Up until last year, David has been racing Olympic Distance, getting a number of Top 10 finishes in ITU World Triathlon Series races and fishing 7th in the 2014 Commonwealth Games 2014. This year he stepped up to longer distance racing. “The vibe at Ironman/70.3 events is very different from Olympic distance racing.  Athletes are a lot more relaxed around one another and there’s much better integration between the pros and age group competitors.  For me, racing in fewer races than I am used to has led me to being more excited to get out there and deliver when the opportunity comes.”

His start of the season was Challenge Dubai (as far as I can tell his fist race longer than Olympic Distance), and even if a 21st place finish doesn’t sound like much, his 1:13 run was faster than the split of winner Terenzo Bozzone. Still, he didn’t really know what to expect of this year: “Joel [Filliol, Davis’s coach] and I never really sat down and defined what success would look like for me this year, mainly because there were too many unknown factors.  How would my body adapt to the training?  How long would it take to get use to a TT bike?  How long would it take even figure out how to race these events? A lot of these unknowns I still desperately need to sort out and improve.”

David’s first Ironman was IM South Africa in March, loosing a bit of time on the bike but finishing the marathon in 2:54 and placing 7th. He had a couple of podium finishes in 70.3s against good fields and then raced his “home” Ironman in Bolton. Again, he lost some time on the bike (but was only four minutes slower than his mani competitors), but his strong run carried the day. His 2:51 was the fastest marathon of the day by quite a margin, and he won the race by almost five minutes! He also secured a Kona slot, so he is happy with his first long distance season. 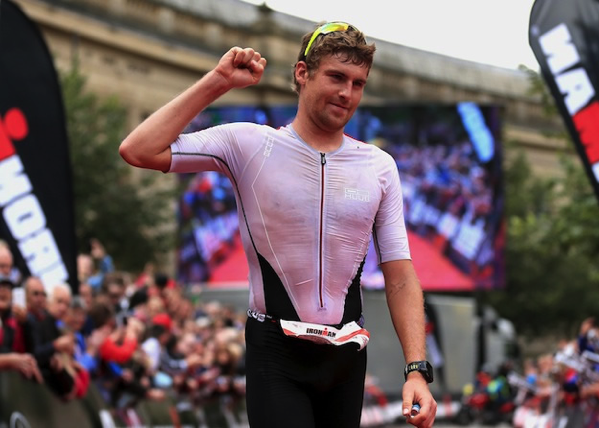 Coming into Kona, David still feels he has areas he can improve: “My main limiter is the current lack of ability to put out a good enough180k bike leg. Kona is currently the only race that matters, especially in the contenders eyes.  I don’t think I fully appreciated the importance of it, even the achievement of reaching it until this season.  The fact it’s only once a year, also the only time everyone goes head to head makes it more significant to the athletes than say an ITU Grand Final.  An average year could all of a sudden become pretty special if you deliver on the right day.”

Being the first time in Kona, there are not too many expectations on David. While he probably won’t make the first swim group, he shouldn’t be too far back. The main question for him will be how he deals with the ton of people that will blow by him on the bike: Most of the people that swim a similar time will probably put ten to fifteen minutes on the bike into him. If he saves his legs for the run, he may still be able to place well – for him that’ll probably mean a Top 20.