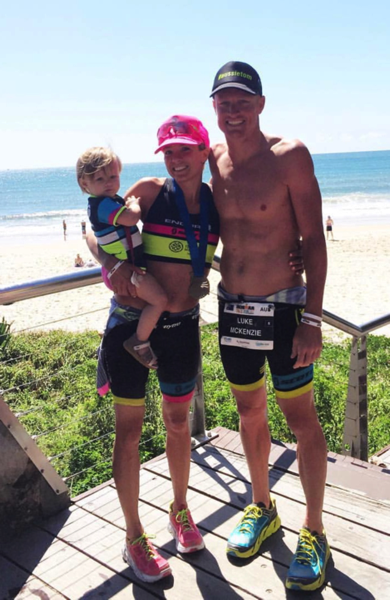 After his second place in Kona 2013 Luke struggled in the next season, still finishing fifteenth in Kona. A dominating win in Cairns shows that he has rediscovered his old form: “Winning Ironman Cairns was the highlight this year as a validation of consistent hard work.” Though at times the life of the “McGerdes Family” (Luke, his fiancee Beth Gerdes and their young daughter Wynne) seems a total whirlwind, they have managed to build an environment around preparing and racing triathlons: “The run work that I’ve been putting in with Beth consistently throughout this year is really starting to pay off. We love to see each other out on the course and it’s always a little lift to see the other one passing by. Beth actually stopped her race and shouted at me as I crested the final hill in Sunshine Coast 70.3 with Terenzo and it gave me the little push I needed to close in that final kilometer.”

Going into the year he identified his swim as one of the areas he needed to improve: “I’ve been working hard on it and have consistently swum better this year than last year. Moving to Australia allowed me to train with a local elite swim squad which I feel is invaluable. I feel really good about the swim heading into Kona.” A better swim will also allow him a slightly easier first two hours on the bike: “My main limiter in Kona are the tactics that go on at the beginning of the bike. I’m hoping for a race where I can race my own race.”

If his swim goes well he then be able to ride with Frodo from the start or with Sebi when the bike group breaks up. If he can follow that up with another sub-3h marathon he’ll be in a great position to fight for a podium finish. That seems to be what Luke has in mind as well: “I’d love to be back on the podium, the ultimate dream is obviously to win it. I think anything is possible.”