This post continues the analysis of the data from the recent Ironman Hawaii race. One of the consequences of the new KPR qualifying scheme was that every Pro who wants to race Kona has to race at least one Ironman in the year before Kona. Some athletes were even forced to race more often than they might have liked in order to get enough KPR points to be ranked in the TOP 50 (males) or TOP 30 (female). One of the concerns this raises is if this is going to have an impact on the Kona race. Or in other words, the KPR system probably did a good job of picking “the best athletes” for Kona, but did the qualified athletes race in top form or were they still tired from recent races?

What I’m analyzing is the impact of the “rest duration” to race results. “Rest duration” is the time difference in months between Kona and the race the athlete qualified for Kona (i.e. the the last Ironman race the athlete did). One caveat: The athlete may have raced other, shorter races, for example Olympic distance or even 70.3 races such as the 70.3 world championships in Las Vegas four weeks before Kona. However, these races probably didn’t add significant fatigue for the Kona racers – most of them focused on Kona and probably raced accordingly.

Here is a table that looks at the number of athletes who finished or DNF’d broken down by Rest Duration:

There are a few differences between DNFs and Finisher, but they are not very easy to spot:

When trying to decide when to qualify (or to validate a Kona spot), this could mean to race as early as possible, but the difference is probably too small to base a decision on this data.

There is some more interesting information when including the race performance into the analysis. I did this by comparing the “expected race time” (taking the athletes rating prior to Kona and conditions on race day into account) to the actual race time. This data is shown in the following graph: 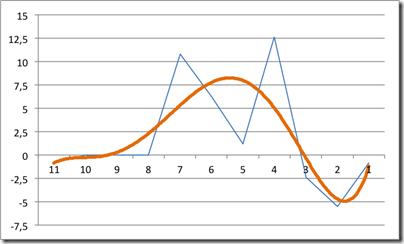 On the x axis, it shows the Rest Duration in months (shorter rest before the race to the right), on the y axis it shows the difference between the expected and actual performance of the athlete (in minutes, positive values mean that the athlete was quicker than expected). The thin blue line shows the actual data, the thicker orange line an approximation.

The data indicates that athletes with short Rest Durations (3 months and less) are not racing all that well (the data point for one month is just one athlete, so the graph may not even rise but continue to drop further). If an athlete wants to race well in Kona, their Rest Durations should be longer than three months. The data is not totally conclusive on what the “best” Rest Duration is (actual data pointing to 7 or 4 months, but the approximation indicates some value in the middle of this range). The data from this year does not show any positive or negative impact of really long rest periods (11 months).

Conclusions: What does this mean for pros and WTC?

For an athlete that wants to perform well in Kona, this means that they should seriously consider skipping the big July races (IM Austria, IM Switzerland, IM Germany, IM Lake Placid) and should avoid the August races (most notably, IM Canada). Interestingly, WTC has scheduled their new races exactly in the “not so good for Kona” timeframe: IM New York and IM Quebec have both race dates in August.

This analysis also  raises questions about WTC’s tries of establishing regional “Championship races” without hurting Kona. Other than the new race in Australia (IM Melbourne in March), these races are in July (IM Germany) and August (IM New York). It almost seems that pro athletes have to choose between Kona and one of the regional championships as it seems very tricky to race well in the regional championship and in Kona. This is certainly not in the interest of WTC and the people organizing the regional championship races. However, WTC may not have too much of a choice in this matter: An ideal date for a great Kona race (say May) is too early for the bulk of the athletes starting in these races that are not focused on qualifying for Kona.

One thing that seems obvious to me: WTC should move the cutoff dates for Kona qualifying by at least one month. Currently, these cutoffs are at the end of July (40 males, 25 females) and end of August (10 additional males, 5 additional females). In order not to devalue the July races too much, they should decide all spots at the end of July (or change the relations between the first second batches to 25-15 for May qualifiers and the same number for July qualifiers). Races after these dates would then count for the following year’s Kona race (so points from IM Canada 2012 should count for Kona 2013). This avoids some hectic racing in August: People that had to race in August in order to qualify, didn’t do too well in Kona – they were just too tired to race really well (think Mary-Beth Ellis).

I’m not sure if WTC is considering changes to the KPR. As far as I know, the system remains pretty much unchanged for 2012, but maybe we’ll see some adjustments for 2013. Other than some general grumbling about the KPR, I haven’t seen many specific suggestions how the KPR could be made better. Hopefully, WTC is going to solicit feedback on improving the KPR.

How many people have completed 12 IMs and will now be able to get a slot for Ironman Hawaii? (Part 2)
Ironman Florida 2011 Prediction