After WTC has announced the changes on the Pro qualification system for 2014 (see my post on the KPR changes and their impact), a discussion about the number of Kona slots for the Pro women has started. (Most notably, Rachel Joyce made a case for equal slots in her article on witsup.com about the new KPR system, and the issue has been picked up by a number of others.) I hope that by adding some numbers I can help to further the discussion of this issue.

The case for 35 women slots

Three different data points, all coming in at a similar result.

The arguments for more slots

Even if the number of pro athletes is different between men and women, there are a few arguments why the number of slots should be the same:

I’ll have a closer look at these arguments and some of the supporting data.

[T]his makes Kona a bit of a “closed shop” for women. … If we assume that the top 10 in Kona will in all probability get there again the following year, that means there are only 25 other spots open for the following year whereas men still have another 40 spots up for grab.

This theoretical observation is backed up by the data for the July qualifiers:

The idea of this argument is that the total number of athletes may be different, but that the “density” of the top athletes (say the top 50 that might be potential Kona racers) is comparable between men and women. I’ll have a look at this theory from a few different angles.

My interpretation of this data (taken from my post “Do Women have to race more often than men to qualify for Kona“): There is a discernible draw to qualifying for Kona, and athletes close to the cutoff carefully choose their races in order to maximize points. This occurs both for men and women and I can’t really see a gender difference here.

I’ve put together a list of the finishing times of this seasons Ironman races and have observed the following:

To sum up, a women’s race can be more exciting that a men’s race. However, if you want to properly follow the race, this requires a “clean” women’s race and similar coverage which is another issue that should be addressed by WTC and race organizers.

My own rating system (“Thorsten’s Triathlon Rating” or TTR) takes all professional finishes over the Ironman distance into account (not just WTC races, and also over a longer period of time than the KPR which just looks at the current season). Here is a graph that show the relative difference (in %) to the top ranked athlete (Andreas Raelert for the men, Mirinda Carefrae for the women): 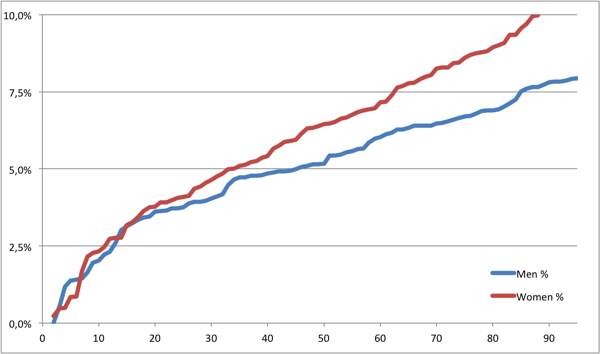 Again, we have a very small difference. The drop is about the same up to #20. After that, the men’s drop off is a bit slower than for the women, but nowhere close to what would be expected by the fewer number of female athletes. (For the data geeks: The slope between #30 and #95 of the men’s curve is about 0.055 percent per spot, that number for the women is 0.087 percent per spot. The relation between these is a factor of 1.58 instead of the expected number of about 2.)

Rachel has a clear point of view on this:

We count for half of the world’s population.  We should want to see triathlon be an equal sport in future generations.  What message are we sending out to kids taking up the sport with this disparity?

I would like to add two observations to this:

It’s hard to image that it’s not possible to accommodate 15 more athletes on the Kona pier. After all WTC manages to provide a number of slots to new races on the Ironman calendar (recent examples include Japan, Lake Tahoe, Boulder and Copenhagen).

I think the data that I presented here gives a strong indication that just looking at the number of professional athletes does not paint the full picture of the state of professional women’s Ironman racing. Personally, I’d be glad if WTC offers more women the chance to race as a professional in Kona.