This post looks at some data points on the Kona 2019 Pro field. There’s going to be a lot more information about Kona and the Kona Pro field in my “Kona 2019 Rating Report” that you can already pre-order here.

First, let’s have a look at how many Pro athletes are going to be racing in Kona and how those numbers have changed in recent years. I’m using 2011 as the starting year since the Kona Pro field has been pretty much around 90 athletes since then. In earlier years the Pro fields have been much larger – for example there were 148 Pro starters in 2009!

Here’s the graph that looks at the number of Pros broken down by nation: 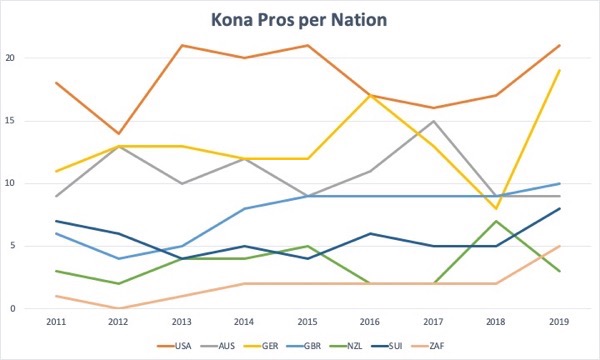 Kona Experience of the Pro Field

This section look at how the Kona field is changing over time.

First, a look at how often the Kona Pros have raced there before:

The next graph looks at what part of the field is athletes returning from the previous year’s race and which part consists of Kona rookies: 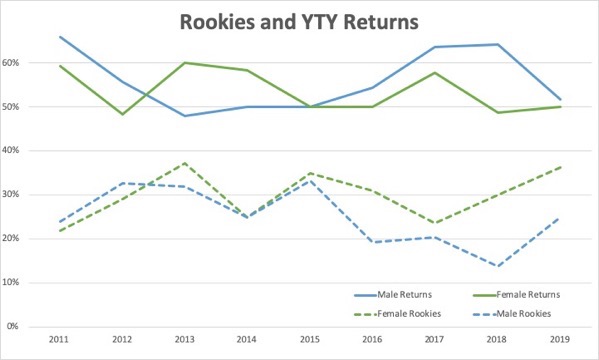 There is a bit more movement here:

It’s not quite clear why these changes have happened, but it’s quite likely that the new qualifying system has played a role.

Age of the Kona Pros

Here’s a graph showing the age distribution of the Kona Pros (click for a hi-res version):

It’s interesting to cross-reference this with the Age of Kona winners and some extra material for speculation.

The following tables look at the results each Kona 2019 Pro athlete has had on the Big Island in previous years.

There’s going to be a lot more information about Kona and the Kona Pro field in my “Kona 2019 Rating Report” that you can already pre-order here.