While 2016 Kona Pro Qualifying takes a bit of a breather after the fall races, I wanted to discuss a few charts and observations about this qualifying cycle. The KPR rules itself haven’t changed, but there are some subtle issues that will impact how the season develops.

Here is an overview of the Ironman races that offer qualifying points for the first cutoff at the end of July for Kona 2016. To be exact, the first of these races was IM Vichy on August 30th, the last ones will be IM Switzerland, IM Lake Placid (WPRO only) and IM Whistler (MPRO only) on July 24th.

The following table shows for each of the continents and months when IM races with a Pro category will be (the numbers correspond to the day of the race):

The only Ironman not shown here is IM Hawaii, which is an 8000 points race in October, but as a World Championship it doesn’t really “belong” to one continent. In addition, there will be some more Ironman races in August, but these haven’t been finalized yet and are not included in any further graphs.

The following chart shows how the total number of KPR points per continent has changed over the last few years (again excluding the August races but showing “Kona” as a separate category): 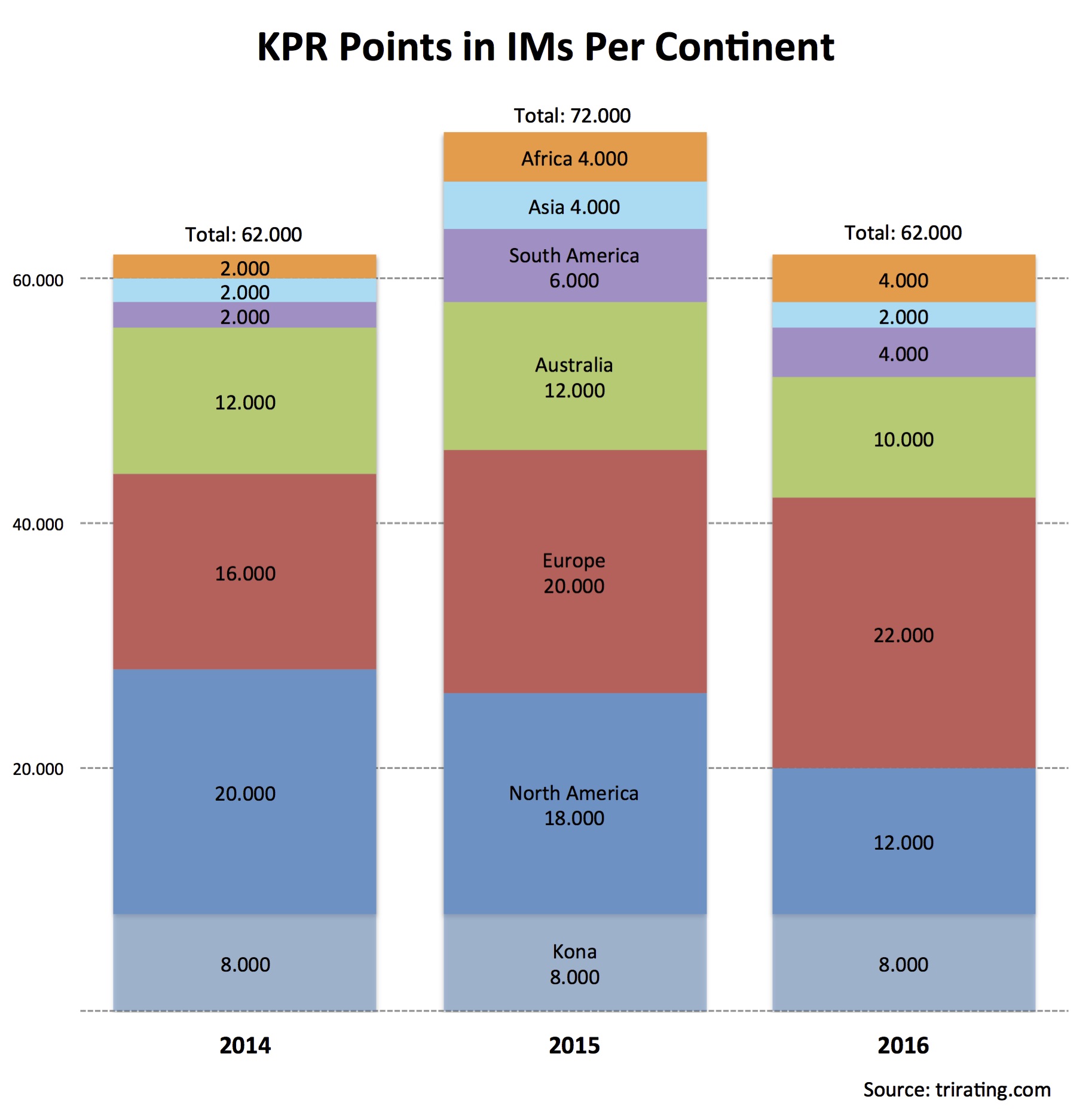 Some observations about the developments:

Some of these changes are short term changes that will probably be reversed in the following years, for example Ironman has expressed their interest in expanding in the Asian market. But I expect the trend of fewer Pro races to continue, and probably be extended from North America to other continents. The way I see it, this is a likely change for the expected 2017 redesign of the KPR.

Breakdown Of 2016 Points By Continent

The reduced number of IM Pro races has been most pronounced in North America. The following chart shows the distribution of the 2016 KPR points (excluding Kona) available in the different continents: 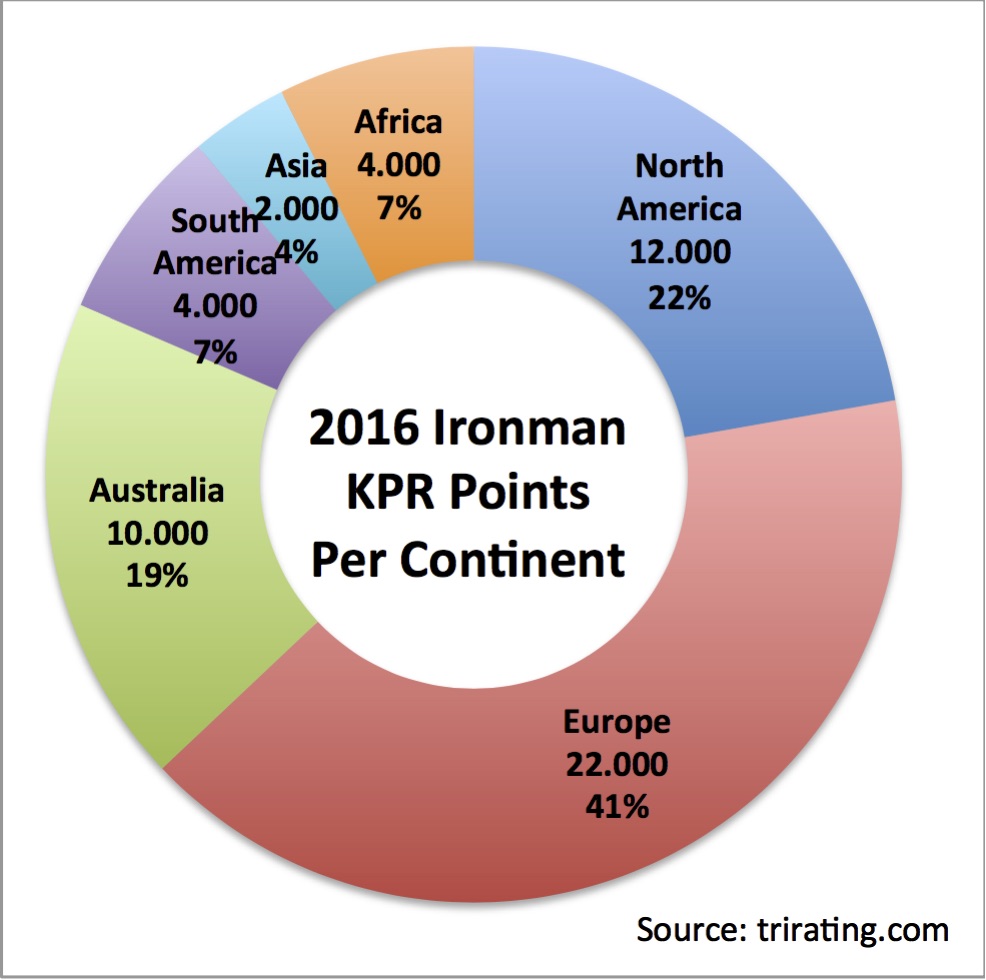 Breakdown Of 2016 Prize Money By Continent

There is less of a disadvantage for North America when considering the Prize Purse: 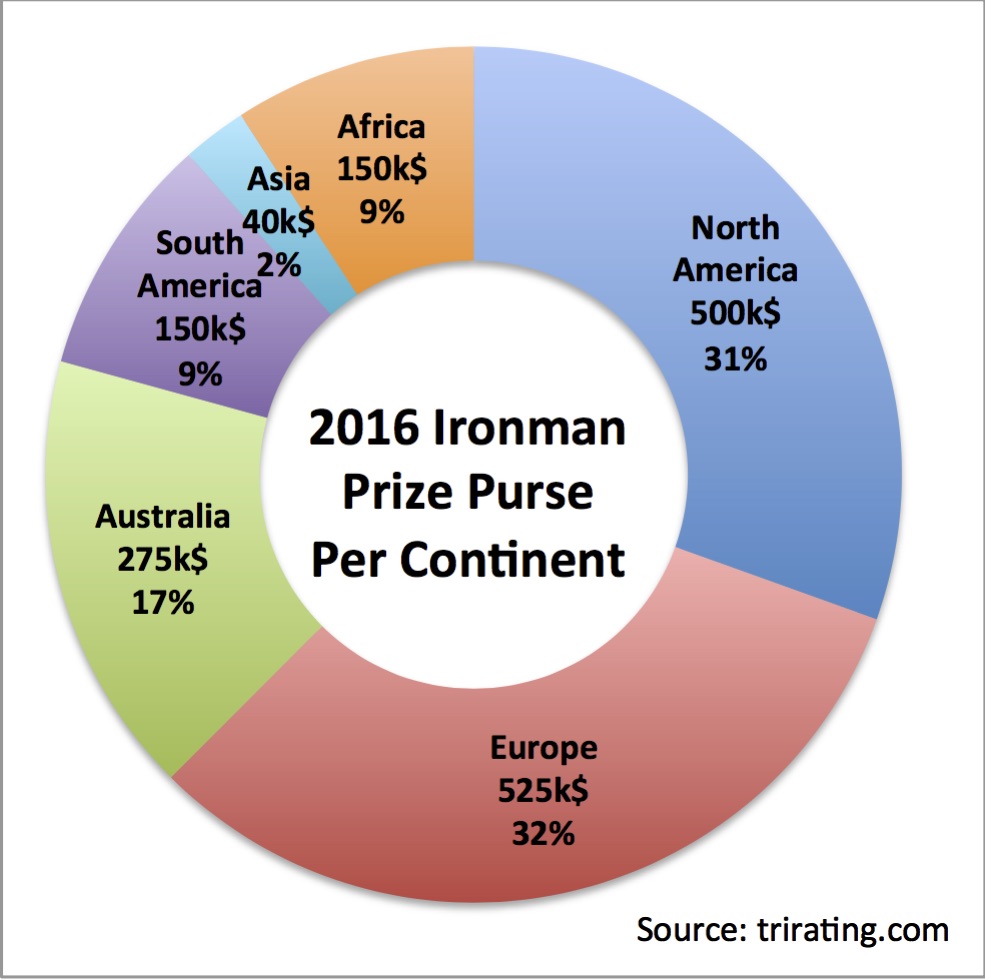 Most of the North American IMs are races with a 100k$ prize purse, while a lot of the European races only offer 25k$ for the field.

Breakdown of 2015 Pro Finishers Per Continent

To build an opinion if Ironman’s distribution of races is detrimental to North American Pros, one has to consider where the Pros are from. The next chart breaks down the number of Ironman finishers in 2015 season Pro races based on athlete’s nationality and corresponding continent: 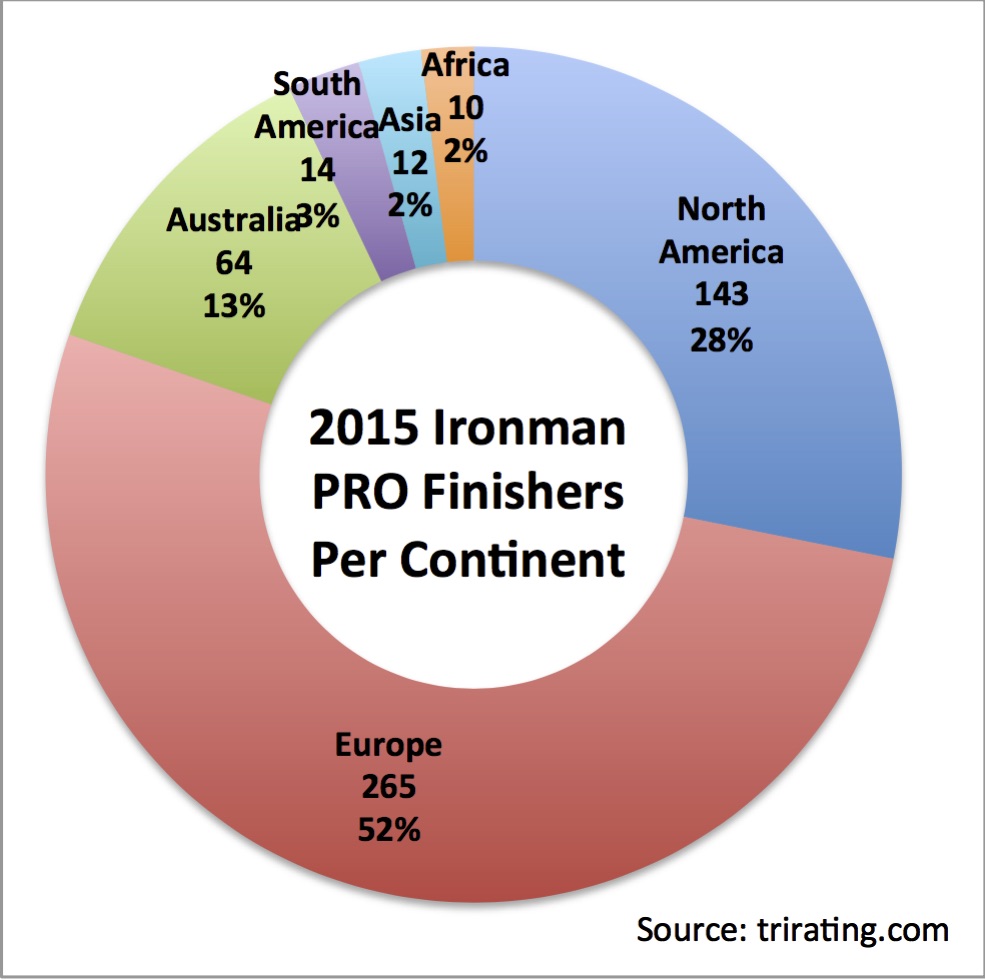 (I could have included a similar chart showing the number of Pros qualified for Kona per continent, but the distribution is almost identical and wouldn’t have provided additional information.)

Comparing the continents based on the nationality of athletes may not be completely fair to North America, as there are a lot of non-US athletes that have moved to the US or at least spend a considerable time there. But the number of IMs in North America is still roughly fitting as North America has a larger share of the prize money and also a larger number of 70.3s (in the 2015 season, there have been 17 in Europe and 25 in North America) which should help both the established Pros and the athletes still growing in the Pro ranks. However, qualifying for Kona as a Pro is more and more a year-round and global endeavor, one that needs careful planning and almost flawless execution.

If you are interested in Pro qualifying, you should subscribe to the 2016 KPR Observer newsletter!
More details can be found here.