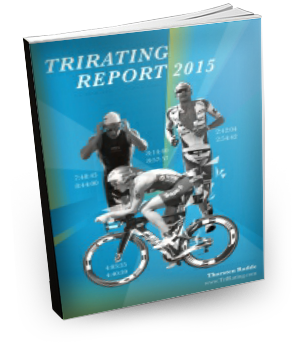 I’ve been busy working on my free TriRating Report 2015, more than 60 pages filled with results, data, and analysis about the 2015 season. This year I’ll be designating female and male “Athletes of the Year”, “Rookie of the Year” and “Comeback of the Year”. Of course the report also contains my Top 10 Ratings (overall and individually for swim, bike and run), the fastest 2015 times and best performances, 2015 Money Lists and a look forward to the 2016 Racing Season and to Kona 2016.

To test your knowledge about the 2015 season, here are a few trivia questions that will be answered in the report:

I’m sure that you’ll like what I’ve put together, so order today to re-live the 2015 season and get fired up for the upcoming 2016 races! The report is available for free, but if you want to you can show your support of my work by donating an amount of your choice. As always, thank you for your feedback and support!