By Thorsten on January 7, 2015 in ReaderInfo 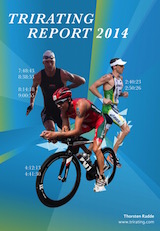 I have just released my 2014 TriRating Report, an “end-of-year” report looking back at the 2014 Ironman-distance races and my analysis of the results.

The Report has more than 50 pages, including:

and a ton of race results and all rated athletes!

A lot of people have asked how they can pay me back in some way for the information I’ve been putting out. In order to enable that, I’m releasing this report through Gumroad. The report continues to be free (you can just enter “0” as the amount), but if you like the report and want to show me your appreciation for my work, you can donate an amount of your choice. Regardless of whether you donate or not, feel free to share with others and enjoy!

Here are some Trivia questions on the 2014 season:

All answers can be found in the Rating Report!