Meredith Kessler had an interesting year framed by two impressive Ironman wins in March and November with sub-9 finishes, but injury worries and sub-standard performances over the summer and in Kona. 2016 started well for Meredith at IM New Zealand. She continued her winning streak that started in 2012 when bad weather shortened the race to a half distance. Also, with 8:56 she posted the first ever sub-9 in Taupo (of course a new course record) and also a new personal best marathon time (3:06).

Having secured her Kona slot, she seemed to be on a good track for a fast time in her planned summer race at Challenge Roth. But three sub-standard (for her level!) runs at the 70.3s in St. George, Raleigh and Mont Tremblant were indicators that something wasn’t quite right and she had to cancel her start at Roth. She had been dealing with a high hamstring/glute issue for some time, but her body didn’t respond to extensive rehab. In early July she decided that “it’s time to put this engine in the body shop for some serious work to get this injury sorted. I cannot come close to full speed on the run (or bike) and I am limping around the course – and I feel like I’m now just racing to fulfill contracts and appease sponsors as I never want to let anyone down. This also pains me because Roth is a bucket list race and it was the marquee event on my calendar and we were so looking forward to it! But sometimes we have to take some steps backwards in order to come back stronger and better.”

Meredith would need some time to recover after the procedure and racing 70.3 Worlds wasn’t going to happen. So her ‘comeback race’ from the injury was Kona. Race day started well for her: She worked hard to be the first out of the water, leading a large group into T1. Then she was also riding well, finishing the bike in 5th place and within a minute of the podium spots. She took this as an indication that her ‘Kona ailment’ (not having any power on the bike in the Kona heat, possibly because kidney issues kept her from processing fluids and calories) is under control. But once on the run, she quickly fell back, eventually walking to a 4:19 marathon: “Rehab is rehab … what I mean by this is that you never know how your injury is going to react until you get into a race which is tough to simulate in training. The high hamstring wasn’t quite ready in Kona and drastic pain was felt on the run. I decided to again respect the finish line and put a smile on my face and embrace the opportunity to even get to be there.”

Similar to the 2015 season Meredith decided to race IM Arizona just six weeks later. She was trying to recover quickly from the long day in Kona, but in typical Meredith fashion also dealing with any weak points the Kona race had uncovered: “We can go into this race knowing that we have done everything to get this high hamstring ready to go since it obviously was not quite ready in Kona. Hopefully the new treatments and the new bike fit will stick, and it will stay strong out there. Injuries can just be pesky – and this one sure has been! Yet I’m hoping that I have served my time in the injury department.”

Her last Ironman of the season turned out to be as much a success as the first one in New Zealand: Another win, another sub-9 finish and her second ‘active three-peat’! “Ironman Arizona was a question mark yet the body can be resilient and thankfully it held. I use racing to see where I’m at with injury. I am so grateful that my injury didn’t get worse after IMAZ, if anything it got a wee bit better … all the rehab was finally starting to come together.” 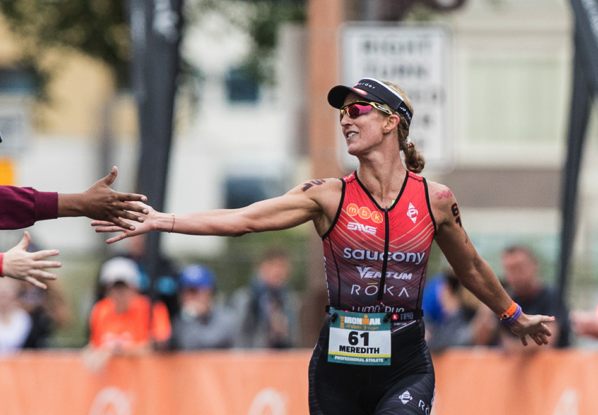 Winning Taupo 70.3 in December was another milestone for her: “I had not raced at half Ironman speed for a long, long time – not once in 2016 since St. George, Raleigh and Mont Tremblant 70.3s were a nightmare of pain.”

Clearly, Meredith is taking a lot of positive signs from the ups and downs of the 2016 season – and she is already looking ahead to 2017 racing: “I’m just so grateful to finally get back to myself and now have this winter to really, properly prepare for Ironman New Zealand. We will continue to rehab and work on things to get better until the first race of the year at Ironman New Zealand – I am thankful for the chance to race for a six-peat … we love Taupo!”