By Thorsten on November 8, 2013 in Interview

Dirk Bockel is the best known triathlete from Luxemburg. For some background on his Ironman career so far, check out my post „Dirk Bockel in Numbers“. This year, he was going to Kona with great hopes after winning Roth in 7:52, but didn’t finish the race in Kona. He was kind enough to answer some of my questions about his race and his future plans. 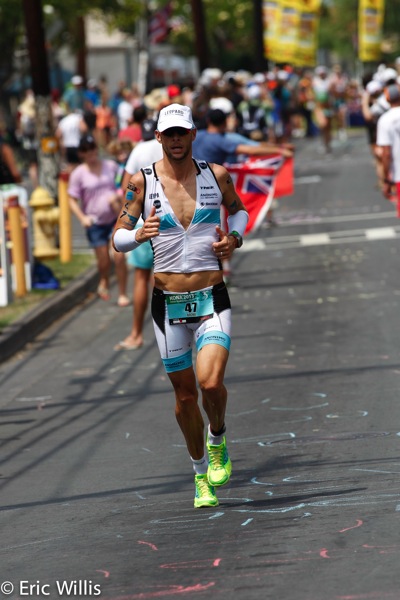 Thorsten: Dirk, what lead to your DNF in Kona?

Dirk: It was a bit of a disaster. I really don’t know how it happened. There are so many rumours that some of the drink we got on the course might have gone bad. I have never thrown up in a race before, and it happened to some other athletes as well. So the fact is that something happened on the course which was outside of my control. Until that point I was having a great race but with the stomach cramps and throwing up I had to climb into an ambulance. I’m still upset about that.

T: In the last years, you already had a lot of KPR points after Kona. Basically you just had to complete an Ironman to get your Kona slot which you did by winning in Regensburg in 2012 and by finishing Cozumel for 2013.

D: If you just have to validate, it’s relatively easy. But you still have to finish an Ironman and it’s a long day! Cozumel was one of those things that shouldn’t happen. I got injured during the race, had to stop 20 minutes and tortured myself to just walk to the finish line to qualify. I’m not sure if this is the best qualification system, but those are the rules. If you want to race Kona, you have to play by the rules that WTC makes.

T: This year, you have to find a way to qualify starting with no points after Kona. Have you decided how to approach the 2014 season?

D: I haven’t made up my mind whether I continue to race Hawaii and do the qualification and all that comes with it, or whether I do races like Abu Dhabi and Challenge Roth. Both options are there, and both options are pretty extreme. I don’t really see the point in qualifying over the whole year and to basically race for very low dollars just trying to get points. As a professional, you also have to look at some of the money races in order to make a living.

T: What do you think your season would have to look in order to be able to qualify for Kona?

D: There are not too many options. It doesn’t really make sense to race now – it’s offseason and I wouldn’t be in good shape. Even if I forced myself to race, I could really underperform and then not get too many points. I could wait till next year and then do one of the regional championships like Melbourne or Frankfurt. Even winning a normal Ironman just gives you 2.000 points and you roughly need 3.000 points. Plus you have race obligations with your sponsors and then you still have to do Kona! In our sport you just can’t race that much. People looking for good sponsorship deals might have to do that, but it’s not the smartest thing. It’s not good for your body and for your own future.

T: So qualifying for Kona and racing well in October seems very hard to do.

D: Yes, Kona is such a special race. You have to sacrifice a lot of your season to perform well in Hawaii. But your whole season has to be planned around qualifying. It’s always at least one Ironman so you never know what happens. Usually one Ironman is not enough, so you have to race another one. Racing three or four 70.3s instead is also not a solution – it’s a lot of travelling, a lot of time investment and financial investment. You don’t get much out of it, so it’s a win-loose situation. The company WTC wins, and the athletes have to race a lot to qualify. They can’t properly prepare for a peak performance. Then you have to race Hawaii but you’re already tired from racing all year to get the points.

T: Do you think there should be changes in the KPR to allow athletes to focus on Kona?

D: As an athlete, I don’t make the rules, but I definitely want to give constructive feedback to get a better system. I think that if you post certain times, for example sub-8 hours, you should be qualified for Hawaii.  It would be great to score Kona points in non-WTC races. Also, if you medal at the ITU Long Distance World Championships or had a TOP 10 in Kona, you should be qualified without the need to validate. The reason for their recent changes to the KPR was to discourage athletes from racing six or seven Ironman races just to qualify without a chance for a top spot in Hawaii after so many races.

T: But there are still a lot of Pros racing in the KPR system.

D: If you want to qualify for Kona, WTC more or less binds athletes to their events. There are also athletes that have a deal with WTC to get paid to do a certain number of races. That’s a good thing but not too many people know about that. In terms of transparency both for the athlete and the company, everybody should know who is supported by WTC.

Some athletes don’t have great sponsorships that allow them to focus on Kona, they are looking for other options. I think I have only counted 20 athletes returning to the Kona, it was upsetting to see less and less people being there. Maybe Challenge comes up with their own „World Championship“.

T: Coming back to your 2014 season, will it be possible for you to try to qualify and also race Challenge Roth in the summer?

D: If I have to chase Kona points, I’ll have to sacrifice Roth which would be terrible. I really want to defend my title. It was the nicest race by far that I’ve done in 25 years of my triathlon career. It would be a pity to sacrifice that just to go to Kona.

I’ll probably start my season around March, either in Abu Dhabi or Melbourne, in the summer it’s either Roth or Frankfurt. At the end of the year it’s a choice between another Challenge long distance race or World Championships in Kona again.

I’m really torn apart sitting between two chairs, and I have to make a decision pretty soon.

T: You mentioned that your deal with Leopard Trek ends in 2013. How is your financial situation for 2014?

D: I’m blessed with new sponsors for the next few years, and will announce them in the very near future. They’ll probably make my decision a bit easier.

Dirk, thank you very much for your open answers. All the best for your 2014 season! I hope that you can look back a year from now and say you’ve made a good decision.