Dirk Bockel is the best known triathlete from Luxembourg. I his home country, he is approaching the popularity of the famous cycling brothers Andy and Fränk Schleck. After his DNF in Kona this year, he is facing a difficult decision about his 2014 plans. I’ve had a chat with him about his choices and will post about it soon. But first I’d like to introduce Dirk with one of my “Numbers Profiles” and give some background on his Ironman career so far.

The first time I noticed Dirk was when he was leading the Olympic Triathlon race in Beijing 2008 for a long time on the bike and on the run, eventually finishing 25th. He then switched to long distance racing, here is a table of his Ironman races:

As usual, there are three main data points for each race in addition to the splits:

It’s easier to spot the trends in the following graph: 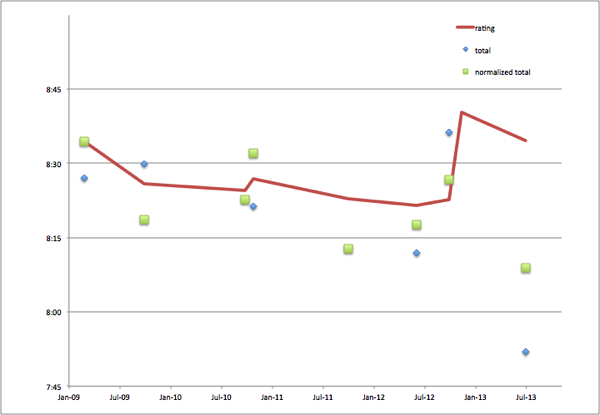 After his great Beijing performance, Dirk prepared for longer racing, and immediately had great results. In his first Ironman in New Zealand 2009, he managed to qualify for Kona with a solid 3rd place behind Cam Brown and Terenzo Bozzone. In his Hawaii debut he finished 7th in almost the same time (8:29 vs. 8:27) but a much better normalised performance. In 2010 he had more solid results: He finished 8th in Kona (again improving his rating), then quickly punched his Kona ticket with a 3rd place at IM Florida. (His normalised time was a bit slower, but  that’s not surprising so soon after Kona.)

2011 saw him make another big step forward: He finished 4th in Kona with his best time so far (bot total and normalised). After a fast bike he was still able to post a solid 2:53 run. He was only beaten by Craig Alexander, Pete Jacobs and Andi Raelert, who ran between 2:42 and 2:47 to beat him.

He’s had another good season in 2012. (If you haven’t seen it yet, you should watch the great documentary on his 2012 season.) He won Ironman Regensburg and was in great shape for Kona. Unfortunately, he broke his hand a few days before Kona. He was severely handicapped during the swim (requiring a splint), and had problems grabbing bottles on the bike. He didn’t quite have the day he wanted, but pulled himself together to finish in 10th place. 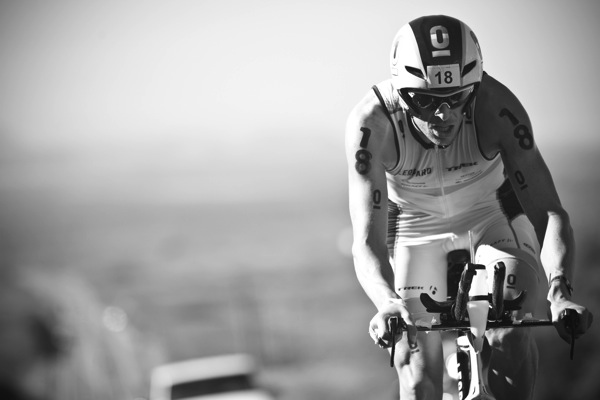 After Kona, he quickly validated his Kona slot by finishing in Cozumel. He ran into problems on the run, and hobbled into the finish, posting a slower run leg than on the bike. Still, he finished to make sure he could he qualified for Kona 2013. (You can clearly see the impact of this „bad race“ in the graph above, the total and normalised times are well outside the area of this graph, and his rating takes a big upward spike.) In the summer, it looked as if he managed to leave all these problems behind: He raced solo on the fast course in Roth, posting the 6th fastest time ever and also the fastest time since the world record performances in the summer of 2011 by Marino (7:45 in Austria) and Andi Raelert (7:41 in Roth). (He spoke at length about the race in his interview on the IMTalk podcast.)

Again, he seemed to be in great position for Kona. He was in the lead group after the swim. He let the „über-bikers“ do their thing on the Queen K, but finished the bike in 5th place and in a great position for a podium finish, less than four minutes behind eventual winner Frederik Van Lierde and 3rd place Sebastian Kienle. Unfortunately, his run did not go as planned and he had to DNF with nutritional issues, like a lot of other athletes this year. More about this and his plans for 2014 in my interview with Dirk.

One Response to Dirk Bockel in Numbers