As women will need more KPR points in order to qualify for Kona, the question has been asked if women have to race more often than men for a Kona slot. This post compares men’s and women’s number of Ironman races, KPR points and points per race.

Here’s a graph that shows the number of races for men and women: 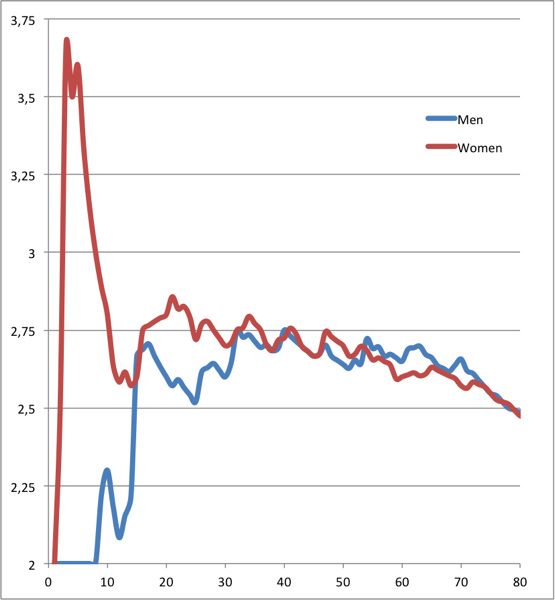 The red line shows the data for women, the blue line the men’s data. On the x-axis, the graph shows the position in the KPR ranking, the y-axis the average number of IM-distance races that the first x number of athletes have races. (E.g. the data points at 15 show that the men and women between number 1 and 15 in the KPR rankings have raced a similar average number of races, about 2.6 races.)

At first the two graphs diverge a bit. This is caused by a few “outliers” of well-placed women with a large number of races:

At about the July cutoff place for women (#28) the graphs are closer together, but women have raced slightly more often. The difference is about 0.2 races – pretty small, and probably caused again by a few outliers (Mirjam Weerd: 5 races, Mareen Hufe and Ashley Clifford 4 races).

After that, the graphs are very close together and the differences are only statistical blips. My interpretation of the data: There is no meaningful difference between the men’s and women’s number of races.

The explanation of the different cutoff numbers for men and women is very simple: It is caused by the women’s cutoff occurring at #28, while the men’s cutoff occurs at #40 – obviously you need more points to place 28th than to place 40th.

But then the next question comes up: Is there a difference between the number of points required 28th (or 40th) between men and women? Here’s a graph that can help answer that question: 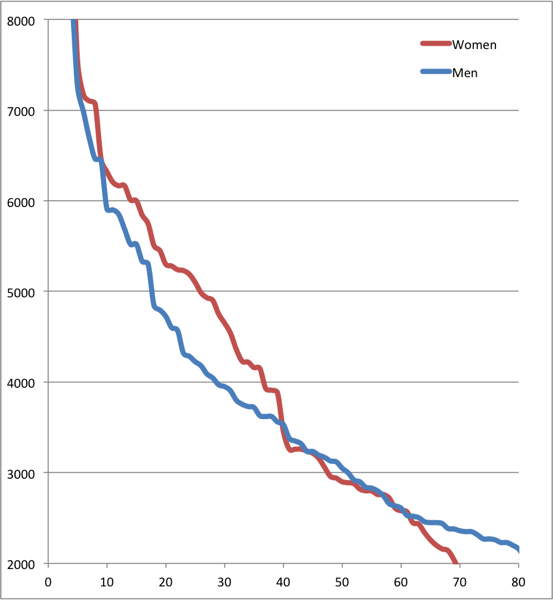 Gain, the graph shows the place in the KPR rankings on the x-axis. ON the y-axis, it shows the number of points required to rank that high.

There is a clear separation of the two graphs around the women’s July cutoff of #28, it’s almost 900 points. The graphs narrow again at the #40 spot and stay pretty close together until about #60.

My interpretation: Women placed around #28 have a larger number of points than their male counterparts.

Putting both observations together

From the two graphs shown, we have two observations for the KPR spots around #28:

There is only one way I can see that these two observations can both be true: Women must be making more points per race. So here is a third graph: 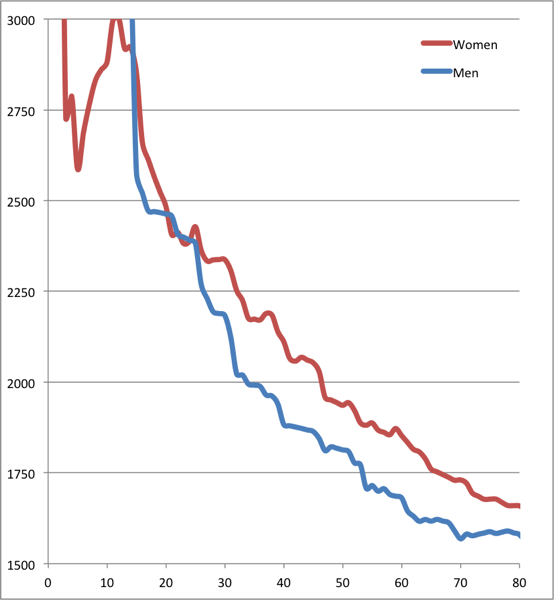 The graph displays the average number of points per race on the y-axis. After the initial movements in the graph settle down, we can indeed see that women make more points per race: The difference around the #28 spot is about 150 points per race.

I’m assuming that this means that the women’s fields are not quite as deep as the men’s, so it is a bit easier to make more points for the women. However, the difference is quite small – 150 points is about the difference of 2 spots (5th place and 7th place, 6th to 8th etc) in a P-2000 race or 4 spots in a P-1000 race.