In an earlier post, I analyzed the implications of shortening the gap in Kona between the Pro Women and the Age Group Men from 25 minutes (as it was in 2012 and 2013) to 20 minutes (as it is currently planned by WTC for 2014), suggesting that a 25 minute gap would allow for a much cleaner women’s race.

In an interview with Triathlete, Mirinda Carfrae describes the discussion between some of the top Pro Women and WTC regarding the start gap in Kona:

So we were all devastated as soon as they said that. In the end they compromised and gave us 20 minutes from the age-group men.

How bad would a 15 minute gap have been? Here’s the graph (for a general description and comparison to the 20 and 25 minute graphs, please check out my initial analysis) for a 15 minute gap: 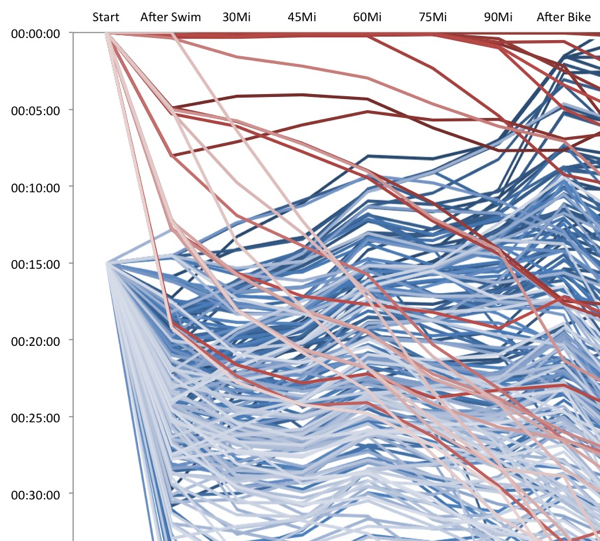 However, I think the gaps between the AG men around the Pro women wouldn’t be worse at 15 minutes than at 20 minutes:

Here is a table comparing my assessments of the three different gaps that have been suggested:

Essentially, the 20 minute gap is more similar to the already rejected 15 minute gap than to the preferred 25 minute gap. So even if 20 minutes sounds like a fair compromise between 15 minutes and 25 minutes, it really isn’t. I don’t think that a lot of this data was apparent at the time that the gap was discussed, and I hope that the last word has not been spoken for 2014.