Kaisa has been eying long-distance triathlon for a long time: “The first time I heard about this sport was when I was only 12 and my father told me about it. I instantly thought that it would be something very cool and so on one beautiful day I went out and did the longest discipline of IM, the 180 km ride, on my little pink mountain bike. After that I knew that Ironman would be my passion! However, I ended up swimming and didn’t start triathlon until high school. Then it was the Olympics I was heading for. My whole ITU career was packed with injuries and after one of those in the summer 2015 I really started to think what I want to do with the rest of my career. I felt in my heart that I have to follow that childhood dream and to go for Hawaii. So here I am!”

Her first Ironman race was IM Barcelona in October 2015, and she was in the lead from the start: “I never thought I would be the first out of water. Then on the bike I was leading all the way without knowing how hard I should push as my plan has been to follow the other women, not to go faster than them! But I started a little too fast and was pretty tired at the end of the bike, so Yvonne caught me at T2. During the marathon I was scared the whole the time: It was my first time running that distance so I did not know how it would be after 30k. Towards the end I was sure I would faint but somehow I survived until the finish line.” She makes it sound as if she exploded and barely walked the last 10k – but in fact even an experienced Ironman athlete such as Yvonne Van Vlerken was able to put less than three minutes into her. Kaisa finished in 8:48, the fourth fastest time of the 2015 season!

Going into her next IM, the African Regional Championships in South Africa, she was looking for a solid 5th place that would put her firmly on the road to Kona. She had another great day, and when some other athletes had problems (including Jodie Swallow who crashed on the bike when the helicopter was getting close to her), Kaisa ran a 3:02 marathon, the fastest of the day, and won the race and an automatic qualifier slot. “It was quite a surprise, winning was amazing! My feelings were a bit mixed as I was very happy to win the race and get my ticket to Kona, but at the same time I was sorry for Jodie as it is never nice to win when someone has been forced to pull out because of bad luck. But my goal in Ironman racing is to find my own limits and to do my very best on race day, so I don’t want to focus too much on what everybody else is doing.”

After qualifying, Kaisa was very much looking forward to Kona, but didn’t feel too much pressure to place well: “My goal was to enjoy the experience of fulfilling that childhood dream! My goal was just to do a solid race without blowing up and to collect as much experience as possible for the next years. My coach Paul Sjöholm and I thought that Top 10 might be possible.” Her ‘Sport for Good’ teammate Timo Bracht mentioned her as a solid Top 5 contender: “I did not believe it when Timo told about that Top 5 prediction!” But in the end Timo was right, and Kaisa had a great Kona debut. After a slow swim she didn’t panic but worked for the first two hours on the bike to ride up to Mirinda Carfrae’s group: “For some reason I swam a little too easy and getting out of the water I was full of energy and excitement. After I caught Rinny I was riding with her for a while, then took up a faster pace again. I did have a goal wattage but I started way too fast and blew up a lot more than planned.

“After a slow T2 I caught Rinny at about 1k. At this point I could not believe that I was running with her. The audience was incredible and I got so excited that I overtook Rinny and at some point I heard that I had a lead on her of more than 15 seconds. Timo ran in the other direction and was yelling to me not to be crazy and to slow down. Then I got scared. I knew I was in real trouble, what a rookie mistake! Rinny caught me and I was trying to go with her for as long as I could so I would get some draft advantage in the head wind, but soon after the 10k mark I had to let Rinny go. I had to dig really deep and recalculate what might be the fastest pace for my body to do the marathon without having to crawl at the end.”

Jay Prasuhn captured Kaisa getting water from Peter Reid in the Energy Lab – it’s pretty clear she didn’t recognize him: 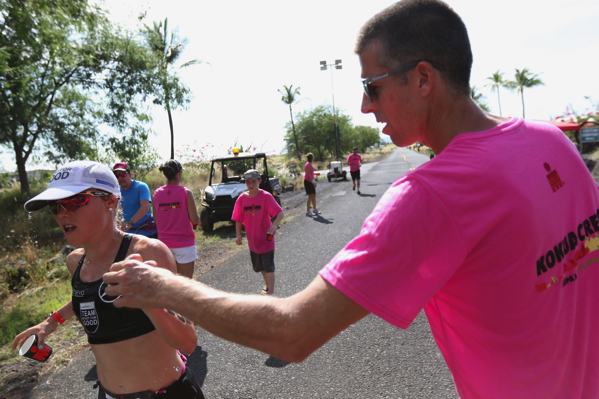 “I was so dead that the only thing I could think about was to go straight and to survive to the next aid station! But quite cool to see that Peter Reid gave me water – thanks a lot to him!” Again, she makes it sound as if she completely blew up, but she finished in fifth place, lost only five minutes to Mirinda Carfrae and towards the end almost caught fourth place finisher Anja Beranek.

Kaisa received a lot of attention in her home country: “Triathlon is now a quite fast growing sport in Finland and it has been very nice to see that my performance has inspired new people to try this sport. However, the most heart-warming welcome after Kona I received from some of my best training mates – the lovely grandpas and grandmas with whom I share the lanes in the local pool every morning. They bought some beautiful flowers for me and were all incredibly happy and proud of me!”

After Kona, Kaisa made some changes to further improve over the long distance. “I now have a new coach, Siri Lindley. We were working with my former coach Paul Sjöholm for 18 years but after Kona I really felt that I needed someone more experienced with IM racing to be able to take the next step. Of course it was not easy for either of us to let go from our long term relationship, but this change gave us both great new opportunities. His biggest strength and passion is in Olympic distance and coaching younger athletes – maybe not so much in coaching this ‘old diesel machine’. Despite of our paths going in different directions, Paul will always stay as one of the most important persons behind my sports career.

“I saw Siri in Kona at one swim session where she was coaching Mirinda, and I said to my boyfriend that it would be so awesome to have that kind of a positive and passionate coach one day! So when I contacted a few coaches around the world this autumn, Siri just felt best for me. It’s a great honor to join Team Sirius.”

Siri is also happy to work with Kaisa: “Kaisa is such a great athlete, and a phenomenal human being. I am so excited to have the opportunity to really work with her. Training her specifically for the great challenges of Kona, our goal is to build up her strength, fitness and speed so that she can be consistently performing at the highest levels, while staying healthy, motivated, happy and fulfilled!

“The training she is doing now will be quite different to what she is used to. It is exactly what she needs to get to the next level of performance. We are an amazing fit as athlete and coach, and are one million percent committed to achieving all new levels of performance, and fulfillment in the sport. We are both so excited to embark upon this great journey together!”

Kaisa describes how they plan to work together: “I was in Boulder for ten days in late November so Siri and I got to know each other. Now for the winter I will be training in Spain so the coaching will happen through TrainingPeaks and Skype. In the spring I will go to Boulder for about six weeks and then also for at least three months before Kona. I really look forward to these blocks in Boulder as that will be the first time for me that I’ll be training with other world class Ironman athletes!”

The coaching change is a clear sign to me that Kaisa has bigger goals in mind than just another fifth place finish in Kona. It’ll be interesting to see what improvements she will be able to make under the guidance of Siri in the next years.