There can’t be any doubt about this year’s male Rookie of the Year: Patrick Lange’s win at IM Texas and his third place in Kona with a new run course record were big surprises, and his “can’t believe it myself” finish in Kona was one of the emotional highlights of this season.

Patrick’s background is in mountain bike racing. Injuries after a “stupid crash while warming up” forced him to take a break from MTB racing and he started cross training and triathlon. He’s had some success in short distance racing and was part of the German national youth squad. But he was always a couple of seconds too slow in the swim, and missing the front group kept him from being competitive on the international level.

He moved up to middle distance racing in 2012 (7th at 70.3 Wiesbaden) and got his first Pro podium at 70.3 Luxembourg in 2013. He enjoyed the freedom of setting his own schedule and planning his training. He was racing the “big races” with deep, strong field such as St. George or the 70.3 Champs, and while he was picking up paychecks he didn’t have any breakthrough podium results.

After the end of his 2015 season he started to work with Faris Al-Sultan. “Faris and I had met a couple of times in training camps in Lanzarote, rode together a few times and much enjoyed chatting with each other. We were joking that he’d be coaching me once his career was over, not expecting that he’d be ending his Pro career after Texas 2015.” Faris adds that “I was hopeless trying to coach my now-wife Ina, but as I was always self-coached and put a lot of thought into training– still making a ton of mistakes.” It seems that Faris is not making too many mistakes with Patrick: When Patrick moved to long-distance racing for the 2016 season, he immediately found great success.

Patrick didn’t really know what to expect going into the Regional Championships in Texas. A big field of more than 50 male Pros offered strong competition. Faris was hoping for a 2:48 marathon which could result in finishing between third and sixth. Patrick was able to swim and ride with a larger group, being in 5th place in T2 but there were about 15 athletes within a minute of him. It was quickly apparent that he was the best runner of that big group: “My legs felt really good and even holding back I ran 20 seconds per k faster than planned.” When Andy Starykowicz was forced to DNF after having built a big lead on the bike, Patrick stormed to the win with a 2:40 marathon, earning an automatic Kona qualifier slot.

IM Texas 2016 suffered from finding a decent bike course after construction made the old course unusable, issues with getting permits for a new bike course and then some more changes after flooding. In the end the bike course that was used measured roughly 94 miles (instead of 112 or 150k instead of 180k) and it made assessing his performance tricky. For other athletes I didn’t use the Texas results as a basis for predicting Kona, but as Patrick’s only long distance race was Texas, I had to do some number juggling. In my “Kona Rating Report”, I seeded Patrick in seventh place – pretty similar to Faris’ expectations (“2:48 marathon resulting in a finish between 5th and 15th”). His home stay in Texas (where he prepared for Kona) gave him another boost: “I was thrilled with TriRating’s 7th place seeding, but my host father said he thinks that I’ll do even better than that.” 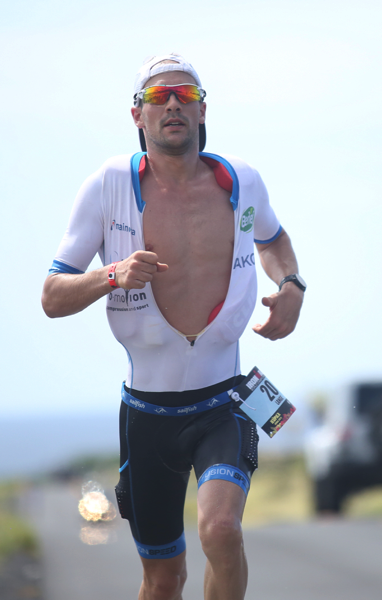 In Kona Patrick swam well (less than a minute off the top swimmers) and had closed the gap to the front when he received a penalty. “I was overtaking a number of athletes and probably took too long to overtake when the group was speeding up again.” According to the rules it was drafting, but to me it sounds more like he was not yet experienced enough to properly deal with the larger groups and the hectic pace at the start of the Kona bike. Andi Raelert was in the penalty tent with him and encouraged him to stay relaxed even after dropping back into 42nd place. Patrick decided to “do my own race” and did not try to chase the front group. Even though he lost another five minutes on the bike to the leaders, he slowly started to move up in the field – at the start of the run he was ten minutes back in 22nd place. He was about as fast as Frodo and Sebi for the first 10 miles of the run and by the time he climbed Palani Road he had moved into the Top 10. By the time he hit the Energy Lab, he had run up to his friend and training partner Boris Stein, moving into 6th place. Each athlete he passed gave him more and more energy. At the end of the Energy Lab he was able to see third to fifth place in front of him on the Queen K, and he picked off Tim O’Donnell, Andi Böcherer and Ben Hoffman to move into third. By then he was flying and when he crossed the finish line he was clearly on an adrenaline high. His run split was 2:39:45, beating Mark Allen’s 1989 run course record. “While running I was just checking the splits on my GPS. Faris and I were hoping for about a 4-minute pace [per k, about 6:24 per mile, equal to a 2:48 marathon] and I was just happy to build a cushion to that pace. I had no idea of my overall time.” In his Slowtwitch interview he says “When Mike Reilly announced that I broke the course record, I looked at Mark and said I’m sorry. I really look up to that man.” Mark appreciates the gesture: “Patrick was great. He apologized for breaking my record! Super nice guy.”

There was a bit of a controversy in the days after the race whether Patrick’s run was the fastest marathon in Kona after all. For example, here’s what Dave Scott said in his interview on ‘Breakfast with Bob – Championship Edition‘: “When Mark Allen and I raced in 1989, our time in T2 – off our bikes, changing into shorts – was folded into our run time. My friend Pat Feeney had Mark run the marathon in 2:38:53. Patrick Lange had a phenomenal run and in the record books it’s going to go down as the fastest run ever – Mark Allen holds it though.” Similar data was mentioned in a 2013 article by Triathlete magazine (“Chasing the 2:40 Hawaii Ironman Marathon“).

To me, it’s pretty much impossible to compare Mark’s time from 1989 and Patrick’s time from 2016 – 27 years apart. First of all, not only the time spent in T2 is a difference between these two runs, they were also done on different courses (even if similar). The last major change to the run course was in 2003 when the pier in Kona became T1 and T2. Before that there were separate transition zones, and the run course included a section called ‘the pit’, a hot and steep section that probably made the old run course harder than what it is today. That’s also the way I understand Dave Scott’s comments: Not as a dig against Patrick’s performance, but as an acknowledgment of how awesome Mark’s 1989 run was and of the breakthrough that duel meant for the sport of Triathlon. Mark simply says “Patrick broke my record. I’ll let others debate the finer points of that.”

Almost everyone I spoke to agrees that it’s quite unlikely that we’ll see an explosion of sub-2:40s in Kona. Mark says “Patrick’s time could reinvigorate the guys and get their minds working on having that be the new standard they need to be able to hit to win in Hawaii. It’s very possible to break 2:40 in Kona, not even a question, even sub-2:35 is doable. But I don’t think that you’ll see everyone suddenly running at that level. The main reason is that Ironman Hawaii is a closed energy equation. You just can’t go super-fast in one place unless you go slower somewhere else. And the guys who win have pretty much fine-tuned that equation and so far no one has gone under 2:40 and won the race, which ultimately is the goal of most of the top people racing … to win.”

After Patrick flew back home after the race, he received a lot of media attention in Germany. When he landed in Frankfurt there were a couple of friends and members of his local Tri and swim teams to welcome him – in addition to at least three local TV and radio crews. Then he just quickly went to his apartment for a change of clothes and flew on to Berlin where he appeared in ‘Morgenmagazin’, Germany’s main ‘breakfast TV show’. Over the next days there were some more TV appearances and a lot of interview demands.

What can we expect from Patrick in the next years? Faris is trying to set the expectations not too high: “Patrick is still ramping up his training, the main goal will be to stabilize his performance.” In the long term, Patrick could be an athlete to put some pressure on Frodo – Patrick is a potential front-bike-group athlete with the ability to maybe run faster than Frodo. Therefore, Frodo might feel he needs to be more active on the bike and put a buffer between him and Patrick in T2. That’s maybe a bit too much to expect from Patrick in the next season or two, but at 30 years of age he still has a lot of Ironman racing ahead of him!