Similar to last year, IM Vichy was a quick race, especially on the bike. A slow, non-wetsuit swim (more on that in the women’s results) was followed by a very fast bike and a quick run, leading to an overall adjustment of 14:48 and a new course rating of 15:41.

Not shown in the results is Diana Riesler who was DQ’d after the swim in very dubious circumstances. In line with the Ironman rules (that were re-affirmed in an email before the race) she wore a swim skin over her race suit, that was deemed reason for disqualification by the French officials who were using the French rules for non-wetsuit swim (only one layer of clothes).

Update on DQ’s During the Swim

In addition to Diana, there were at least four more other Pros who were disqualified (Xavier Torrades, Ludovic Le Guellec, Pierre-Yves Facomprez, and Urs Mueller), though the results don’t show at what point they were qualified and for what infraction. There were also reports of a number of age group athletes who were disqualified for “illegal equipment” during the swim. Here is my best understanding of what happened. (Please note that I have not been on-site, the following is based on a number of Tweets, Emails and posts about the race.)

At the Pro meeting it was announced that the swim would be non-wetsuit because of the water temperature. There was a discussion about what was allowed to be worn in addition to a swimskin. Ironman rules state that a race kit can be worn underneath as long as the race kit (and swimskin) do not extend beyond the elbow or the knee. Contrary to that French rules (that take precedence as Vichy is a French race) require a “one layer only” rule. I haven’t seen the exact wording of the rule but it means that no speed suit would be allowed to be worn over a race kit. In the discussion during the race meeting that was softened/clarified so that underwear would be allowed to be worn under the swimskin. (Apparently that means shorts and also a sports bra for women.) Diana has written that based on this information she would not have worn a speed suit but would have just competed in her race suit.

After the Pro meeting an email was sent out to the Pros. This email included the following “Ruling Update”: 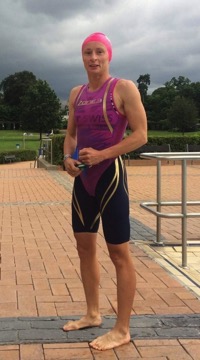 Based on this email, Diana decided to use the swimskin after all, see her outfit on the right.

While this would be perfectly legal in most Ironman races, she was disqualified immediately after the swim. She was completely frustrated as she tried to follow the rules as best as she could with the information provided – as did a number of other athletes. She reports that a number of other athletes that also wore their race suit under the swimskin were not disqualified.

I think that Diana was under the impression that the “one layer rule” had been lifted, but another sentence in the email sent to the Pros could be interpreted that it was still in place:

.. You are permitted to wear your race uniform under your swimskin during the swim portion, provided it is rolled down and is not covering your shoulders and upper arms and nothing is covering your legs below the knee.

This sentence isn’t completely clear – if it is rolled down how can it over the shoulders? Others I have shown this sentence interpreted it in a similar way to the old IM rule: If you have a race kit that covers your upper arms, then it needs to be rolled down for the swim. But based on what happened in the race, I think that this sentence was to highlight that you couldn’t fully “wear” your race kit under the swimskin.

To me, this whole episode highlights the following key points:

Any lack of clarity in rules or communication usually has to be shouldered by the athletes – as shown in Vichy where a number of athletes received a DQ without really knowing why.