Even with the smaller field this year, the athletes in the Busselton race posted fast times, mainly aided by the flat bike course. This year’s adjustment of 14:52 is almost the same as the course’s new rating of 13:15. Compared to last year, the windy conditions lead to the swim and bike being a little bit slower, but allowed for a quicker run. 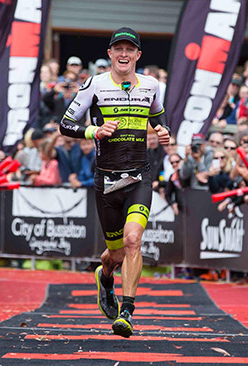 Luke McKenzie had a fantastic day of racing: It only took him 20 miles to erase his two minute deficit after the swim, and he never waited for anyone to set the pace on the bike for him. Before the race he had said he couldn’t see “a 4:15 bike split happen” – instead he annihilated the 4:18 bike course record by Mitch Anderson with a fantastic 4:08 bike leg (the second fastest in 2015)! He followed that up with a 2:52 marathon which was within a minute of his IM marathon PR (a 2:51:37 from Louisville 2009). Combined, this gave him a new Ironman PR, also improving the old course record (8:03:55 by Jason Shortis from 2006). In addition, this is now the fastest time on Australian soil, beating the old record of 7:57:44 by Craig Alexander from Melbourne 2012. The Australian Iron-distance record is still held by Chris McCormack (7:54:23 from Roth 2007).

It took more than 20 minutes after Luke for the next athlete to cross the finish line: Defending champion Denis Chevrot had a good race but with Luke’s fantastic day it was clear he was only in a race for second place. There was a close race for third place, Per Bittner managed to hold off David Dellow who had the best marathon of the day.

Jens-Petersen Bach in fifth had a good comeback race after a string of injuries, while Christian Kramer had to pay the price with a 3:07 marathon for trying to limit the distance to Luke on the bike.

A small, but fast field of women made the female race very interesting. In her IM debut race, Georgie Rutherford led the race into T2 but she struggled with her nutrition for the rest of the day. Yvonne Van Vlerken took control of the race on the bike and quickly built a lead over Dimity-Lee Duke who swam a few seconds faster. But it quickly became apparent that the real threat for Yvonne would come from the pair of Mareen Hufe and Sarah Piampiano who had lost four minutes to Yvonne in the swim but were keeping the difference under control. Towards the end of the bike Mareen was eating a bit into Yvonne’s lead, and she was second in T2 about three minutes back putting about three minutes into Sarah. It was quickly apparent that Sarah would have the best run of the three leaders, and when Yvonne had to walk a bit after vomiting, Sarah took the lead and managed to build a solid lead. What a fantastic year for Sarah: A year ago she raced Busselton as her comeback Ironman race after being forced to take some time off with a broken leg, now she can look back to a great season of racing including qualifying for Kona, finishing seventh there and winning her first Ironman title! (She’ll still have some goals left for 2016: Sub-9 finish, a sub-3 marathon and I’m sure she’d love to be on the Kona podium – qualifying has already been taken care of.) 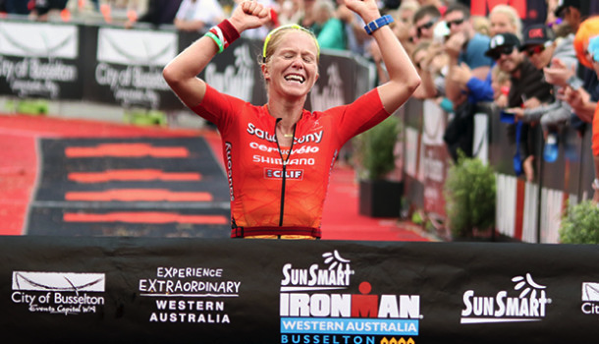 Behind Sarah, Yvonne continued to struggle with food poisoning and Mareen managed to have a good run until the finish. (In Kona she was in the Top 10 less than 5k from the finish but then had to walk for most of the rest.) After crashing at Mandurah 70.3 and struggling for a while with her injuries, Mareen finished in second place and scored valuable KPR points to keep Kona qualifying in reach. Yvonne’s 9:12 finish would have been good enough to win a number of Ironman races, in Busselton it resulted in a third place. She’ll only need a few more points to secure a Kona slot (placing well in a 70.3 should be enough for her). But first it’s time to take a break to recover from a lot of hard racing in 2015!