Looking through the Kona splits of the Pros, one odd result caught my eye: Shiao-Yu Li, the first Taiwanese athlete to qualify for Kona as a Pro, has splits up to 25.3 miles of the run, but no finish. I was intrigued: Was there a last minute meltdown in the finish chute? I started to ask around and found that I was not the only one who wondered what was going on. Fellow Pro Ruth Brennan-Morrey remarked:

I’m curious: I came out of the water with Shiao-Yu Li. She left T1 first, then she was 15 minutes up from me at mile 11.4! In the end, my bike split is 5 minutes faster than hers, so I should have passed her. I never saw her.

I’ve had a slow 1:10 swim, but I thought I’d still be faster than Shiao-Yu. I was a bit surprised when I overtook her on the Queen K, but focused on my race.

Shiao-Yu’s splits also offer an explanation of what likely happened: After T1 she wasn’t registered before 11.4 miles on the bike, she didn’t have any splits at the 5 mile and 7.8 mile marks. All of a sudden she had a big gap to Ruth, and while she swam about 20 minutes slower than Daniela Ryf, she was only 9 minutes behind at the 11.4 mile bike split. 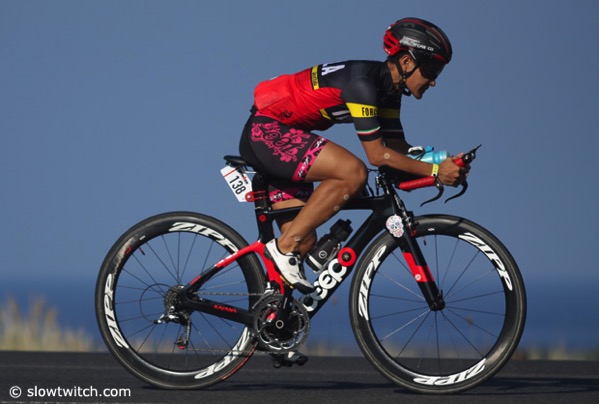 It’s pretty obvious that Shiao-Yu must have cut some part of the early course. Her friend and manager Trisha Chen relates what happened:

Shiao-Yu is a person with very very poor sense of direction. After jumping on her bike and starting to chase others, she unfortunately missed the first 8 K of bike course. The accident happened because when she was about to turn to the right following a volunteer’s direction, another volunteer told her to go to the left.

We all knew that recognizing the course is athlete’s responsibility, however, sometimes the race has been very tense and mistakes might be made by both volunteers and athlete.

Her description is not 100% clear, maybe Shiao-Yu Li turned left coming up Makala Blvd out onto the Queen K instead of starting the loop through town. Another possibility is that she made a U-turn on the Queen K instead of turning right onto Palani Road and then down to the “Hot Corner”, cutting a major part of the loop through town that normally ends with a U-turn at the end of Kuakini Highway. Kona seems to be a pretty simple course to follow, especially considering that Shiao-Yi raced Kona before as an agegrouper. But an inadvertent wrong turn during the race seems much more plausible to me than an intentional course cutting since that is very easy to detect in Kona. Shiao-Yu must must have been confused about the directions and probably just went the wrong way.

Pretty soon she thought she might have been mislead and missed some kilometers in town because some stronger swimmers came up behind her. She immediately called upon one referee who was at around 10-20K on bike course and told him she thought she might have missed the previous course. The referee asked her whether she was sure about it or not. And he told her that since no one reported this and he did not know what to do and since she did not get a penalty back then, she should keep going. She even went to the penalty tent to ask if she could redeem the missing course by adding extra time. But since she did not receive any punishment from any referee, she could not do anything but keep going.

Shiao-Yu felt very very uncomfortable during the whole 180K. She wants to compete in honor and honesty!!

It’s probably during the discussion in one of the penalty tents that Shiao-Yu was overtaken by Ruth. The discussion must have cost a fair bit of time as well: In the end, her 2015 bike time (about 5:40 if you add 15 minutes for the 8k she missed) was slower than her 2012 time of 5:29:31 when she participated as an age grouper.

Still Finishing After All

Back in T2, Shiao-Yu tried again to correct her mistake:

After retuning to T2, she spent almost 20 minutes to find different referees, confessed to them that she was missing the course. However, since no referee or no one accused her upon his matter, it is only Shiao-Yu’s confession and honesty to be the evidence.

We are hoping that there is another way to redeem such mistakes (adding extra times…) so that athletes can still have a second chance to finish the race. After all, athlete all fought hard to get to Kona.

But the rules for not following the course are very clear for Ironman races:

Basically, the rulebook does not offer any way for her to correct the mistake she made, even if it allows for her to continue the race:

(a) […] If disqualified, an athlete may finish the Race unless otherwise instructed by a Race Referee.

(c) […] Neither timing splits nor Race results will be listed for disqualified athletes.

Her result would still be a DQ, but she wanted to continue:

But Shiao-yu never quit a single triathlon race before in the past 13 years, even when she was hurt in races. In her mind, no matter what happened, she would do her best and manage to run to the finish line. So she expressed her strong desire to finish this race anyway.

After Shiao-Yu continued the race, she ran quite well and you could see her cross the line in the live coverage. Some results show her completing the run in 3:24, for now the “official” Athlete Tracker on Ironman.com lists her as a DNF. Even though she is disappointed with this year’s race, she looks forward to the next season:

Shiao-Yu felt comfortable about her strength and power and she believed that she still has great room to be improved. She has been much motivated to prepare to go back to Kona again.

While Shiao-Yu is struggling to swim well after being hit by a motorcycle while in high school, she has been steadily improving on the run. She probably needs some off-time after Kona. In order to get enough points to qualify, she had to race five Ironman races this season: Malaysia (4th), Taiwan (4th), Lanzarote (4th), UK (5th) and Japan (1st) – all before racing Kona 2015! If she manages to step up to finish more often on the podium, she has a good chance to qualify again for Kona. Hopefully she’ll have a better race then!

A big thank you to everyone who helped with this article, especially Trisha Chen for sharing Shiao-Yu’s perspective (and Caroline Livesey for putting her in touch with me) and Herbert Krabel (Slowtwitch) for permission to use the photo.