It’s interesting to look at the comments Nils has made last year before Kona: “I don’t know what to expect and where I fit into that incredible field of athletes. A good Kona result is one of my main goals for the future. In 2014 I’ll find out my initial situation. Then I can start to chase the better-placed athletes year after year. Hopefully I won’t have so many to chase!“ Not many people knew Nils before last year’s Kona – after his 6th place that’s going to be a bit different this year!

He started his 2015 season by lining up at the Regional Champs in Melbourne. He posted a new bike course record, building an 11 minute lead. But he wasn’t able to hold on to his lead when he started to struggle around 30k into the marathon, eventually running a disappointing 3:04 marathon. But that race secured his Kona slot and he was ready to focus on his summer race Challenge Roth. Last year he took the lead on the bike only to be run down in the end by Timo Bracht. This year Nils never left any doubt that he would win the race. His 7:51 is the third fastest time of the year. “Clearly, my win at Challenge Roth is the highlight of the year so far. The fast time was the icing on the cake.”

His only “sub-par” result this season was 70.3 Champs in Zell am See – he was still in a decent position coming off the bike, but was only able to finish 22nd. “My bad result in Zell am See gives me extra motivation. There was a lot going wrong both before and during the race.”

But for Nils the main race of the season is Kona: “To be honest Roth already feels as if it’s been ages ago – I’m totally pumped for Kona. Of course my season has gone well so far, but I want to deliver another great performance in Kona, ideally my best performance of the year. The attraction of Kona can’t be compared with any other race. Kona is the race where everyone tries to be in top shape. The combination of a one-day event where a lot can happen with the Ironman history – there is nothing better in our sport!”
After last year’s great debut, what’s Nils’ goal for this year? “I’d like to show a performance on the same level as last year and be active in race. If I can do that, a good place will take care of itself.” Has he identified any weaknesses after last year’s race? “I’ve only raced Kona once, and didn’t really show any glaring weaknesses there. But there are a lot of small things that make a difference. I was surprised by the speed at the start of the bike with a number of pace changes. That’s one of the areas I’ve been working on … I know that it takes a while for me to get used to the heat and humidity. That’s why I’ll spend all of September in Texas where the climate is pretty similar to Kona. Last year I’ve done a similar preparation in Florida and it worked pretty well. Once I was in Kona I adjusted much quicker than if I had come straight from Germany.” 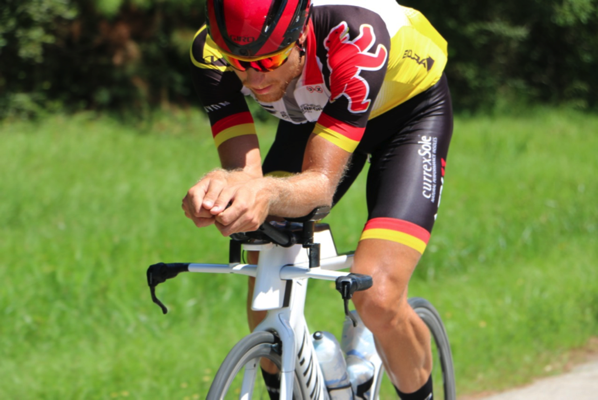 Nils may not be as much in the focus as the main German contenders, Sebastian and Frodo. For example there was a lot of press when Frodo showed off the new Canyon Triathlon bike in Frankfurt. It went pretty much unnoticed that Nils was on the same model just one week later (you can see the bike and its distinct aero bottle and speed box in the picture). But it’s clear that he is focused on a good performance in Kona, not only in this year but in the long run.

After finishing in the Top 10 on his debut, his next logical step forward would be a spot on the podium and Nils is definitely one of the contenders. But at 29 years of age, he is still young for an Ironman triathlete and can afford to take a few more learning years before stepping up. I think just repeating his Top 10 from last year will be a good result for him – we have seen a lot of athletes that have finished well and then struggled the next year. He has the strength in all three disciplines to adjust to a changing race – he should be able to swim with the front group, then stay with the first group on the bike or even go with the faster bikers when they ride away. His run in Kona last year has shown that he’s still able to run strong in the last 10k when the final ranking is decided. We may end up with an all German male podium this year!