In March 2011, K-Swiss announced that they would pay 1 million $ to the German brothers Andreas and Michael Raelert if they finish 1-2 in Kona later that year. Both were considered strong contenders for the October race: Michael hat recently become the first 70.3 champ to defend his world title (winning both the 2009 and 2010 titles in Clearwater), and Andreas had two great Kona results in 2009 (3rd) and 2010 (2nd, only beaten by Chris McCormack after running with him until the last aid station).

Since then, the brothers struggled a bit to put together solid seasons. In 2011, Michael was slated to give his IM debut in Frankfurt but had to cancel because of hip issues and decided to wait another year for his Kona debut. Andreas posted a fantastic world best time of 7:41:33 in Roth, but still had to validate his Kona slot by „walking“ IM Regensburg in order not to aggravate a slight injury. He posted another podium result in Kona (3rd behind Craig Alexander and Pete Jacobs). In 2012 they both qualified for Kona, but only Andreas had a good race (2nd behind Pete Jacobs) while Michael finished 31st. 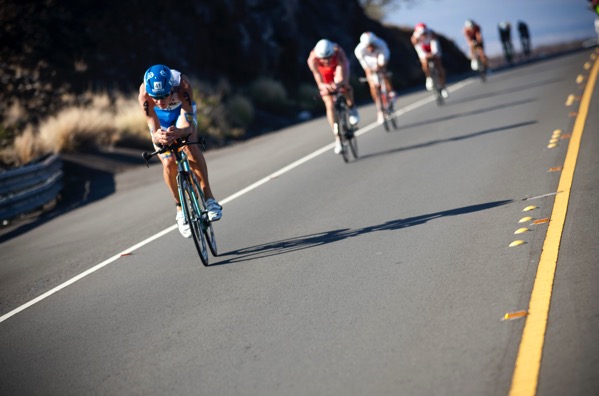 Michael Raelert at the front of a bike pack in Kona 2012 (Photo: Jay Prasuhn).

2013 saw them both struggle with injuries: Michael hurt his knee when he crashed with his mountain bike. He still managed to finish 7th in IM Germany, but then had to undergo a procedure to remove inflamed tissue. Andreas won IM Austria in a fast 7:59, but tore some muscle fibers in his glute. For the first time, he DNF’d in Kona. 2014 didn’t start much better: Andreas still wasn’t completely healed from his injury, had a DNF in Frankfurt and barely managed to get a last minute Kona slot after racing in Mont Tremblant. In Kona, he was in a good position until the middle of the run when he had severe stomach problems and had to walk home. (He still finished in 10:49 with a run time 45 minutes slower than his bike.)

Michael crashed again on his mountain bike in the spring, but even though he hurt his face the injuries healed quickly. He was on fire in the second half of the year, winning a number of 70.3s in Australia and also the inaugural Challenge Bahrain. 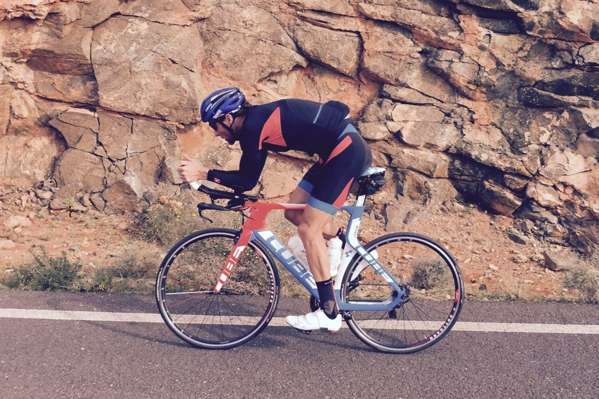 Andreas Raelert getting ready for the 2015 season in Mallorca (Photo: Raelert-Brothers).

I’ve had the chance to discuss their 2015 plans with them.

Thorsten: What’s your focus for the 2015 season?

Michael: We are still working on some of the details, but Kona will be the main focus for both of us. I have already started my season, my next race will be 70.3 Mallorca (early May).  I’m not sure where I’ll do my Ironman race, but it’s great to already have enough points.

Andreas: I will start my season at 70.3 St. George and will race at Ironman Texas.

T: Andreas, what’s your view on having a good summer IM and performing well in Kona? Other than in 2014, the winner rarely had a big result in the summer.

A: That is very hard to tell. Sebastian showed that he can perform well in Frankfurt and in Kona. But you can only do that with a strong base and smart periodization.

T: It seemed that you really wanted to perform well in Kona 2014 even after qualifying very late. Wouldn’t it have been smarter to collect some solid points and take your chances in 2015?

A: It’s next to impossible to race Kona „going easy“. It is a special race, and I always want to race my best there. Racing well in Kona is why I’m in the sport, it’s what I love. I still want to see the name „Raelert“ among the Kona champions. Having a 1 million $ prize on winning there was a great sign of respect, but it doesn’t influence how I race.

A: I don’t think winning Kona is a question of age, but how well you feel. Crowie has shown that you can still perform well if you manage to focus on your training. I’ll be doing Triathlon as long as I believe I still have a chance to win – at least for another two or three years. It would be great to stay injury-free and know in May where I stand and then be able to focus on preparing for Kona.

T: Michael, when you won your two 70.3 Championships you were dominating that distance. Was moving up to the full distance too early?

M: With Regensburg, Kona and Frankfurt I have only done three IMs so far, so I haven’t really moved up yet. The training volume is pretty much the same, regardless of whether you are training for Olympic Distance, 70.3s or Ironman races, the difference is more on the mental side of racing, of being patient for a long time.

M: I think I was doing pretty well over the middle distance lately :-). I still have some catching up to do on the run, after all I missed thousands of kilometers when being injured. I’m working hard to improve some more.

T: Did you or your coach Wolfram Bott make any changes to your training because of the injury?

M: I think it’s important to take your time and not make the second step before the first one. When we started to work with Wolfram in 2012, it was to add some new stimuli to our training. Now he also takes extra care to make sure we’re doing the right things. There are situations where I need someone else to tell me when to back down a bit.

T: If you qualify for Kona, how will you approach the race? Just as a learning experience?

M: I’m similar to Andi – just participating is not enough for me. When I start, I want to compete for the top spots.

T: You are marketing yourself as a single brand „Raelert-Brothers“. How is that working out?

A: We love it that we have our little family business – in addition to Micha and me there is also my girlfriend Julia and our middle brother Sven. Together, we have found a lot of loyal partners. Most recently we have added Swiss Side with their fantastic aero wheels.

T: Thank you for your time. It would be great to see both of you have a successful 2015 season!