This is another guest post written by Stef Hanson, the Chief of witsup.com, the next post in our series on female Kona contenders on each other’s sites. (If you want my more “numbers-oriented posts”, head over to witsup.com!) Thanks, again Stef!

Australian, Mirinda ‘Rinny’ Carfrae knows what it takes to win in Kona. She found herself on the top step of the podium in 2010, in only her second attempt at the Ironman World Championship. It was also actually only one year after her debut at the iron-distance where she had come second at the Ironman World Champs, and had broken the marathon record at the time in 2:56:51 – fair to say an impressive debut performance. Two years later in 2011, Chrissie Wellington reclaimed the fastest marathon time back, but she had the record for less than three minutes when Carfrae crossed the line in second, grabbing that record right back again which she still holds in a time of 2:52:09.

So in her time racing on the big island, Carfrae has had a second (2009), first (2010), second (2011) and a third (2012). She is the third fastest woman ever on the island behind Chrissie Wellington and Paula Newby-Fraser in a time of 8:57:57 (which is the fourth fastest time overall – Wellington has the two fastest, then Newby Fraser, then Carfrae), and, she has gone under the nine hour barrier twice, a feat that has only happened six times on the island ever – twice each to these three women.

So what has happened in those years since she put together her winning race in 2010, and nailed her fastest time in 2011? What has Carfrae changed to get back to that top step again? The professional women are hungry for the win, but surely this athlete is hungrier to regain her crown?

For seven years, Carfrae had been with her coach, Siri Lindley, with only the last couple of those seven years being focused on the iron-distance when she stepped up in 2009. At the start of 2012, Carfrae had a case of the seven year itch and decided she wanted a bit of a change and went out on her own for a while. She coached herself for the first year essentially, speaking with mentors, other athletes, and confidants to help her with her training. Of particular note was Matt Steinmatz who is well known in the industry, particularly when it comes to cycling and bike fits. He helped Carfrae with her cycling training, and she took care of the rest. 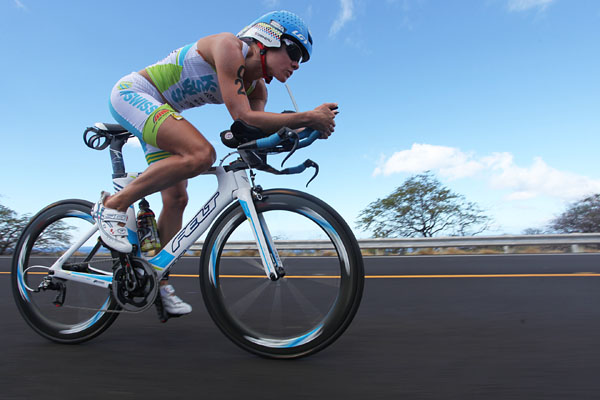 However, Carfrae, despite learning a lot from Steinmatz, found that she wasn’t enjoying the process of writing her own program, and so enlisted a new coach, Joel Filliol. However, despite Carfrae’s respect for him, she just didn’t find that the match was right, and she was lacking the enjoyment in what she was doing. All signs seemed to point back to the great relationship that she had with Lindley. To Carfrae, one of the most important parts of her success, was her relationship with her coach. The comfort, the enjoyment and trust she had, well has, with Lindley was and is paramount to the success she has as an athlete, and the two reunited mid-2013. Which bring us nearly up to speed. Nearly.

As a previous World Champion (in past five years) Carfrae just has to validate her spot by finishing an Ironman in the season to qualify for Hawaii, which she did just three weeks after Kona with a second at Ironman Florida. However, since then, she has had a frustrating year trying to convert her training to success on race day due to some unfortunate luck. She crashed in San Juan in February, received a controversial red card in Oceanside for passing, and in Eagleman, her hips, glutes, hamstrings and back all locked up to the point that she couldn’t unclip from her pedals and had to get someone to help her off the bike! So while her training appeared to be going well, the points on the scoreboard were telling a different story. It wasn’t really until Ironman 70.3 Racine in late July that she started to look like the Carfrae we know with a second to the dominating Angela Naeth over the half iron-distance, and then a win at the Ironman 70.3 Muskoka event in early September with her devastating 1:18:09 half marathon split.

So while we haven’t seen Carfrae over the iron-distance for eleven months, and she hasn’t had the season she would have hoped for, you can bet that on this one day in October she will be one heck of a force, albeit a pocket rocket of a force, to reckon with. So with the combination of her fantastic and successful seven year relationship with Lindley, recently rekindled, combined with the 18 months that Carfrae spent learning a whole lot more about herself, only to bring that knowledge back to her coach, you can be dead certain that this combination will be lethal come race day.