Triathlon’s combination of three different sports creates dynamic races. Comparing to single sport endurance events such as marathon running, you have to account for the strengths and weaknesses in each of the legs. While you can be pretty sure that the winner of a marathon will be close to the front after 30k, things are more complicated for a triathlon. The T2 leader is in a great position to win the race, but stronger runners keep the race interesting for much longer, and often big events are decided very close to the finish line – just think back to Kona 2014 when Mirinda Carfrae was able to win the race even after being more than 15 minutes behind in T2.

There has been a lot of discussion about the “most important” leg in a triathlon. In addition to getting the balance right, it’s still interesting to ask if long-distance triathlon favors the stronger bike riders (that will still need to have a decent run) or if everything is decided on the run and the strong runners just have to make sure to not fall too far behind on run.

This post discusses this issue from a statistical view point. I have analyzed Pro race results from 2005 to 2016, looking at more than 500 male and female races with a decent number of results from almost 300 Ironman and Challenge events over the IM-distance. For each of these I have calculated the “relative importance” of each of the legs with a statistics package. The concept of relative importance describes where the race is decided – not necessarily where the most time is spent or where the largest differences occur, but which leg matters most for the final outcome.

Here are a few examples where one of the legs had a very large influence on the race results:

Another typical scenario is that there isn’t a dominating leg but that the bike and run have almost the same importance. Here’s an example from Kona:

The overall average numbers for the importance of each of the legs are:

Changes over the Years

While the leg contribution in a single race is often shaped by the participants, race tactics and dynamics, the average data by years shows a long term trend: 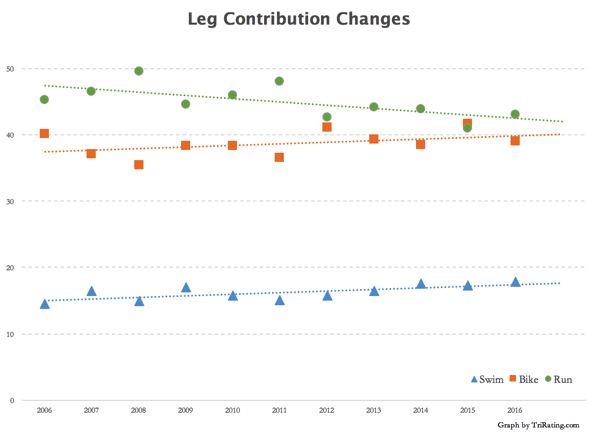 What’s the relevance of this data? Here’s my interpretation of it:

I think this interpretation is supported by the development of race times we’ve seen in the last few years: For a while male athletes struggled to balance the bike and run. In 2013 we’ve seen a number of 2:40 runs: Bart Aernouts (at IM France) and Victor Del Corral (at IM Florida) ran 2:37 marathons.In 2015 there were some crazy fast bike times, for example IM Texas saw two great bike splits with a 4:10 by Joe Skipper and a 4:11 by Lionel Sanders, but they only ran 3:04 and 3:11 and the race was won by Matt Hanson with a 2:45 run. In 2016 athletes were much better at getting the balance right: A world record by Jan Frodeno (7:35 at Roth with a 4:08 bike and 2:39 run) and the fastest time in an Ironman-branded race by Lionel Sanders (7:44 at Arizona with a 4:04 and 2:42).

Another question that is often asked is which courses favor certain types of athletes.

As noted above, the swim has a relatively small contribution to the overall result, but there are still some noticeable differences between different courses: 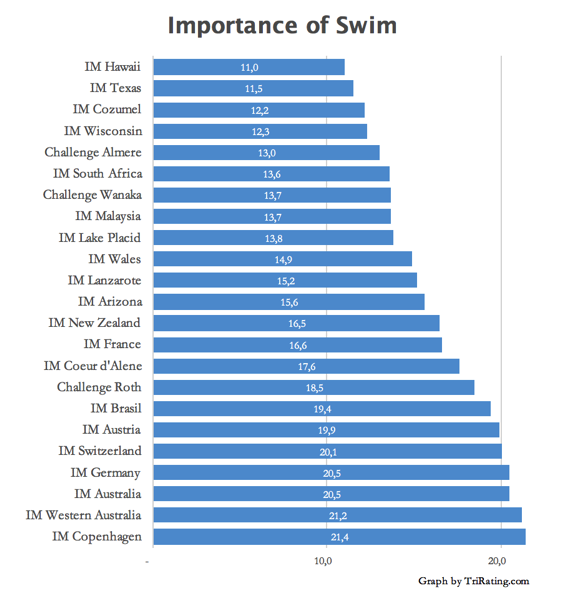 Kona is actually the course with the lowest average swim contribution. I think this is mainly caused by a relatively evenly matched field, and everyone tries to stay with the front group as long as possible, usually resulting in relatively large front groups coming out with very small differences. Compare that to IM Germany, IM Western Australia or IM Copenhagen, where often the swim leader manages to create a gap and then goes on to win the race. Think of Jan Frodeno in Germany 2015, Luke McKenzie at Western Australia 2015 or Camilla Pedersen at IM Copenhagen 2012.

Another question that is asked is which courses are good for the strong bike riders and which favor the faster runners. The following graph shows the average difference between the bike and run contribution for the courses with a decent amount of data: 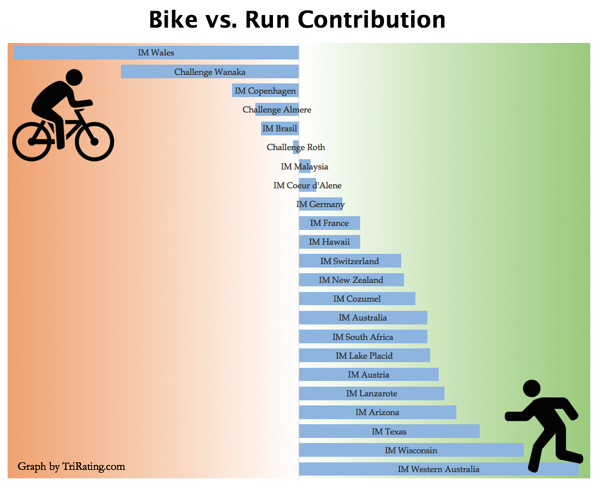 If the bar goes to the left and into the red, the bike leg has a higher contribution, if it goes to the right and into the green, then the run is more important. Also, the longer the bar the larger the difference is. IM Wales is the best course for the strong bike riders (with the bike leg contributing 20% more to the final result than the run), while Western Australia clearly favors the runners (run contribution 19% larger than the bike).

Analyzing the importance of the swim, bike and run in long distance Pro races shows a couple of interesting points:

While the analysis presented in this post is based on Pro data, the conclusions about the courses seem to be properties of the courses rather than the fields racing the course. Therefore, they should apply to agegroupers as well and can be used as a general guideline to decide which course might favor the strengths of a particular athlete.

But even with the differences between courses affecting the importance of the legs, triathlon is truly a sport of its own: You can only do well if you are great in each of the three legs. The interaction between the disciplines makes triathlon such an interesting sport to follow and to participate in.