The last few days I spent some time re-watching the IM Live Kona Coverage .. both to “run the numbers” and also to validate my initial impressions. I loved the Kona race and the coverage, but I also think that it could be so much better – both for hard-core fans and casual observers of our sport.

It’s important to me to start by saying that in my opinion the commentators Michael Lovato, Matt Lieto and Greg Welch did a decent job. While they are the “public faces” (or voices) of the coverage and usually the first target for criticism, they have to work within constraints that they can’t easily influence themselves. Of course there is room for improvement (some suggestions below), but I’ll take “not 100% politically correct” banter between Mike and Matt over “corporate PR-speak by trained communication people” any day.

One of the most often (and loudest!) voiced complaints is that the coverage is too much focused on the male race. When re-watching I made notes at each full minute about what was shown, beginning with the men’s start all the way to the end of the commentary after the women’s top finishers were in (almost 10 hours of coverage). Here is the breakdown between the categories: 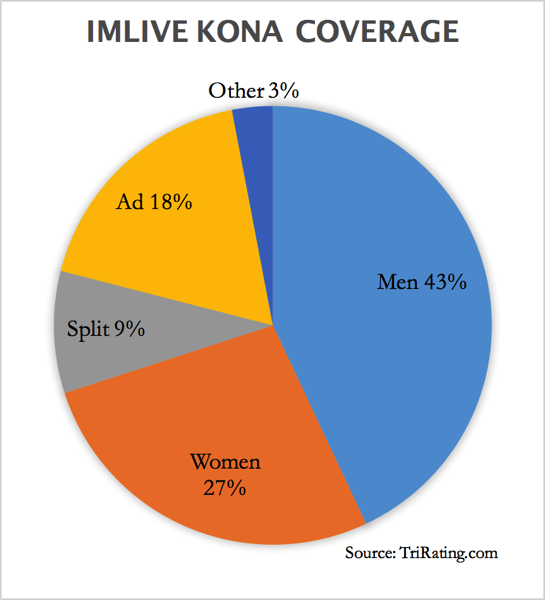 This shows clearly that the men have received more attention during the race – they received an extra one and a half hours of screen time. A few other observations about this data:

It would be interesting to see if improvements have been made in the last few years, but to me and a lot of others the difference in the coverage between the male and female races should be much smaller. Here are some other things that I noticed:

Another ideas for improving the coverage of the female race would be to have a commentator focused on the women’s race (ideally a female). For the last two years they included top female Pros not racing (Linsey Corbin last year, Liz Blatchford this year), but mostly in the form of short interviews. (Sara Gross has a longer discussion about what she would like from the coverage of the women’s race.)

I may be a bit biased, but this year the data coverage of the Kona race took a large step backwards. At the start of the 2015 season Ironman announced improved coverage for their big races, including a new website and GPS coverage of the races. For example, last year there was a constantly updated GPS Leaderboard that showed at any time where all the Pros in the race were and how large the time gaps between all the athletes were. This year there was only a semi-secret website with “dots on a map”, but no leaderboard with time differences – all the splits in the live blog or on the IM Live coverage were from timing mats or from the spotter network – clearly not good enough for this time and age!

As the Pros are already carrying GPS Trackers and the base data is already collected, I can’t understand why there isn’t a bigger focus on providing a GPS Leaderboard and the advantages coming with it:

The lack of a GPS Leaderboard was especially frustrating since it was available last year. Hopefully Ironman can bring it back for next year’s coverage!

Other Ideas for Improving the Coverage

Here are a few other ideas on how the coverage could be improved:

I’m not an experienced “media person”, so I’m not sure how much of this is possible, but I think that most of these suggestions do not necessarily require major changes or spending a ton of money. I’d love to see improved coverage for next year’s Kona race!