This year’s IM Frankfurt produced a number of DNFs due to hypothermia when there was a non-wetsuit swim for the Pros because of high water temperatures. This post goes into some more detail on what happened, my best understanding of the current rules and some suggestions for avoiding more occurrences of this issue. I hope that this post can add some details to the discussion that needs to happen.

In the days before Ironman Frankfurt there was a lot of speculation if the Pro swim would be without wetsuits. The cutoff temperature for the Pro race is 21.9°C (71.5°F). As the temperature was hovering around this mark, the final decision would be made on race day morning. I was out at the “Langener Waldsee” on Wednesday when the posted water temperature was 21.8°C. After a few nice warm days it was already at 22.1°C on Friday and on Saturday it had risen to 22.5°C. But Saturday was cloudy and had some rain, so it was a surprise that on Sunday morning the official temperature was announced as 22.6°C (even higher than Saturday) and the race was to start with a non-wetsuit swim.

Among local athletes who swim in the Langener Waldsee on a regular basis it is well known that there are warmer and colder spots in the lake and that temperatures can vary quite widely depending on where you measure. According to the rules the water temperature is to be taken “at the middle of the course and in two other areas on the swim course, at a depth of 60 cm. The lowest measured temperature will be considered as the official water temperature.”

According to ITU rules, the air temperature also plays a role. While I am not aware of any official measurements, air temperature was somewhere around 12°C before the race started and 14°C at the time that athletes started the bike.

There are some reports that the life guards at the Langener Waldsee measured a temperature of 21.5°C on Sunday. After a cold and rainy race day the temperature dropped pretty quickly, on Monday it was posted at 21.0°C and 20.3°C on Tuesday.

After the decision to not allow the use of wetsuits for the Pros, a lot of Pro athletes were struggling in the swim. The most public case was Daniela Ryf who was leading the women’s race after the swim but couldn’t get warm and had to abandon the race after an hour on the bike because of hypothermia.

There were a lot more athletes that struggled with the cold and DNF’d on the bike. Some athletes even had to be rescued on the swim, close to becoming completely disoriented and loosing consciousness. At least two athletes were sent to the hospital when their low body temperatures raised serious concerns with the lifeguards. 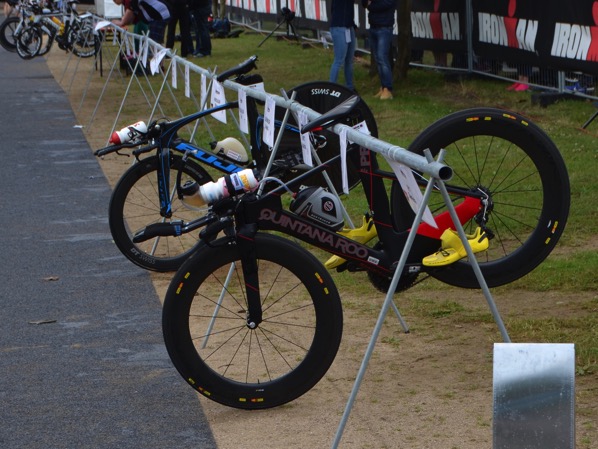 (Photo: The lonely bikes of Kristin Möller and Diana Riesler in T1 after both had to be rescued during the swim.)

Brett Sutton has written about the issue as well and included a list of athletes that DNF’d because of the cold – making it clear that both men and women struggled in the water. An even larger number of athlete’s races were affected, here’s a short excerpt from Caroline Livesey’s race report (she went on to finish 12th in the female Pro race) about the end of her swim:

Determination kept me going but coming into T1 I knew I was in a bad way. I couldn’t really think straight so I just went onto auto pilot and transitioned onto the bike leg. I am pretty sure if anyone medically trained had stopped and checked me over I would have been delirious and probably have been pulled from the race. Apparently spectators were wondering out loud how on earth I was going to run a marathon when I could barely run in T1.

It is obvious from the number of athletes struggling that this is not a gender-specific issue and that the official water temperature was not an accurate reflection of conditions on race morning. Racing without a wetsuit should avoid overheating on the swim, but the dangers of hypothermia were clearly much bigger for the Pro athletes in Frankfurt.

Before offering some ideas on how to avoid a situation as in Frankfurt, it’s a good idea to review the rules as they stand.

(a) For professional athletes, wetsuits may be worn in water temperatures up to and including 21.9 degrees C/71.5 degrees F;

The cutoff temperature was reduced from 76.1 degrees Fahrenheit (24.5 degrees C) in 2014 to align more closely with changes in the ITU rules. These are as follows (Section 4.2 Wetsuit Use):

In addition the ITU rules have a section (Section 4.3 Modifications) on shortening or cancelling the swim in certain conditions:

Air temperatures also play a role on how big the danger of hypothermia is – in cold temperatures athletes will be shivering in the final minutes before the race start, and it becomes much harder to dry and get warm once on the bike. Therefore Section 4.3 also contains a table that shows how to decrease the measured water temperature to account for low air temperatures:

However, this table only applies for water temperatures below 22°C and – at least the way I understand the wording of the rules – is only to be used in determining to shorten or cancel the swim, but not for the decision to allow a wetsuit or not.

In order to to deal with special conditions not covered by the previous rules there is a catch-all rule (also in Section 4.3) that gives extra powers to the referees:

b.) If other weather conditions dictate, i.e., high winds, heavy rain, changing temperature, current, etc. the Technical and Medical Delegates may adapt limits of the swim length or adopt provisions about the use of wetsuit.

However,  I’m not aware of a similar provision in the Ironman rules and it was not invoked on race morning of IM Frankfurt.

To sum up, if the measured water temperature of 22.6°C is deemed correct, then the current rules directly imply a non-wetsuit swim.

If the current rules in place put athletes in danger as has happened in Frankfurt, obviously they need to be changed to avoid similar occurrences.

Ironman has much bigger experience in organizing long-distance triathlons than the ITU that is primarily concerned with racing on the Olympic Distance. The ITU rules make a distinction between Olympic Distance swims (1.5k) and those longer, but of course there is a large difference between racing a 70.3 swim (1.9k) and an Ironman swim (3.8k), and the use of wetsuits in Professional long-distance races seems to be an issue that both organizations should discuss and maybe adjust their rulebooks.

Rather than simply adjusting the cutoff temperature as discussed in the previous section, my suggestion is to extend the water temperature adjustment procedures and base all decisions off that modified temperature. In order to be used for these cases the table needs to be extended for warmer water temperatures, at least up to 25°C or even higher to make the table applicable for agegroup racing as well. (To my engineering mind, there’s also no clear description on which row/column to use, for example does a temperature of 22.6°C correspond to the row of 22°C or should it be rounded up and then correspond to the 23°C row.) This would still not address situations with large differences between warm water and cold air temperatures (for example 25°C water and 8°C air temperature), so Ironman rules should allow referees to make a call on race day.

Discuss with the ITU, Federations and Ironman

Of course change is not going to happen on its own, so Pro athletes, coaches etc. have to make  the ITU, their local federations and Ironman aware of this issue and encourage them to better address it in the rules. While I have suggested a possible solution above, there may be other (and better) ways of updating the rules. An open discussion about the changes would surely be appreciated by many athletes, especially those that barely escaped without lasting damage from racing an Ironman.