On her blog, Heather Wurtele wrote that she was frustrated about her swim time in Kona:

In 2010 I swam a 51 min IM swim in St. George, beating Meredith Kessler out of the water. I also used to be in front of Caitlin Snow out of the water, pretty much guaranteed  These two ladies now soundly kick my ass. … Their improvement highlights my stagnation.

Here’s the data that Heather’s statement is based on:

(I put Meredith’s Hawaii time in brackets as she didn’t finish this year after a bike crash.)

Heather’s coach, Paulo Souza, replied with an analysis of the Kona swim times:

He comes to the following conclusion:

I think the data shows your clear progression in the last couple years.

As I have started to analyze swim/bike/run times (in addition to the total finishing times), this discussion inspired me do have a closer look at the data. First, here’s a look at the swim times where Heather was racing with one of the ladies mentioned:

(The table is just a comparison with Heather’s results; of course, the other athletes have more results than these.)

From this table, it looks that the only time Heather was swimming faster than Meredith and Caitlin was St. George 2010, and she was “soundly kicked in the ass” (her words) in this year’s Kona. But what should be considered “normal” .. was St. George the exception or Kona 2012? Another question is what influence the different courses have. Obviously the differences in the swim time largely stem from the fact that Kona (as an ocean swim with swell and currents) is slower that the lake swims in St.George, Canada or Arizona. Also, how accurately a course is measured is also an influence. 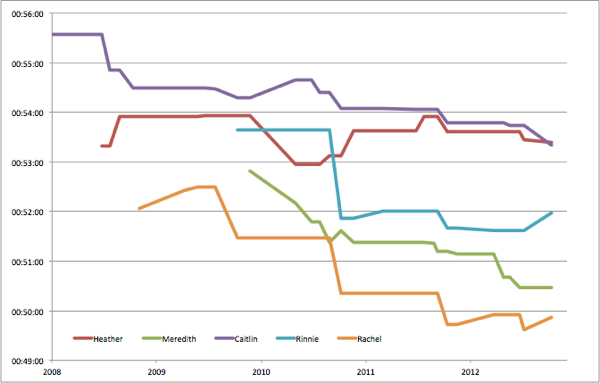 A couple of observations from this graph:

All in all, the data agrees more with Heather’s assessment that her swim hasn’t improved, while other athletes managed to get better. Of course, the data is purely looking at the times – other factors such as how much effort was required cannot play a role here. If Paulo’s observation about her improved pool times is correct, maybe Heather can swim a bit harder without sacrificing too much bike or run time, or we can look forward to a breakthrough performance from Heather in one of her future Ironman races. For the next months,I think she correctly predicted when she wrote: 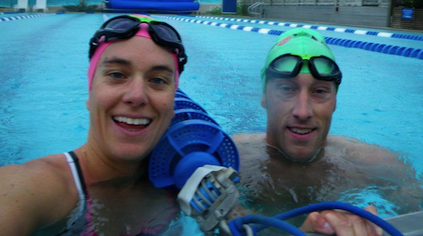 (Photo from her blog.)