Registering for an Ironman race as a Pro

In my post on the changes to the KPR system, I wrote:

There will be even more changes to the start lists in the last few days than we already have. (If there’s a strong field, withdraw; if there is a weak field, try to enter late.) Athletes can register for as many races as they want, and can enter or pull out just a few days before the race without any penalties.

This prompted a reply from Jordan Rapp that “tightening procedures” is part of the suggestions he and the other athletes made to WTC. He offered to explain what the registration process looks like and also put me in contact with Heather Fuhr and Paula Newby-Fraser who manage the registration process for WTC. They were kind enough to answer my questions and make sure that the information I present here is as accurate as possible. (Any remaining errors are completely my own fault.)

As usual, a picture is helpful to give a quick overview of the process and the people involved in the process: 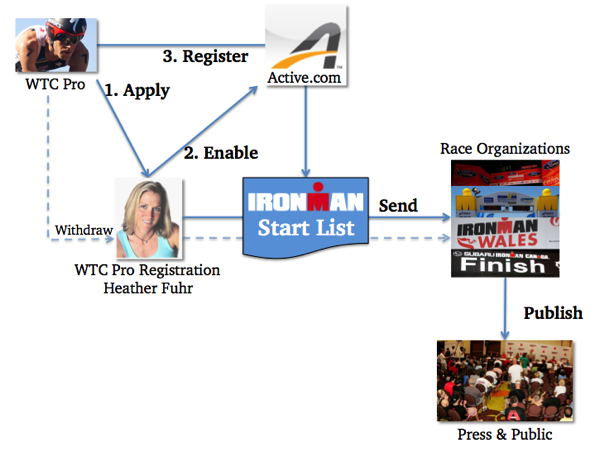 Before going into details, here is a short summary:

A detailed look at the Process

One caveat before I go into the details: This is the process how it typically works for North American Ironman-distance races. There are some variations for races that are organized by WTC licensees, and more changes for 70.3 and 5i50 races around the globe.

Any athlete who is recognized by their national association as a professional or elite athlete (standards vary from country to country) can contact WTC Pro Membership and ask to become a new WTC pro (or if they already have been a Pro, renew their membership). They have to pay the membership fee of 750$ (processed through active.com, some reduced fees for those who only want to do a single event).

Applying for a race

Once an athlete is a WTC Pro, he or she can apply to register for a race by sending an email to WTC Pro Registration. Apparently, athletes still try to contact the individual races directly, but that just delays the whole process as all applications have to be handled by Pro Registration.

Each race has a pro registration deadline (published at “Event Registration“), around two to four weeks before the race. (From what I heard, WTC is trying to establish a four week deadline for all races.) Also, there is an upper limit of pro slots that a race offers, but that limit is rarely reached for Ironman races. (Apparently, it has happened for late season races such as Florida or Arizona, but it’s more of a problem for popular 70.3s such as Honu.)

The application email from the WTC pro is usually handled by Heather Fuhr, WTC Pro Liaison (and 1997 Kona champion). She makes sure the formalities are observed (the athlete is a registered WTC Pro, applying before the deadline for a race with open slots) and that nothing “funny” is going on (for example, someone trying to apply for three different races on the same weekend).

If everything looks okay, Heather enables the pro for this race on active.com, and the athlete can go through the normal registration process. (Except for the prize being 0$, a pro registering is basically the same as for any age grouper – name, address, t-shirt size, medical info, etc.)

Close to the deadline, Heather makes sure all loose ends are tied up (for example athletes trying to register in the last few days or athletes that applied but never registered). The start list is then sent off to Athlete Services for the individual race. The race organization is then responsible for publishing the list on the race website, release it to the media etc.

If an athlete wants to withdraw, he/she can do so by sending an email to Pro Registration at any time. If the start list has already been sent, that information is then forwarded to the race organization. About two days before the race, a final list taking all last minute withdrawals into account is then sent to the organization that does the timing for the event and is also reflected on the Athlete Tracker.

Suggestions for Registration and Publishing

The way I see it, there are some issues where the process can be improved further:

Implementing #3 would remove my biggest frustration in writing posts before a race – how do I get a decent, standardized, up-to-date start list? From what I heard from Heather and Paula, WTC is already working on it:

“Going forward what we are looking to do is have a centralized location on the Pro Membership website where we can house pro start lists. These will be published [..] just after the registration deadline.”

Respecting the “event procedures” is part of the “WTC Code of Conduct” that each athlete accepts as part of the registration as a WTC pro.

Registering for a Race

If an athletes misses the deadline for a race registration, he/she can ask – given extenuating circumstances – for a late entry, but there’s no guarantee it will be granted. Jordan notes that “WTC has been remarkably accommodating”, but even so this means that my earlier statement (“athletes can enter just a few days before a race”) is not correct. Athletes might get lucky and be allowed a late entry, but it’s totally beyond their control.

Withdrawing from a Race

If an athlete withdraws very late or without a proper explanation, WTC can sanction the athlete, “including but not limited to” (I love these lawyerly terms!):

To date, no WTC pro has ever been sanctioned in this way.

I think the withdrawal process is still pretty loose: There is no expectation for the athlete other than notifying Pro Registration a few days before the race that he/she won’t start. Also, notifications from athletes that they won’t start are not always reflected in the released lists. (The most recent example I noticed: Clemente Alonso had withdrawn from Mont Tremblant, but was still on the start list and got some press mentions.)

As we’ve seen in the past, this leads to lots of changes to the start list in the last few days before the race. It is also very unfortunate for a race to print bib numbers or prepare signs for the transitions areas for athletes that won’t start.

Therefore, I propose a two weak deadline for withdrawals. This sends the clear message to athletes that “normal” withdrawals (by change of plans, longer-term injuries etc.) should be communicated to WTC at least two weeks before the race. At this point, Heather can improve the “four-week list” (after registration closes) by removing all those athletes that will definitely not start and also by adding late additions. This would also help to avoid unnecessary press, signage etc.

If the start list is published on ironman.com, it could be updated at the two-week-mark. Ideally it should be simple to figure out what changed to the initial list put out, e.g. by crossing out the athletes that have withdrawn, and adding a special “late entry” section.

Of course, you can’t force athletes to start an Ironman race, and there may always be things coming up shortly before the race that prevent an athlete from starting.  But it should be clear that these “late withdrawals” will be more closely watched by WTC, and a “personal discussion” with Paula about “professional conduct” would probably help to keep these to a minimum (even without official sanctions). (More process – such as a fee for a late withdrawal, limiting the number of late withdrawals per season or requiring a doctor’s notice – sound tough, but will probably not achieve any meaningful results: Either the requirements are easy to “fake”, or you’re punishing everyone for the transgressions of few.)

Registration Process and the KPR

In my discussion of the recent KPR changes I saw the danger of “more changes to the start lists in the last few days than we already have: If there’s a strong field, withdraw; if there is a weak field, try to enter late.” I’m glad that the registration process as outlined above should do a pretty good job of limiting last-minute additions.

As outlined above, I think the withdrawal part of the field still should be firmed up a bit more. While it’s great that WTC have been very accommodating, the changes in the KPR mandate that withdrawals later than two weeks before the race should be for “obvious reasons” only.

Jordan has a clear view on this:

To sum up, I hope that late registrations become an exception, and that repetitive “fishy” late withdrawals will be sanctioned.

I think that with just a few tweaks the WTC registration process will do a very good job of making sure that late entries and frequent late withdrawals can be limited to exceptions. WTC is rarely accused of being too accommodating, but the KPR changes require a tightening of the withdrawal guidelines and a stricter enforcement of the rules. This would also make it easier for WTC to make up-do-date start lists available to the public starting about four weeks before a race. All in all, this would be very welcome improvements to the current situation.