One of the questions I’m often asked is how the fields in a races compares to that of another race (or year) and which one was stronger. I have tried a few different approaches but couldn’t quite figure out how to account for “super stars” in a race and at the same time for the “depth” of the field or “how close” the race is going to be.

As there are no races this weekend I’ve taken another stab at this question. This time I have come up with a relatively simple system that nonetheless yields some good results. This post contains a description of the system, my analysis of the strength for the 2016 IM-distance races and a look forward to the 2017 races.

For each athlete in a race, I’m assigning a simple points value:

Based on this scheme, each athlete counts for either a full, a half or no points. (Because Ironman still keeps the female Kona Pro field smaller than the male field, this leads to lower scores for the female fields. I will adjust for this inequality when comparing each field against the typical Kona field in the next section.)

In addition, there are bonus points for having done well in Kona in the past:

For example, Frederik Van Lierde or Daniela Ryf count for two points in the 2016 races: One point because they have raced Kona 2015 (no “extra” points for having raced there in 2014 as well), and one bonus point as they have won Kona (regardless of how often or how long in the past).

Of course you could make this a lot more complicated by coming up with additional points and bonus points for other things, but for now I consider this simple system to be “good enough”.

The first observation is how much stronger Kona is compared to all the other races:

In order to account for the different points available for male and female fields, I calculate a “Kona Strength” for each male and female race by dividing their points by the “typical” Kona points (40 for the females and 55 for the males).

Based on this simple scaling, the strongest 2016 fields were:

This “scaling” also creates a meaningful interpretation of the strength  of a field: For IM Germany it means that roughly a third of the male Kona field was racing in Frankfurt, and about a quarter of the female Kona field in New Zealand.

Here’s a closer look at the strength for the 2016 long distance male fields: 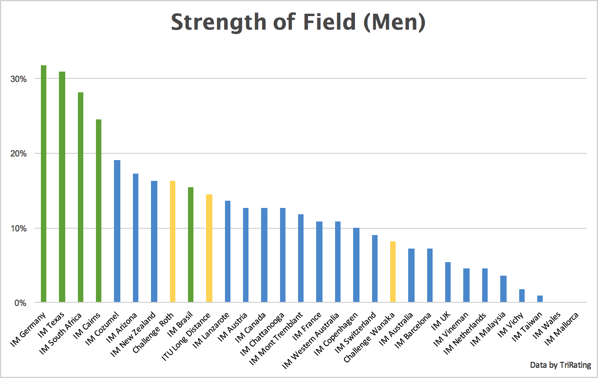 (Regular Ironman races are shown in blue, Regional Championships in green and Challenge races and the ITU long-distance championship in yellow.)

For the men the best fields are racing in the Regional Championships: IM Germany, IM Texas, IM South Africa and IM Cairns have had the four best 2016 fields (Kona strength between 32% and 25%). IM Brasil wasn’t quite on a similar level, but 15% Kona strength is still better than almost all other “regular” Ironman races.

Challenge Roth (16%) and the ITU Long Distance Champs (15%) also had strong fields while some of the smaller IMs weren’t able to generate much interest among Kona level athletes.

Here’s a closer look at the strength for the 2016 long distance female fields: 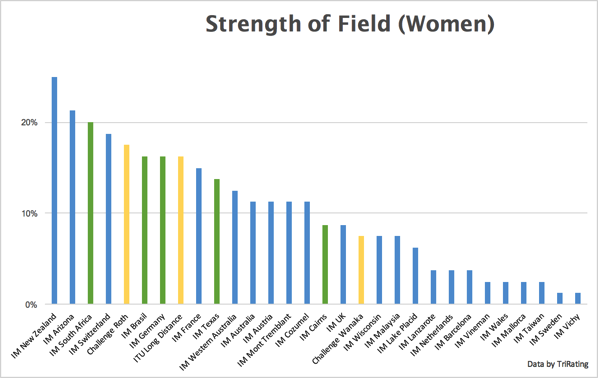 (As for the men, regular Ironman races are shown in blue, Regional Championships in green and Challenge races and the ITU long-distance championship in yellow.)

Interestingly, the strongest field of the year (of course outside of Kona) wasn’t in a Regional Championship but at IM New Zealand – lots of Kona racers started their season early in the year, and Mareen Hufe finished in 7th place with a time of 9:16 – a time usually good enough to win the race or at least finish on the podium. For more details on New Zealand, have a look at my results analysis.

Most of the Regional Championships were able to draw strong fields: South Africa, Brasil and Germany had a Kona strength between 20% and 16%, and only Cairns (with a relatively small field) fell off a bit with 9%. Challenge Roth had a female field comparable to the Ironman Regional Championships, their 2016 female field (18% Kona strength) was slightly stronger than the field in Frankfurt.

The first long-distance races of this year have already been raced, and while the fields at Challenge Wanaka had similar Kona strength as last year, IM New Zealand wasn’t quite able to hold on to their great field strength from last year: The female field was at 18% and the male field at 12%. It seems that the strong 2016 fields led to some athletes making different plans for this season.

With the start lists for the first 2017 races, we can calculate the Kona strength of the fields:

Of course the fields and the corresponding numbers are still preliminary (for example not all the athletes registered for both races will do Texas if South Africa isn’t a complete disaster, also the Texas list isn’t closed yet). But the South Africa number seems quite firm and if they end up anywhere close to where they are now, the fields would already be stronger than for any race in 2016. I can’t wait for the racing season to start!