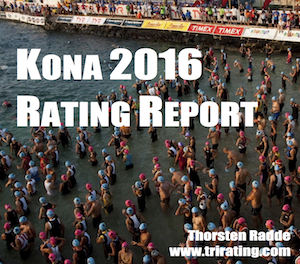 Here is my calculation of the KPR at the end of July, deciding 40 male and 28 female slots (in addition to the Automatic Qualifiers). My results are unofficial, the official results will be posted on the Ironman website at http://eu.ironman.com/triathlon/triathlon-rankings/points-system.aspx (but as far as I can tell shows the same data). I do not count AQs and athletes that haven’t validated my rankings, therefore it is a bit easier to determine the Top 40 male and Top 28 females. I will update this post with new information regarding declined slots and rolldown. For now, the athletes with a rank in brackets (e.g. “(42)”) are outside of the July slots. I will update this post with information about slot declines and rolldowns.

There is another cutoff in August, adding another 10 male and 7 female slots. Once the field has been completed, I will work on this year’s version of the Kona Rating Report, looking at the field and each athlete’s chances for a good result. The free report will be released in time before the Kona race, you can already pre-order your copy.

Update July 28th: The first rolldown has happened: Carrie Lester is now marked as a qualifier as well. It’s unclear who has declined her slot, I have marked the female qualifiers without a “Q” on the Ironman site with a question mark. (So even though Carrie is still ranked 29th in my table, she did get a slot.)   So far there is no indication for a rolldown on the men’s side.

Update July 29th: It is now clear that the slot that rolled down to Carrie was declined by Michelle Bremer. I’ve added a “D” to her name and adjusted the other ranks accordingly.

Update August 2nd: All male slots have been sorted. One slot rolled down to Jens Petersen-Bach, as far as I can tell Matt  Trautmann had to decline his slot. All other slots have been accepted.

Update August 3rd: Just when everything seemed clear, Beth Gerdes declined her slot (details on her blog), and another slot rolled down to Dimity-Lee Duke.