One of the ongoing issues in Ironman racing is the disparity between Pro men and Pro women slots in Kona (50 for men, 35 for women). The main argument for the different number of slots is that there are a lot more men than women racing. Roughly, there is a relation of 2 men to 1 women that has been pretty much unchanged in recent years.

However, women’s races are often more exciting than the men’s race. In one of my older posts on this issue I’ve presented data indicating that the racing at the front of the women’s race is probably even closer than on the men’s side. Arguments for that include the number of lead changes on the run, or the time difference among athletes on the podium.

However, the decision by WTC not to increase the number of women’s Kona slots seems to be based on the perception that men’s field is „deeper“ than the women’s field. This post has a look at this claim and tries to provide data.

Suggestions for Measuring Depth Of Field

There have been a few „proofs“ that the men’s field is deeper than women’s. However, they don’t hold up to closer scrutiny.

I’ve heard Kona 2014 mentioned as anecdotal evidence that the women’s field was lacking strength. The observation was that by the time the field reached Kawaihae, 30 men were still in the race. At the same point in the women’s race, there were only ten contenders left.

Of course, using an arbitrary point in a single race is neither convincing nor statistically significant. There are tons of counterexamples, take for example Kona 2014 (the same race) about 30k into the run. At that time, the men’s race was practically decided with Sebastian Kienle 10 minutes ahead of the rest of the field, while there were at least three women with a chance to win the race (Daniela Ryf, Rachel Joyce and Mirinda Carfrae).

Another argument that is used very often is the number of KPR points at #50. Here’s the data from 2014 (not using Automatic Qualifiers):

While Bree has a lot more points than Jeremy, I don’t think that this shows that the men’s field is less deep than the women’s field – it just shows that #35 is interesting for the women and not for the men.

As an example of many similar lines of argument, Andrew Starykowicz has posted a detailed look at the time differences between the TopX in men’s and women’s fields. His data shows that the men’s races are much „tighter“ than the women’s races: 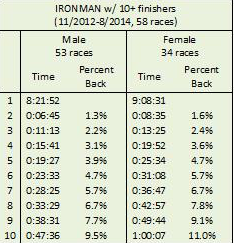 Each season, there is at least won Pro race that has a very small women’s Pro field. In 2013 IM France had only five starters, in 2014 IM Wales had only two. Of course it’s always bad if prize money goes unclaimed (France paid 8 deep, Wales 6 deep), but I think that this is again a consequence of the lower number of women racing: There are too many races for the smaller women’s field. I have suggested in my post on the Registration Procedures that WTC should keep Pros informed about the number of athletes that have already suggested for a race so that these very low numbers can be avoided.

It’s actually surprisingly hard to come up with a measurement for the depth of the field, considering the different field sizes and different finishing times. A way that I suggest are Relative Finish Distribution Charts („REFIDCHs“). A Relative Finish Distribution Chart shows the percentage of finishers for different percentages of the winner’s time. Here’s the chart for the men’s Kona finishers from 2011 to 2014 (the years that the KPR has been used to determine the fields): 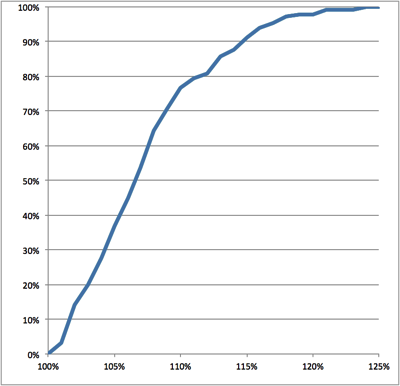 On the horizontal axis we see the relative finishing time (for example 105% means that the time equivalent to 105% of the winners time in a given year). On the vertical axis the chart shows the part of the field that has finished faster than the time on the x-asis. (For example, roughly 35% of the athletes finished within 105% of the winner’s time.)

REFIDCHs can be used to visualize the depth of the field. A „deep“ field will finish pretty close to the winner, resulting in a very steep graph. A „less deep“ field will have a flatter curve, showing that more athletes have finished further away from the winner. So if the women in Kona were less competitive, they would have a flatter curve, one that would be to the right of the men’s graph.

So let’s add the women’s distribution: 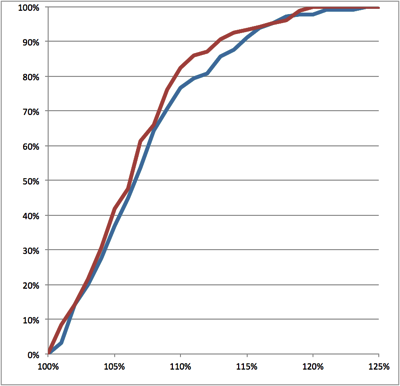 The two graphs have a very similar shape – if there is a difference, the women’s graph is to the left of the men’s graph, indicating a slightly deeper women’s field.

Let’s control for the influence of the different field sizes. One could argue that the smaller women’s field cuts away the slower end of the field. (Anecdotally, this isn’t the case: Some women that missed Kona this year included athletes such as Amy Marsh, Angela Naeth, Rebekah Keat, Laura Bennett or Eimear Mullan that could have placed well in Kona.) This is pretty hard to factor into the data, so I’ve done the next best thing by removing the men’s qualifiers in #35 to #50 from the results. (For 2014, this would have affected such well-placed finishers as 2nd Ben Hoffman, 6th Nils Frommhold or 10th Romain Guillaume.) Adding in a third graph for the „reduced Men’s field“ produces the following chart: 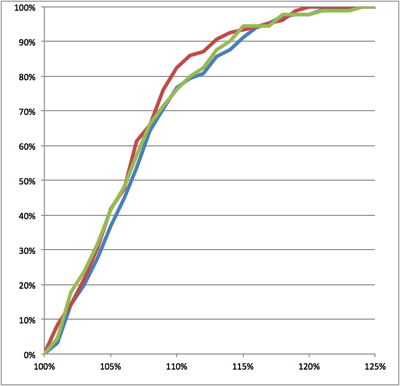 While reducing the men’s field has led to a steeper graph (indicating that more athletes would have been cut from the „slower“ end of the field), the graphs are still very close together, crossing each other at various points. Using this chart, there is no indication that the women’s field is any less competitive or deep than the men’s field or even the reduced men’s field.

I couldn’t find any data that supports the claim that the depth of the women’s field is any worse than the men’s field. (If you have other suggestions, please let me know!) While the lower number of athletes leads to bigger gaps in the Ironman races across the globe, at least the women that made it to Kona are as competitive as their male counterparts. In my eyes, the women’s race in Kona would be even more exciting than it already is if there were 50 Pro slots for the women.

7 Responses to Women’s Field as Deep as Men’s?