Copenhagen 2018 was one of the fastest editions on this course, the adjustment of 26:11 was quite a bit faster than the new course rating of 20:51. Especially the bike was quick this year, Kristian Hoegenhaug was just over a minute outside the bike course record by Andi Raelert from 2016. The deep field made for interesting racing, even if we didn’t see any new course records.

Boris Stein, Cyril Viennot and Giulio Molinari have secured their Kona slots. Nick Baldwin has to wait for the Mont Tremblant results, Tim Don has dropped out of the Top 10 August ranks. For details on qualifying, have a look at my updated post on “Kona 2018 Pro Qualifying”. 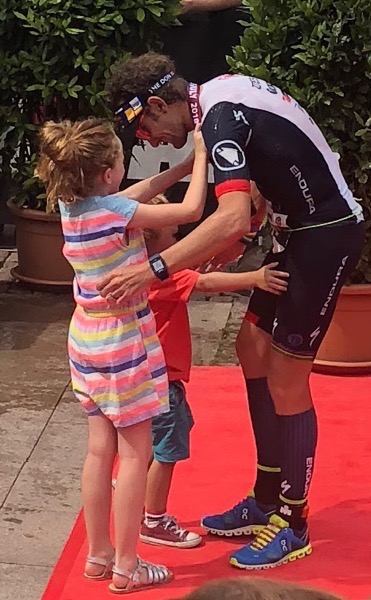 Anyone who has ever reached a difficult goal such as finishing an Ironman knows that crossing the finish line can be quite intense, often with a number of conflicting feelings. Tim Don wasn’t an exception when finished Ironman Hamburg in late July, and he was very emotional when he received his finisher medal from his two children (see photo on the right).

The end of an Ironman is always a relief – especially when hot summer weather leads to a canceled swim and you have to come up with a new race plan from scratch as the swim is replaced with an initial 6k run.

Tim’s finish in Hamburg was even more special as he had to fight his way from a career-threatening injury back to an Ironman finish: Just two days before Ironman Hawaii in October 2017, he was hit by a car during his final shake-down ride and broke his neck. The best option for a full recovery was wearing a halo for three months, even if that was probably the most uncomfortable choice. The story of his recovery from that injury is detailed in the documentary “The Man with the Halo” (available on YouTube). Being able to finish an Ironman just nine months after his horrible accident is a fantastic result.

But Tim is also a professional athlete, and it was clear that “just finishing” wasn’t his main goal: Hamburg wasn’t supposed to be the end of his recovery story but just a stepping stone on the way back to the World Championships. After he was able to win 70.3 Costa Rice in June, he had a chance to qualify for Kona. A fourth place finish would have secured a slot, and he was among the first four athletes for most of the day. But then he struggled in the last 20k of the run, eventually falling back to ninth place. Therefore, the elation of having finished was mixed with the disappointment of not having qualified for Kona.

After beating up his body and mind all day chasing an Ironman finish and a Kona slot, the last thing an athlete wants to think about how soon he can do the next one – but that’s exactly what Tim needed to do if he still wanted to race in Kona this year.

But I’ve seen a few athletes change their mind quickly once the initial disappointment and exhaustion have worn off. One example this year is Will Clarke who DNF’d while chasing a Kona slot in his home Ironman UK on July 15th. After weighing his options for a couple of days he decided to race IM Hamburg, the same race Tim did. Will was able to finish fourth with a solid day and secure his Kona slot.

Just one day after the race in Hamburg, Tim resolved to give qualifying one more chance. As he already had two good 70.3 scores, that required him to do another full Ironman race. He and his family had planned to stay for some time in the UK after Hamburg, so he decided to go for the last European Ironman race before the final Kona cutoff – Ironman Copenhagen on August 19th.

With only ten male slots available, it’s a bit hard to calculate what Tim will need to qualify. He’s currently in seventh position of those looking for an August slot, but a good number of athletes will likely pass him on the last weekend of racing. I think he’ll be safe for a Kona slot with a seventh-place finish (or better), but there are still many moving parts.

I hope that Tim’s body allows him to have a solid race in Copenhagen, without a doubt he’ll then finish in a position to receive a slot. It would be awesome to see him compete in Kona just one year after breaking his neck on the Queen K.

IM Copenhagen is one of the final races before the August cutoff for Kona Pro Qualifying. I have analyzed the situation for August Pro qualifying – who is currently in, who can still make it?

Here are the links to the full result analysis from 2017 (WPRO) and from 2016 which was the last men’s Pro race.

The Course Rating for IM Copenhagen is 20:11.

The strength of the field is 20% of a typical Kona field.

There are quite a few athletes who have already secured their Kona slots and are unlikely to race (e.g. Philipp Koutny, Marc Duelsen, Thiago Vinhal). Cameron Wurf and Jens Petersen-Bach are also safe but it’s unclear if they want to race another Ironman before Kona.