Update July 2nd: Updated the marathon times (the originally posted times were a bit slow, in all likelihood they included T2). Also added descriptions on how the race developed for the main athletes.

The heat made the conditions on Frankfurt very tough this year. It was a non-wetsuit swim, a slightly longer-than-normal bike (185k as the bike course had to be re-routed again) and then a very slow run. All-in-all this year’s race was 16 minutes slower than last year and about 25 minutes slower than the faster years in Frankfurt.

The “Big Three” German athletes validated their Automatic Qualifier slots at their “home” Ironman. Jan Frodeno and Sebastian Kienle also finished at the front of the race, while Patrick Lange had a less than stellar day (flat and stomach issues) to finish in 11th place.

As a Regional Championship, Frankfurt was offering a total of 6 Kona slots. Because of the much larger men’s field, there were 4 slots for the men and 2 slots for the women. These slots were claimed by:

and on the female side by

As was pretty much expected before the race, Jan Frodeno stepped on the gas as soon as the gun went off. Only Dylan McNeice was able to follow him on the swim, both were able to build a gap of almost two minutes to the big first chase group. On the bike he continued to keep the pace up, even overcooking a turn when he was a bit too fast going in, a motorbike blocked his first way out so he had to bunny-hop a traffic island and had to go off-road for a short bit – creating a moment of excitement but luckily no lasting impact on the race. Towards the end of the bike Sebi was able to bridge up to him, but they started the run more than ten minutes clear of the rest of the field. Once again Jan proved to be the strongest runner in the field with a 2:43 marathon in the Frankfurt heat. He defended last year’s title in style and continues to be undefeated in any race he started since Kona 2017. 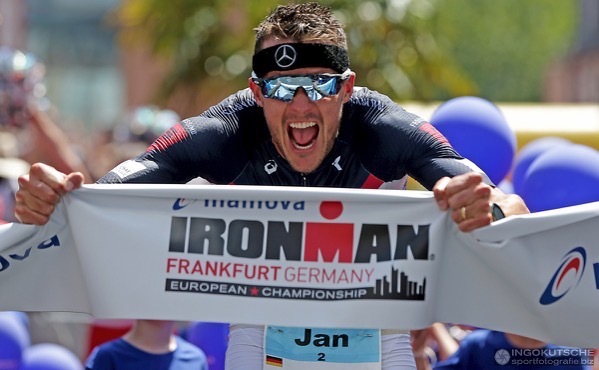 Second place went to Sebastian Kienle who also had a great race. His day started well when he was able to hold on to the first swim group – he just lost 2:10 to Frodo and was just 16 seconds behind Patrick. A similar swim in Kona would seriously change the race dynamics for him. But things didn’t proceed quite as smoothly for him: He stepped into a shard of glass that got stuck in his right heel. At the end of T1 he briefly stopped to try to remove it, but he was unsuccessful before starting the bike: 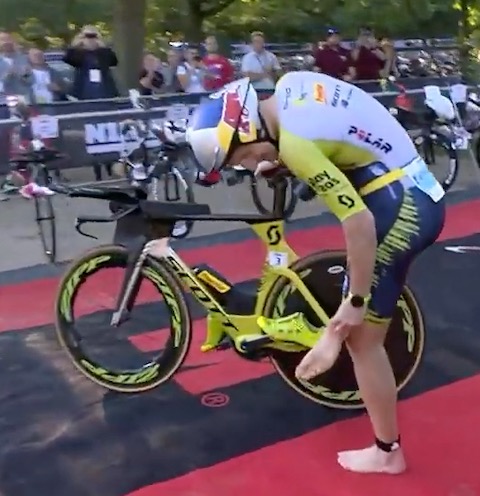 Once on the bike, the shard did not impact Sebi’s bike and he was able to quickly move through the group and put time into everyone else except Frodo. At the end of the first of two bike loops, he was still two minutes behind Frodo, but was four minutes ahead of the next chasers and six minutes ahead of the big group that included Patrick Lange and most of the athletes looking for a Kona slot. In the second bike loop his rear wheel lost some air but riding gingerly around the corners he was able to continue and even close the gap to Frodo when they got back to Frankfurt.

Sebi had alerted his time to the issue with his heel (word was “a cut in the heel” and he was bleeding quite a bit), so medical support was standing by when he and Frodo got into T2. He said that running through T2 was very painful and he wouldn’t have been able to run the marathon. But the medical team dug out the shard, shown on the live coverage in all the gory details. Once the shard was out and the cut closed with closure strips (basically sterile duck tape), he was able to run and the adrenaline kept him from feeling much on the marathon. (The day after was apparently a different story.) Before running out of T2, Frodo checked on him to make sure he’d be okay and started the run 30 seconds ahead of Sebi. Once Sebi started to find his rhythm on the run, he was able to close the gap and they were running side by side for a bit. But soon Frodo started to feel better and moved away from Sebi again after the half-marathon mark. Sebi was skeptical before the race because his Achilles issues kept him from running most of the winter, but he ran a pretty even 2:47 marathon and took second place.

Third place went to Franz Loeschke. He was riding with the big bike group and started the run in ninth place after taking a few extra seconds to stretch out his back with his black roll. The third best overall marathon was by far the fastest of “the rest of the field”, and he was able to enjoy the celebration on the Römerberg before claiming the final podium spot and a Kona slot. 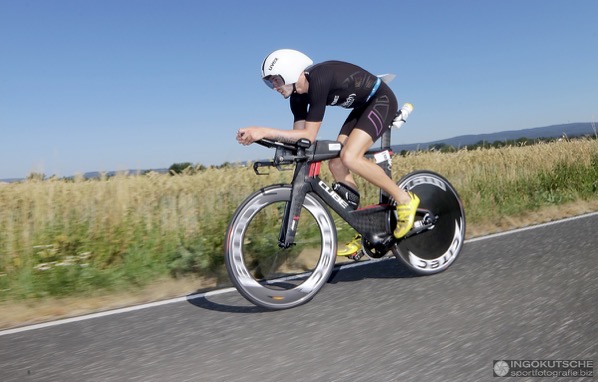 Kona champion Patrick Lange didn’t have a good day. He lost a good amount of time on the first loop of the bike, then had a flat at the start of the second loop that he had to fix right at the point where the most spectators (and photographers) were following the race. After that he wasn’t able to get back into the race, but he still finished to validate his Kona slot, apparently also struggling with stomach issues.

The female race also saw the expected T1 leader when Sarah True had the best swim. But she still had two athletes right behind her: The Iron-rookies Imogen Simmonds and Amelia Watkinson were able to hold on to her feet. After T1 it was Imo who took the lead, quickly building a gap that was pretty stable for most of the bike. She received a lot of TV time and was enjoying to be in front even without knowing what to expect on the run. 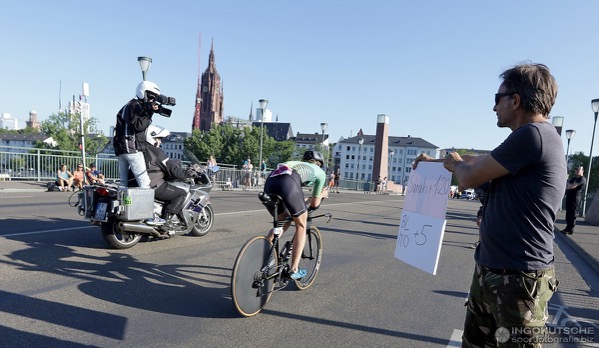 In the last hour of the bike ride things were getting close: Daniela Bleymehl had moved into second place and was making up time to the front. However, Sarah True was able to ride with Dani when she was overtaken by her, and Skye Moench was also able to hold on to that little group. After posting the fastest bike split, Skye was the first into T2, but Sarah and Imo were just seconds back and Daniela also in view of the others. On a good day, Dani should have been able to create a lead on the bike, and she soon retired on the run, citing a stomach bug she had been dealing with in the last days before the race.

The fastest runner was Sarah True – she was able to quickly build a solid lead running roughly a 3-hour marathon pace. The race seemed to have settled down at 35k with Sarah more than seven minutes ahead of Skye who was also seven minutes ahead of Imo in third. But then Sarah started to struggle with the heat and unable to deal with dehydration and low blood sugar. After a few k of jogging, stopping and walking that were painful to watch, she collapsed just 800 meters before the finish line at the last aid station and was carried off the course by medical personnel – almost fighting them because her mind was only focused on reaching the finish line.

When Skye passed the aid station she was unaware of what had happened, and the lead biker had to fill her in on why he was now riding with her. Just a few minutes later, Skye Moench won her first Ironman race – with the fastest bike and also the fastest marathon of the day in the female Pro race. 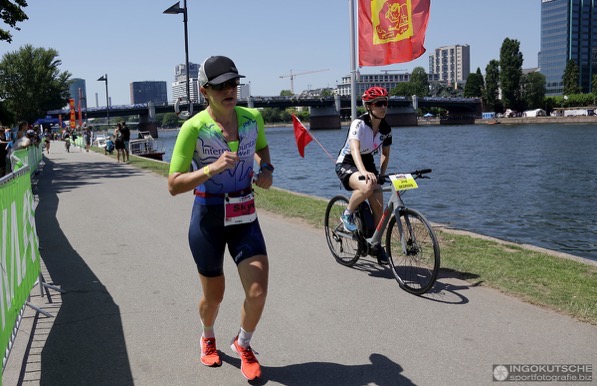 Second place went to Iron-rookie Imogen Simmonds. Jen Annett was surprised when the third-place bike rider joined her for the last k of the run, she took third but just missed out a Kona slot – disappointed with her bike but happy to have run a solid marathon even in the relentless  Frankfurt heat that continued to build as the day progressed. 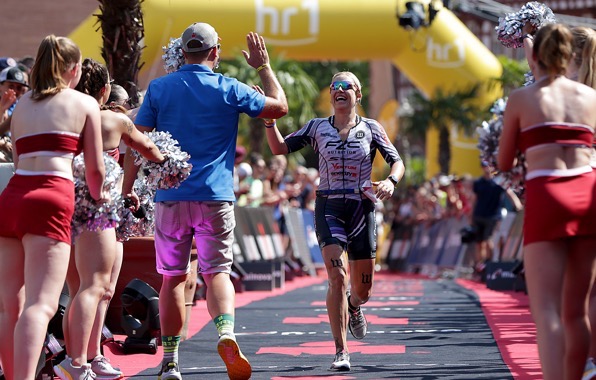 After receiving medical attention, Sarah True quickly bounced back and was able to tell the press later in the day of what happened to her. She also attended the awards ceremony the day after and received a long standing ovation for pushing so hard on race day.