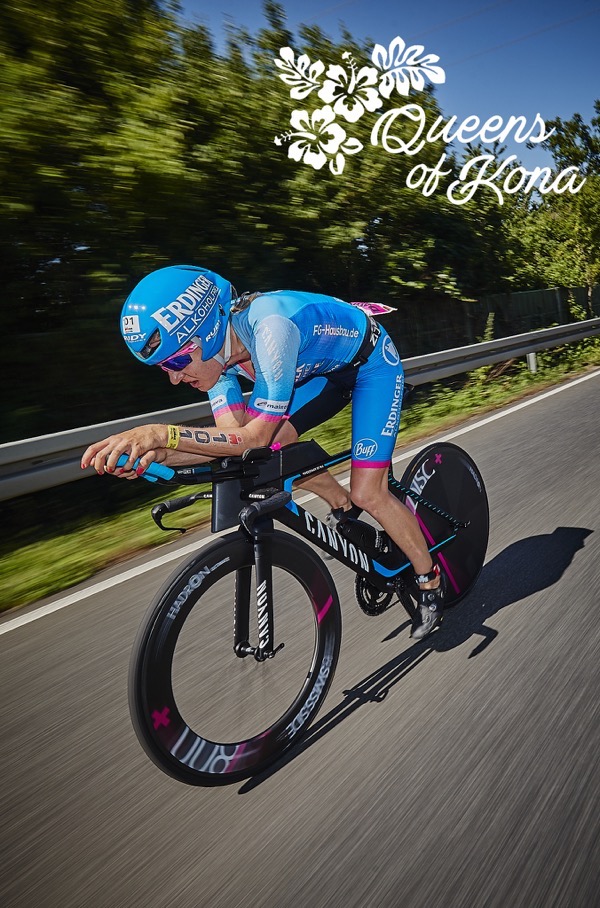 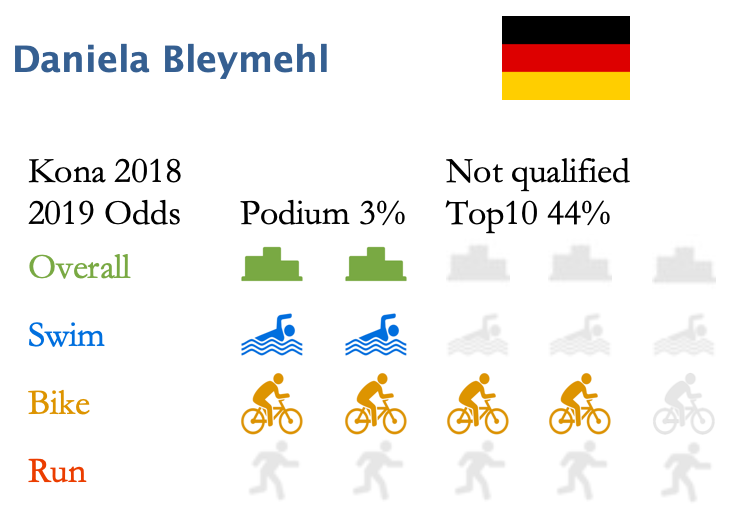 Daniela has had two great last seasons with wins in Hamburg, Roth and Italy. Her close win over Lucy Charles at Challenge Roth 2018 was at that time the fastest German time, it has since been further improved by Laura Philipp in Barcelona and by Anne Haug in Copenhagen. This year Danni had another string of wins in the half-distance, but 2019 didn’t go quite as well on the full distance: Her A-race in her hometown of Frankfurt ended in a DNF with a stomach bug she caught in race week. But she quickly recovered: Just one week later she improved her PR at Challenge Roth, even if she finished behind Lucy Charles and Sarah Crowley. Her most recent race was a win at 70.3 Zell am See.

Danni will lose some time in the swim, she was eight and nine minutes behind Lucy in Roth in the last two years. But just as in Frankfurt, there will be a couple of other strong bikers around her, and they are likely going to move through the field. Will she have the punch in her legs to shake the others, or will she – like in Frankfurt – drag a few others with her? It’s clear that she will be working hard to put time into those that are likely going to run faster than her. If she can run a marathon around 3:05, there won’t be many in Kona that can put more than a few minutes into her, and a Top 10 is definitely doable for Danni.

Thorsten: You’ve raced in Kona before, but you don’t have good memories from the race in 2016?

Daniela: My first Hawaii experience was pretty bad, at least concerning the race. On the marathon I’ve had strong pain in the abdomen and had to walk most of the course. It got even worse after finishing and I had to go to the hospital, suspecting an appendicitis.
But I also have some really nice memories of my time in Hawaii and approach this year’s race with a positive mindset. I’m really looking forward to my second trip to triathlon paradise!

T: What’s your view on your 2019 season so far? You’ve quickly erased your DNF in Frankfurt …

D: I’m okay with how the season has gone so far. Of course I’ve had some other ideas for my planned highlight at the Mainova Ironman Frankfurt, but third place at Challenge Roth just one week later was a nice consolation. In addition I was able to win three middle-distance races and two more podiums. I also noticed in my training that I have some untapped potential in all areas for the second half of the season.

D: A Top 10 finish is my minimum target. But if I can achieve that or whether I can finish even further ahead, doesn’t depend only on my own shape but also on the race dynamics. A World Championship can develop in a lot of different ways.

T: Have you already decided on your strategy for the bike leg? Are there “joint plans” with other athletes that have similar strengths?

D: I’ve never set up arrangements with other athletes and don’t plan to do so. However, there are probably going to be “dynamic alliances” that form during the race between athletes with similar goals. As a strong biker that is the card I want to play, but the efforts and benefits have fit. The big challenge will be to make the right decisions in the heat of the moment.

D: This year in Roth I wasn’t quite able to perform at the level I’m showing in my training on a regular basis. I’m not sure if that was because of the infection and the race in Frankfurt. But if I want to finish close to the front in Hawaii, it’ll require a better run performance. The conditions in Kona are a challenge for all athletes. With proper cooling and nutrition I hope to be able to handle the heat and show what I’m capable of.

T: Do you have any plans for after Kona?

D: I haven’t really thought past Kona yet but I can rule out another Ironman in 2019. I also haven’t planned 2020 yet, but clearly I want to erase the Frankfurt DNF. But I’ll think about it in my season break if that’s going to be next year.