At Ironman Hamburg, 27-year-old Danish athlete Kristian Hogenhaug had taken the T2 lead with the best bike split, but I expected that the more experienced athletes just three minutes behind him would be able to take the win. Andreas Raelert and Ruedi Wild were able to reduce Kristian’s lead to just over one minute after 10k, but then something unexpected happened: The gap didn’t change much in the second of four run loops, Andi was forced to drop out and Kristian extended his lead to Ruedi back up to three minutes. At the end of the marathon,  Kristian took his first Ironman win, and a gap of five minutes to second-place finisher Ruedi Wild allowed him to enjoy the finish chute, not sure whether to laugh or cry and ending up doing both at the same time. 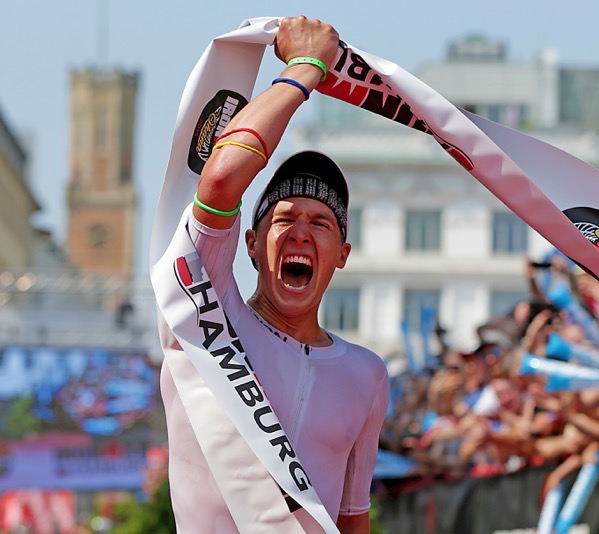 In the press conference after the race, Kristian just stated that when he started to do triathlon Ironman winners were super-human to him and that he couldn’t believe that he had been able to take the win in Hamburg. Following a brief chat in Hamburg we’ve exchanged a few emails, so here are some more details about Kristian, his development over the last few years, his Hamburg race and the goals for Kona and beyond.

Thorsten: Let’s get some “technical stuff” out of the way first. In Danish, your last name is spelled Høgenhaug, what’s the best way to transcribe that for English and other languages that don’t have the extra umlauts?

Kristian: Normally we use “oe” to substitute “ø”. But I think Hogenhaug is much easier for people to pronounce, so let’s stick with that.

T: What’s your triathlon background? Which sports did you enjoy while growing up?

K: I have done a ton of different sports. I was into taekwondo, where I won some national titles as a kid, and then later on Badminton where I never really shinned. I have always been very fascinated by cycling and Bjarne Riis, our danish rider at the time, so after 7th grade I bought a road bike and rode quite a bit during that summer. But then I got introduced to the computer game “World of Warcraft” and I pretty much stopped during sports until I graduated from high school in 2010. I am a nerd by nature, so when I’m into something I am 100% – and during this time, it was gaming. In 2011 I started at a Danish folk high school, a school some people live at during their gap year. This one had a focus on sports. I pretty much stopped gaming and got introduced to swimming along with triathlon. One of our teachers had done an Ironman, and he was like a god to us. From then on I was hooked! Along with my studies in sports science at Aarhus University, I raced triathlon as an age grouper. I did my first Ironman in Copenhagen in 2012 in 9h43min. [In the Challenge Copenhagen list Kristian is shown with a 9:33, but he thinks something went wrong with his timing chip and that he started in a different wave than the results indicate.] In 2016 I qualified for Hawaii where I placed second in the 25 to 29 agegroup. 2017 was my first year racing in the pro ranks. So I am pretty much a gamer who turned his interest from computer to triathlon.

T: In my database I have four IM results for you in 2018 – two podiums, but also a DNF. How happy were you with your racing that year?

K: My 2018 season went above expectations. I had a terrible race in Texas 2018 (probably overtrained) but then had a near-perfect build-up to Copenhagen. [Kristian modestly skips his second place in 8:02:53, posting the fastest bike split as in almost all of his Pro races.] I decided to race Almere three weeks later, where I also had a very good race. [Again he “forgets” to mention that he finished third, with a bike split that was just slower than Cameron Wurf’s.] One of my good friends wanted to race IM Italy, and I decided to join him on the trip and do Italy, but drop out in T2, as this would have been the third IM in six weeks. So that was a planned DNF 🙂

T: What was the plan for 2019? It seems you were getting ready for IM Austria, but then you DNF’d there and went to Hamburg instead?

K: 2019 started with a surprising fourth place [at ITU Long Distance Worlds] in Pontevedra and a second [at the half-distance Challenge race] in  Herning. Both of them were done without specific training, so I knew that I was on point to something good. Klagenfurt was my A+ race. With the lead-up, I knew I had a good chance of battling for the win. Sadly I felt terrible in the last ten days leading up to the race and race-pace felt super hard (probably overtrained). On race day I struggled all the way, and after 10 km on the run I literally couldn’t move my legs faster than 5:30 pace, so I decided to call it a day. After a few days Hamburg was on my mind, this time though with the focus on getting fresh. Volume was lowered but with increased intensity, especially on the bike. I started to clock some of my best bike sessions ever.

T: What was your goal going into Hamburg, and how was race day from your end?

K: I didn’t go into Hamburg with the intention to compete for the win, actually I wanted it to be a consolation race for IM Klagenfurt, Austria was quite hard on my self-confidence. The goal was to get a good swim, which was mentally important for me, then try to bike very hard until I would catch the front pack, and then sit in until the run and see how I could do. I normally bike all the way by my self, so wanted to see what I could do on fresher legs. Other than that I didn’t have a goal. 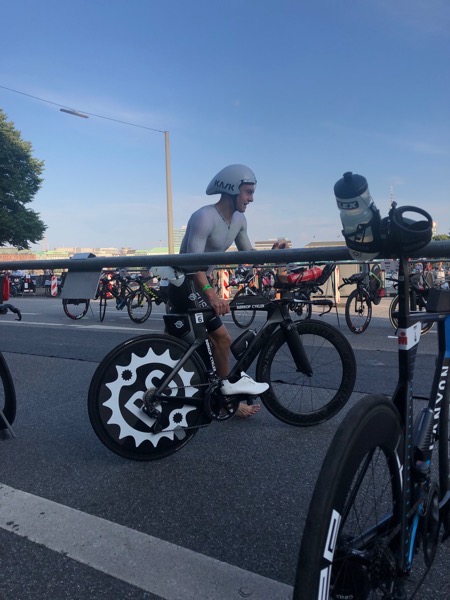 Photo: Kristian grabbing his bike after the swim. (Credit: TriRating)

The startlist looked terrifying with some decent bikers and very good runners. I caught the front pack after 2h 14 min. I burned some matches to bridge the gap, but I quickly felt the benefit of sitting in a good group. I freshened up a bit, and after 35 min in the pack I went to the front and settled into my 70.3 pace for 15 minutes. When I looked back, they were gone – which surprised me quite a bit! On the small climbs I had seen them stand up on the pedals, which in my perspective meant that they were all struggling just a bit, but I was still very surprised that I had opened up a gap. Coming into T2 I was very happy with a three-minute lead. I had ridden seven minutes faster than the legend Andreas Raelert which got me pretty hyped. 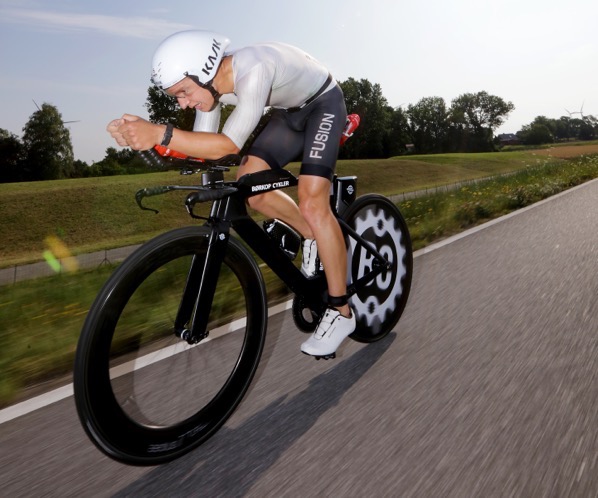 I did some quick mental arithmetic and thought that I could run 4:00 min/km, they are probably gonna run 3:45 min/km, so by km 10 they should pass me. My hope was that they would burn some matches in the attempt to bridge the gap, and then maybe I was capable of running with them. It never happened though. Suddenly we were running the same pace, so I knew they struggled quite a bit. But the gap had gone down to 1:30 minutes. I still felt very good at this point – to me, the key to a good off-the-bike run in an Ironman is that the first ten km have to feel like a recovery run, then when you really start to struggle the pace won’t drop dramatically – it will just get a lot harder. I know that I can run a decent marathon after a very hard bike. And I think that the run splits explain the race dynamics. The run course isn’t that hard, but the run times are quite “slow”. That just speaks HOW HARD we all went on the bike. To be honest, I never ever thought that I would run the fastest run split – a nice surprise. 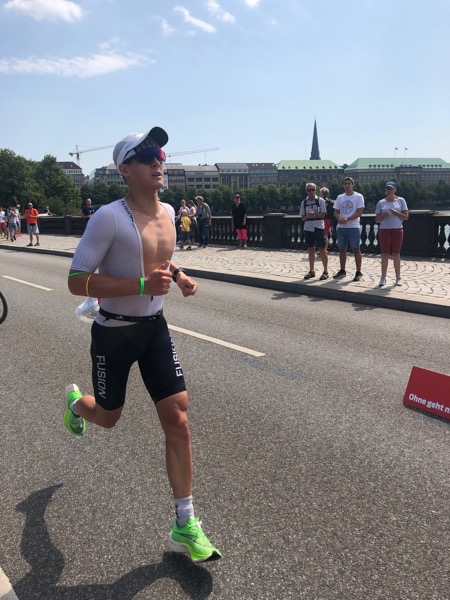 Photo: Kristian on the run in Hamburg. (Credit: TriRating)

T: You’ve raced Hamburg with a “blank race kit”. What sponsors do you have at this point, and do you think the win will generate some more interest?

K: I have a clothing sponsor and some smaller ones, but nothing big. I do hope that it will change. An Ironman win is very good when you have to negotiate sponsor deals – at least I hope! I hope that this can lead to a smaller work-load, so that I can focus even more on training and recovery. As of now I am actually trying to contact different brands, to see if they are interested in a cooperation 🙂 Wish me luck!

T: Now that you’ve accepted your Kona slot, how does the rest of the year look for you? Will you do some specific work in order to deal with the Kona heat and humidity?

K: I have a master of science in sports science (graduated in December 2018). I am very much into training physiology, nutrition, and right now I try to science the sh*t out of heat acclimation. I’m going to prepare here in Denmark. But I am probably gonna spend some time in a little tent with a heater and humidifier to simulate conditions that are even worse than in Hawaii. I have seen some quite interesting studies on it, they showed very promising results. I am going to do one more race before Hawaii. I race really good three weeks after an Ironman. So I am going to race Challenge Almere in September, four weeks out from Hawaii. Then I’ll have two weeks of a very hard heat acclimation protocol (in Denmark) and then fly to Hawaii 10 to 14 days prior to the race. I’m really looking forward to going full nerd-mode on the heat thing :-D. I was in Hawaii in 2016 as an agegrouper, where I also did a lot of studying on heat and cooling strategies. It went very good in the heat and humidity, but I also gained A LOT of experience on how to tackle it even better.

T: What are your expectations for your first Pro race in Kona and the next season?

K: In 2017 I made a 5-year plan. That included a Hawaii qualification in 2020 and a Top 10 in 2022. So I’m already ahead of the plan, it’s really crazy! The dream-goal this year is a Top 15 result – I would be over the moon if that happened. Experience is important, for sure racing in the pro field is something different than as an agegrouper. For now a career goal (based on the 5-year plan) is a Top 10 before 2023. After those five years, I’ll revise the goals. But for now, that is what is achievable and what I will focus on 🙂