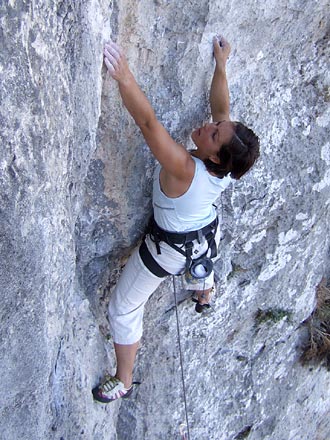 When Caroline Livesey decided to do her first Ironman, she was a Royal Engineer Officer in the British Army stationed in the Helmand Province in Afghanistan. Before joining the Army, she was massively into rock climbing and jokes that she still has “forearms that no sane triathlete needs”. She did a lot of expedition routes in Africa and South America, and the demands of 12 to 15 hour-long days made her incredibly fit. When she joined the Army in 2003, she was one of the fittest in her platoon at officer training at the Royal Military Academy Sandhurst. She didn’t have a background in swimming or biking, still one of the physical training instructors pointed her towards triathlon. Her “first triathlon was absolutely dreadful”, but she was quickly putting out impressive power on the bike. When she met her future husband Mark in 2007  she started to take triathlon more serious and was fifth in her agegroup at the ITU World Champs in 2008.

In 2010 the Army sent her to Afghanistan as an Engineer to design and manage infrastructure projects. She had to work in full body armor in the Afghanistan heat and dust. 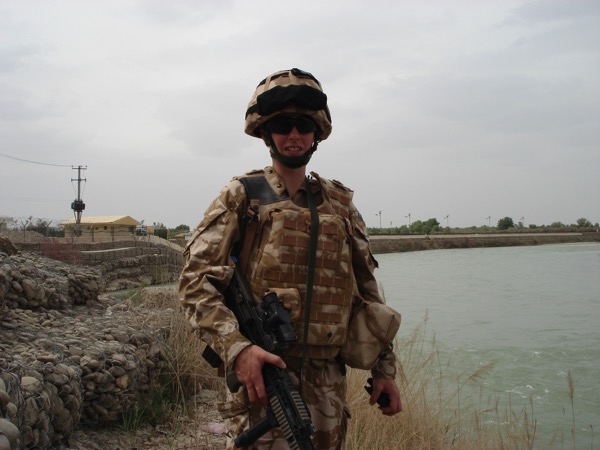 (Photo: Caroline in full gear, reviewing the site of a damaged bridge in Afghanistan.)

Almost anything sounds good compared to Afghanistan, so when her fiancee (now husband) Mark suggested Mexico as the destination for their honeymoon, she quickly accepted – even when Mark casually mentioned doing Ironman Cozumel as part of it. Caroline’s engineering background has taught her to deal with problems, so her training in Afghanistan was on two routes – either the camp perimeter which was less than a kilometer or the helipad which was roughly 400 meters. The bike had to be done on the trainer. She finished Cozumel 2010 in 10:42, Mark even qualified for Kona. She qualified herself with a 10:02 at Texas 2014, broke 10 hours with a 9:46 in Austria and finished third in her agegroup on the Big Island with a 10:13. What was planned as a “one off” experience and only a temporary break from climbing had quickly developed into a quest to find out how good she can be.

By 2015 Caroline had left the Army and was working as a geotechnical consultant, dealing with projects such as cliff stabilization or building and maintaining dams. Even with a full time job she decided that getting her Pro card was the best way to find out how she measured up against the best women in the sport. As a “rational  engineer” she gives practical reasons for turning Pro (such as easier registration for races), but talking to her it’s clear that that’s not the main reason. Most of the other Professional athletes with a Kona focus are either delaying, suspending or scaling back their career, at least for the time that they are racing professionally, but Caroline loves both her job and racing too much to want to decide between the two. “I don’t want to give up Engineering, I’ve worked so hard to be where I am with my job, so racing as a Pro never meant going full-time. Ironman racing is never going to pay my way – I earn the money in my job so I can go racing. I’m not an Olympic Champion or Ironman Champion such as Jan Frodeno, but it was amazing to sit next to him at the IM Lanzarote press conference in a beautiful hotel. I know that being part of this crazy circus is not going to last, so why not have a good time!” 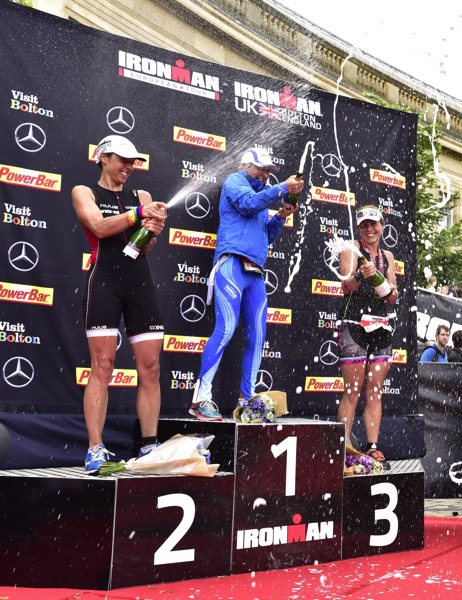 Caroline’s first Pro race was IM South Africa in March 2015. In the deep Regional Championship field she finished in 12th place. She received a lot more attention in her next race when she grabbed her first Pro podium with a 3rd place at IM Lanzarote. She backed that up with her current personal best Pro IM: A 10:05 at IM UK was good enough for a second place behind a dominating Lucy Gossage – a result beyond her “wildest dreams”. At the start of the year she did not think about Kona at all, but after these great results “just one more” good race at 70.3 Wiesbaden would have given her enough points for an August slot. But she was probably exhausted after racing three IMs in the first half of the year – her body wanted to “call it a day and hit the off season with gusto”. After a disappointing 11th place finish she was five spots short of qualifying – similar to a couple of other female Pros who raced well across the year, but just not quite good enough for a slot. Looking back, she realized that she had lacked a plan geared towards qualifying.

Caroline started the 2016 season with the clear goal of qualifying for Kona as a Pro. Qualifying for Kona means being ranked as one of the Top 35 female Pros in the Kona Pro Ranking. She is disgusted that there are more Pro slots for the men, making qualifying harder for the women and requiring them to race more often. To be ranked in the Top 35 female Pros she will have to score about 4.500 points in her races. (The actual number will depend on how athletes race and may end up higher or lower, but 4.500 is a good starting point.) To translate this into race results, it corresponds to three third places in “normal” Ironman races (roughly 3.800 points), and some more points from 70.3s. As a male, about 3.500 points are needed to be ranked well enough for a Kona slot, which can be achieved with two podium IM finishes and some more points from 70.3 races. While frustrated about this inequality, she has to work within the rules that Ironman has decided on.

To reach her goal of Kona qualifying, Caroline was well aware that she would need some exceptional races. She planned to race at least four full distance Ironman races, knowing that racing a lot is very hard on the body. As she is still working full-time she has to squeeze her racing into long weekends of unpaid leave – probably not sustainable for the long term. She started to collect points towards Kona 2016 in the fall of 2015 with a podium finish at 70.3 Turkey. As one of her Ironman races she had picked Ironman Malaysia in November 2015. The hot, humid race usually doesn’t attract many athletes and is therefore a good scoring opportunity. However, she couldn’t spend much time getting acclimatized to the conditions, and realized pretty early in the race that she was overheating. She wasn’t able to finish the race and therefore couldn’t improve her KPR ranking. But she quickly turned around to race 70.3 Bahrain just three weeks later. A fifth place finish gave her a total of 1.100 points at the end of 2015. That was pretty much what she needed from 70.3 races (and gave her a slot in the 2016 70.3 World Championships in Mooloolaba, Australia), but she would have to score the bulk of the Kona points in her 2016 Ironman races if she wanted to qualify.

Caroline was optimistic for her first Ironman of 2016 in Lanzarote. After a prep 70.3 race in cold Pays d’Aix her goal was to finish on the podium by racing smart on the bike and then having a strong run. Her swim and bike went well (she biked 14 minutes faster than a year ago) and she was in fourth place at the start of the run. 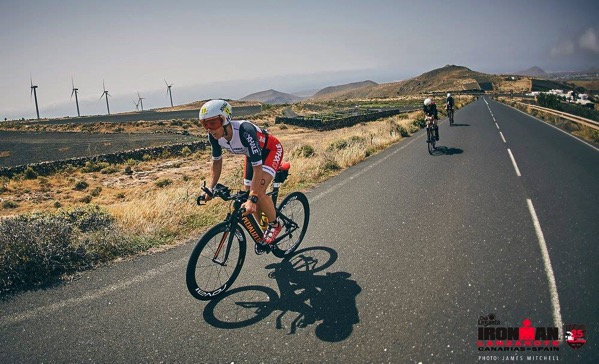 But a couple of athletes had great runs while she struggled to hold her pace. She ended up in fifth place after promising herself on the run to retire from the sport. Her husband Mark was able to qualify as an age grouper in Lanzarote, and just one night after the race Caroline was back to being highly motivated to qualify as well. She had registered for Ironman France which gave her only two weeks of recovery. Even with lots of work and last minute travel planning she tried to make the most of it. But her race in France was similar to Lanzarote – after a good swim and bike (her fastest IM bike leg so far) she was within minutes of Leanda Cave who was in third place. The first 10k went well: She made up one place and was closing the gap to Leanda, but at around 15k she started to struggle. After the second of four run loops she had dropped back to eighth place and she decided to call it a day in order to save the legs for the next race.

Caroline’s next race is Ironman Frankfurt – the fourth Ironman start in her quest towards Kona 2016 qualifying. In the Kona Pro Ranking she is at 1.870 points, and she could secure a Kona slot by finishing third (=2.890 points). However, that is an unrealistic goal for her in the strong and deep field in Frankfurt. More realistic goals for her are to finish “in the money” (Frankfurt is paying 10 deep) and to set a new Ironman PR on the fast Frankfurt course – currently her best Pro time is 10:05 from Ironman UK 2015 (she also has a 9:46 from Austria 2014 as an agegrouper). But I think the main goal for her should be to have “a good race”, one where she can still race well in the second half of the run and make up some places. If she manages to do that, she should also score well in the Regional Championship race (for example a seventh place is 1.335 points, similar to a third place in a “normal” IM). With good points from Frankfurt I’m sure she’ll continue to work to qualify for Kona – even if it means to race her fifth Ironman of the season before the final cutoff in August!

All photos supplied by Caroline.