Three weeks ago, there was a discussion about the start gap between MPRO and WPRO when Angela Naeth received a drafting penalty at 70.3 Oceanside (see my analysis on Oceanside). This weekend, the discussion flared up again after the 70.3 in New Orleans when Lauren Goss posted the following tweet:

Here’s a closer look at how the New Orleans race unfolded for the Professional Men (blue) and women (red): 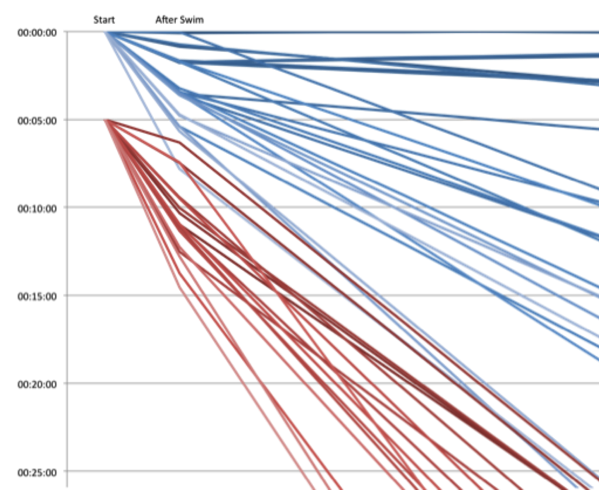 You can see that the start gap was at five minutes (as compared to three minutes for Oceanside). Clearly, the front of the women were riding with a number of Pro Men who had a slower swim.

I’ve made the following recommendations after Oceanside:

From Lauren’s description, it seems obvious that the men that she and Jennifer Spieldenner rode up to were interfering with the women’s race and did not observe my recommendation #2. As for the first suggestion, here’s how the race would have looked with a ten minute gap: 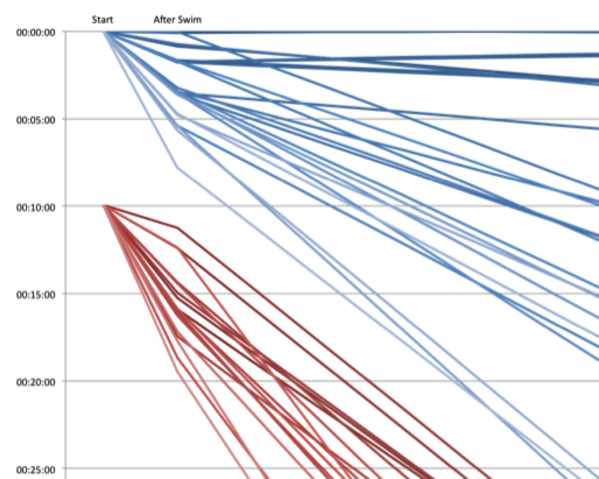 Similar to Oceanside, having a ten minute gap would have avoided any overlap between MPRO and FPRO fields. It would be great to see the recommendations taken up in future races. Even without resorting to more drastic measures such as DQ’ing MPRO that get overtaken by the leading woman, a ten-minute gap would allow the women to have a much cleaner race than what we are often seeing with a smaller gap.

One Response to Start Gap at 70.3 New Orleans