At Oceanside 70.3 the Pro Women caught up to the Pro men. Alicia Kaye (who eventually finished fourth) describes the situation in her blog post on Oceanside:

[A] pack of pro men came by me [at around mile 30] .. From this point on, I had a pack of pro men around me until T2.  It was extremely frustrating and it clearly affected the women’s race. On some occasions the pro men around me were not doing strong passes, causing me to sit up and put on the breaks to get a 12m gap in between us within 25 seconds.  Multiple pro men ‘slotted in’, in front of me when I was spaced at 12m.

Riding in this group, she saw how fellow Pro Angela Naeth received a drafting penalty:

As we entered Camp Pendleton everyone in the pack moved to the right to get fluids at the aid station. I moved left to make a pass since I was not using the aid station.  Angela grabbed a bottle then moved left but wasn’t proceeding past the people on the right.  I yelled for her to move and she moved forward immediately; I needed to get by her within 25 seconds and the clock was ticking!  I pushed hard to get passed her and shortly after I heard the referee give her a blue card for drafting.

Here’s how Angela describes the situation in her blog post:

At mile 30, as I was making a pass on the two gals I just caught,  I was told I received a blue card for drafting (not giving enough time for a pass albeit we (a few male pros) were on a hill and just past an aid station!).

Obviously, it is never right to draft or not doing a pass in the allotted time, but things get tricky when a lot of athletes are in close proximity. Alicia and Angela were clearly frustrated by the situation. Here’s Alicia’s view:

I was not the only one who experienced this, I watched it happen to other female pros when they were trying to get through the pro mens pack on the hills. This should not be happening! It is also possible the a pro women could gain an unfair advantage by riding with a pack of pro men, but what I saw was pro women trying to get away and pro men getting in the way. The pro women deserve a clean and fair race, and quite simply the pro mens and pro womens race should not be interacting at all.

Despite her five-minute penalty, Angela eventually ran her way into fifth place. After the race, she was already looking for ways to address the problem:

Looking a bit closer at the wave start in Oceanside, there were just three minutes between the MPRO wave and the FPRO wave. To visualize the impact of the small gap, here is a look at how the PRO fields overlapped in Oceanside: 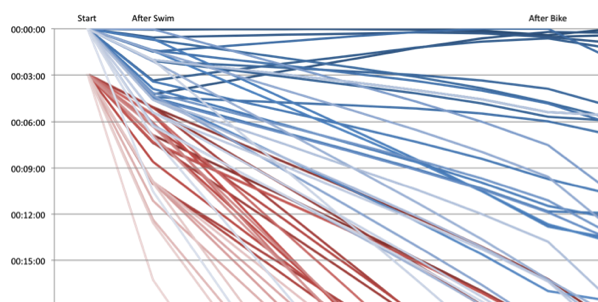 The data clearly supports the anecdotal evidence by Alicia and Angela of a pretty large overlap of the MPRO and FPRO fields.

Ideas for a Clean WPRO Race

There have been a few suggestions on how this situation could be avoided:

Implementing suggestion #1 in Oceanside would have resulted in 11 DQs into T2 (and another two on the run) – obviously that is a large part go the male field and probably a bit unreasonable to implement. Also, if an MPRO has the bad luck of a flat early in the bike, that would mean the end of his race – even if he could complete the race and still get a few KPR points.

Increasing the gap between the MPRO and FPRO so that there is no overlap at least until the end of the bike is also not an option – for Oceanside even a gap of 30 minutes wouldn’t be enough.

However, a mixture between both options can be a viable solution: There are two MPROs that trail the rest of the field by 16 and 26 minutes in T2. Clearly, these two are no longer „racing“ for a specific place finish – even if they are forced to “sit up“ when passed by a WPRO it wouldn’t change their final position. After a pass, they should be a clear separation – at least of the „Challenge Distance“ of 20 meters to any FPRO.

If in addition the start gap is increased from three minutes to nine minutes, we only have one male being overtaken by the WPRO race leader shortly before T2: 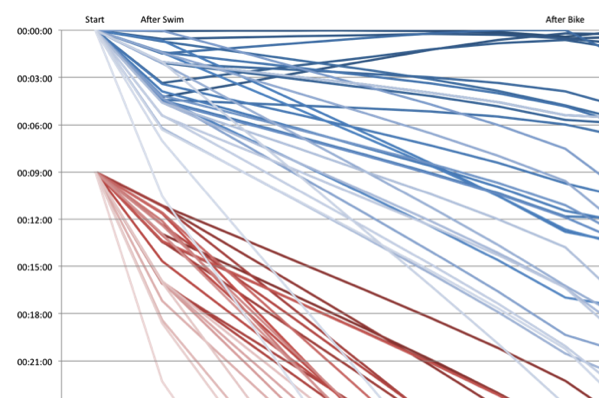 To sum up, here are my suggestions for a clean WPRO race:

An increased gap would also allow the race organizers to deal with another complaint as noted by Alicia: “Pro women must be allowed equal swim warm up time as the pro men.“ (The women Pros were not allowed a warm-up swim prior to the race in Oceanside.)

I hope that organizers address these issues for future 70.3s and also think about potential problems when planning the start of upcoming Ironman races: There were massive issues about „clean races for WPROs“ in Brasil and Frankfurt because of fast AG men mixing with the WPRO. Both races are important Regional Championships this year and it would be a shame to see Kona slots being influenced by issues that could be mitigated by separate starts with decent gaps.

All measures should help to make the women’s race as clean and fair as the men’s race – as it should be!

2 Responses to 70.3 Oceanside: Analyzing gap between MPRO and WPRO