After this year’s Kona race a lot of posts focus on the “German Podium Sweep” – not all of them (including one of my tweets) made it sufficiently clear that this “sweep” only refers to the male side. 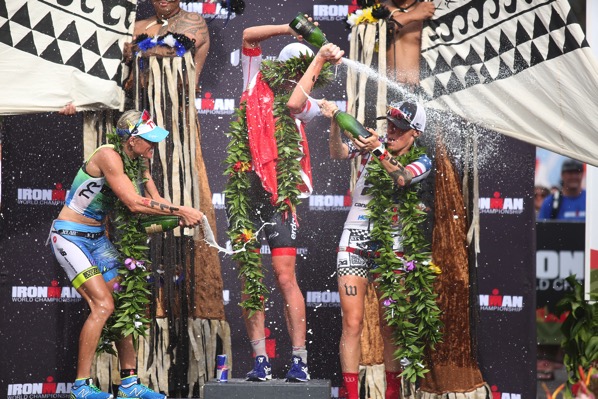 Here’s a fuller look at the nationality of top Kona finishers using the following parameters:

Here’s the breakdown of the nations of all male and female Kona winners from the first race in February 1978 to October 2016 – all in all 40 male and 39 female winners: 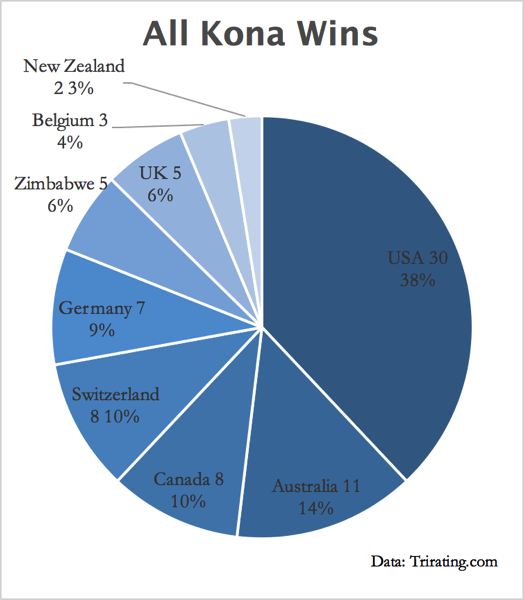 The only “triathlon exotic” country in the list is Zimbabwe, that is due to Paula Newby-Frazer racing for Zimbabwe until 1992 for five titles, she won another three when racing for the USA afterwards (according to the Wikipedia article on the Ironman World Championship).

The USA is still the clear leader in overall wins. That changes however when you only look at the winners since 1996: 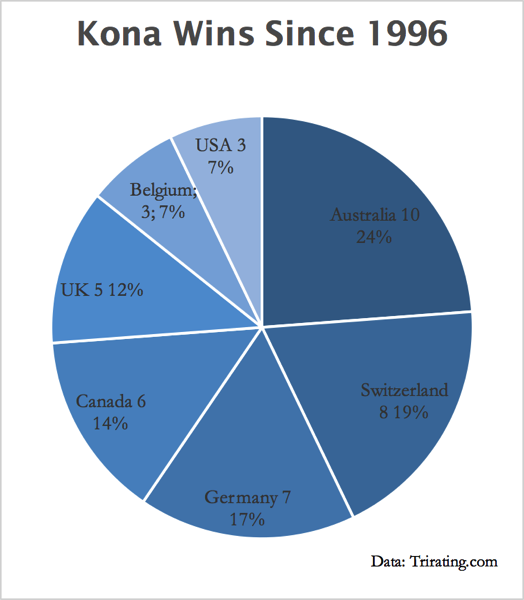 Australia has the most wins since 1996, closely followed by Switzerland, Germany and Canada.

While Australia has a relatively even split between male and female wins (6 male to 4 female wins), all Swiss wins are from the female side: 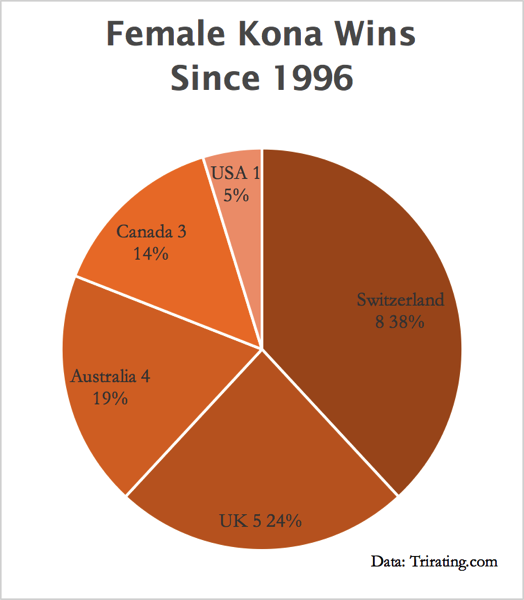 In contrast to that all German wins are on the male side: 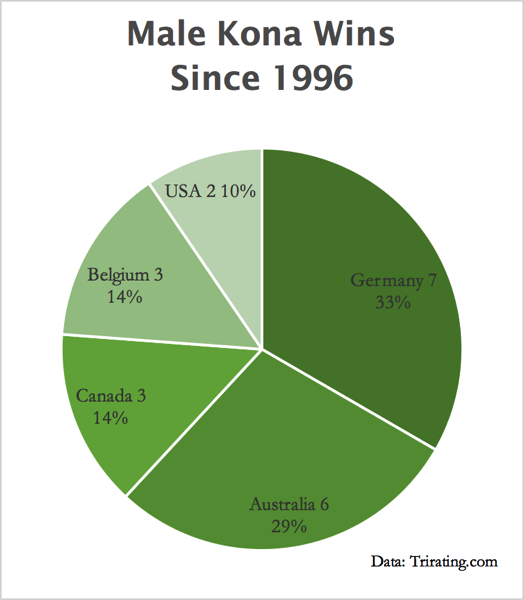 There is a similar development when looking at podium finishes (total 234, 120  male and 114 on the female side as early years didn’t fill all podium spots). The US still has the most overall podium finishers : 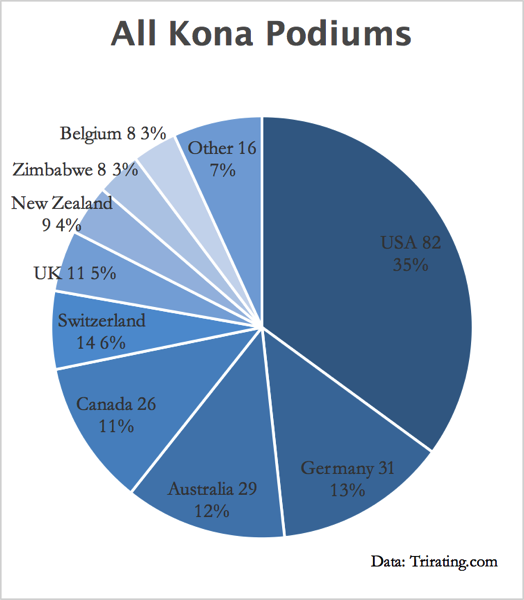 The “Other” category includes Brasil 6, Finland 3, Netherlands 2, Spain 2, and France, Denmark and Chile with one each.

The US is no longer in the top spot if you look at Kona races since 1996: 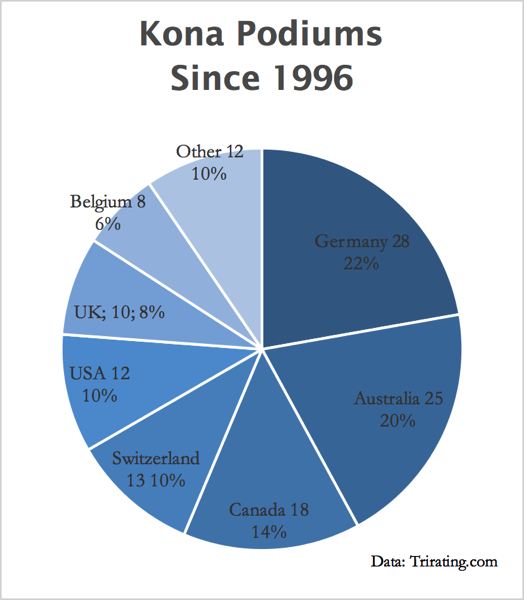 Since 1996 Germany has had the most podium spots, with the “German dudes” dominating the male podium spots: 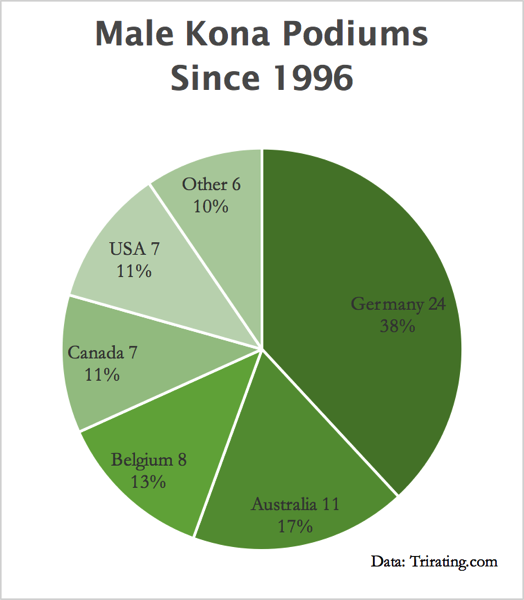 On the female side it’s a pretty close race between Australia with 14 podium finishers, Switzerland with 13, Canada with 11 and the UK with 10: 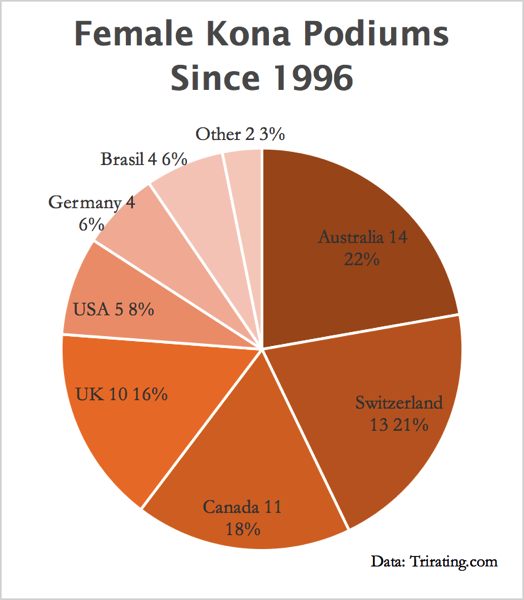