There is a number of good 70.3 athletes stepping up to the Ironman distance, among these are Javier Gomez, Emma Pallant, Anne Haug and Laura Philipp who are lining up for their first Ironman races in the next weeks.

I’ve been asked to predict their Ironman capabilities from their 70.3 races. Of course there are a lot of issues that make this difficult: There are athletes that are naturally stronger on one distance over the other, some athletes decide to focus on one distance (and are therefore unable to race at their full potential over the other distance), and there are a lot of uncertainties when athletes step up for the first time. Nonetheless, there are ranges that might be considered “normal” and can therefore serve as an indication of what these athletes might be able to do.

With the race results in my database, I calculate ratings for the 70.3 and the Ironman distance that abstract away as much as possible fast and slow courses and the specific conditions on race day. I have analyzed these ratings for athletes that are among the Top 100 in both ratings. As not all athletes race both distances on a regular basis and might not be among the Top 100 athletes, my analysis is based on 107 data points.

When moving from 70.3 ratings to Ironman ratings, I calculate the “slowdown” that occurs when moving up the distance. To express it as a formula:

Here’s a look at the distribution of the Slowdown: 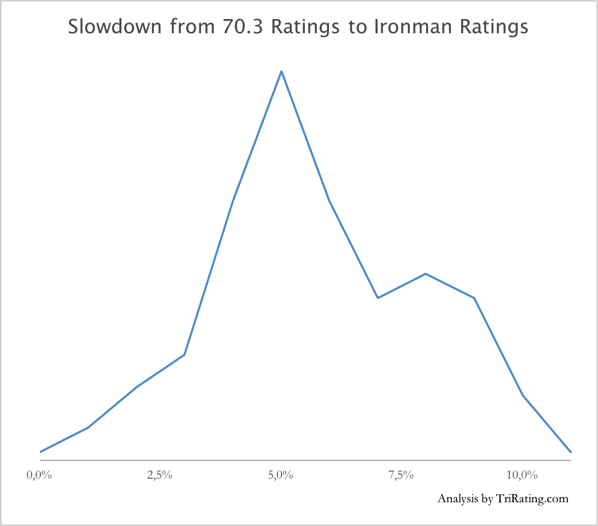 The average slowdown is 5.35%, i.e. the average athlete slows down a bit more than 5% when moving from the 70.3 to the Ironman distance. Athletes who are pretty close to that average are Sebastian Kienle (slowdown of 5.7% or 26 minutes) and Meredith Kessler (slowdown of 5.23% or 28 minutes). There are also athletes who don’t slow down quite as much – usually because they haven’t been focused on racing 70.3s as much as Ironman distance races (e.g. Patrick Lange 1.69% or Lisa Roberts 0.98%). On the other hand, there are athletes with a large slowdown – mostly because they are still in the process of moving up in the distance (e.g. Braden Currie 9.1% or Magali Tisseyre 9.05% – corresponding to roughly 45 minutes).

The graph and the data in the previous section are based on athletes that are within the Top 100 ranked athletes both for the IM distance and the 70.3 distance, indicating that they have been racing on both distances for some time. It’s obviously tricky to use this data to predict how established 70.3 athletes will be racing in their first race over the longer distance. So instead of just making a direct conversion based on the average from above, I will show pretty wide ranges that should cover a wide range of possible outcomes. (For those interested in the details: I’m using one sigma on the fast side and two sigmas on the slow side to reflect that a slower outcome is likely to be more common for an athlete’s first race. This should roughly 80% of the expected race times.)

The first line for each athlete in the following table shows the conversion from a 70.3 rating to a range of IM ratings. The second line shows what this rating range corresponds to as a finishing on the course they are expected to race:

To explain most of the data in the table:

The data for Anne Haug shows the limits of this analysis and the resulting predictions: The conversion of Anne’s 70.3 rating to a finish time at IM Germany sees her finish at around 8:45 which is somewhat unlikely – after all the course record by Daniela Ryf is 8:51! The data shows Anne’s potential on the full Ironman distance,  and while it won’t be a surprise to see her finish sub-9 in Frankfurt, there’s a lot that has to go right for her to challenge Daniela or last year’s winner Sarah Crowley at this year’s IM Germany.