As usual, Challenge Wanaka was a tough course. This year conditions changed throughout the day – a choppy swim was followed by a warm windy bike and rain on the run. The overall adjustment was almost the same as last year, but the 2016 bike was slower and the run a bit faster.

Technically, Dylan McNeice’s swim time of 43:30 was faster than his 2015 course record of 45:33, but as the swim was slightly shortened it will probably not count as a new record, even if this year’s swim was only a bit more than a minute faster than last year’s swim. 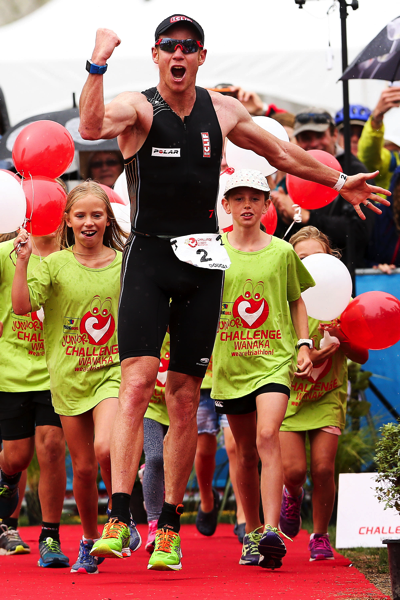 As usual, Dylan McNeice was leading after the swim. He held on the lead until Maik Twelsiek took the lead at about 100k. Maik was leading in T2, but Dougal Allen improved his swim time from last year by more than eight minutes, posted the fastest bike ride of the day and was less than four minutes behind Maik in T2. It took him less than 15k to close the gap to Maik, and Dougal ended up winning his first IM-distance race by almost 9 minutes. Maik held on to second place, third place went to Matthew Russell who once more posted the fastest marathon of the day. Defending champion Dylan McNeice was dropped back to fourth, he was almost caught towards the end by Per Bittner who finished fifth.

Joe Skipper was the unfortunate DNF among the pre-race favorites, he had some technical issues after his bike was damaged during his flight to New Zealand. Hopefully he can get it fixed in time for IM New Zealand in two weeks, I’m sure he’ll be even more motivated to do well in Taupo now.
Photo: Dougal Allen celebrates his win, Photo by Hagen Hopkins/Getty Images 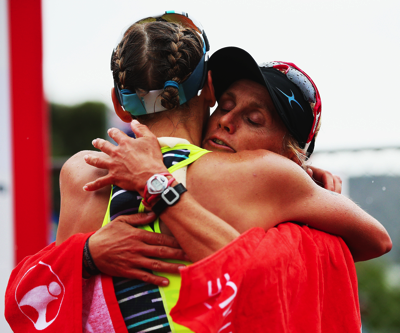 While it wasn’t a surprise to see Anna Cleaver leading the race into T1, Laura Sidall and Yvonne Van Vlerken were in the same group with Gina Crawford just a few seconds behind – both Laura and Yvonne are typically slower swimmers and must have worked hard during the winter. Both quickly stormed to the front and Laura built a small lead into T2. The rest of the field was quite far behind after Gina, Simone Maier and Alyssa Godesky had to withdraw on the bike.

Yvonne proved to be the stronger runner, her race best marathon allowed her to build a margin of three minutes to the finish, but Laura also had a good run, continued to keep the pressure on Yvonne and finished in second place. Age grouper Meredith Hill had the third fastest female finish time, Julia Grant finished third in the Pro ranks.

Photo: Yvonne and Laura congratulate each other after the finish, Photo by Hannah Peters/Getty Images