WTC has announced a new schedule for the Kona start:

This will mean that the gap between the Pro Women and the Age Group Men will shrink from 25 minutes (where it was in 2013) to 20 minutes. This blog post has a look at what this might mean for the WPRO race. For a number of reasons, we will focus this analysis on the end of the bike:

In case you are not familiar with my „race development“ graphs, here is a quick introduction using last year’s Women’s Kona Pro race:

The horizontal x-axis shows different points during the race, such as the start, after the swim, and various points on the bike and the run up to the finish. The vertical axis shows how far back each athlete is from the front of the women’s race. So for example, you can see all the athletes start together, then some of them being as far back as 20 minutes after the swim, and – towards the end – the final change in the lead around 15mi on the run. Each of the red lines represents one women’s race. Now let’s add the Age Group Men (blue lines) to this graph: 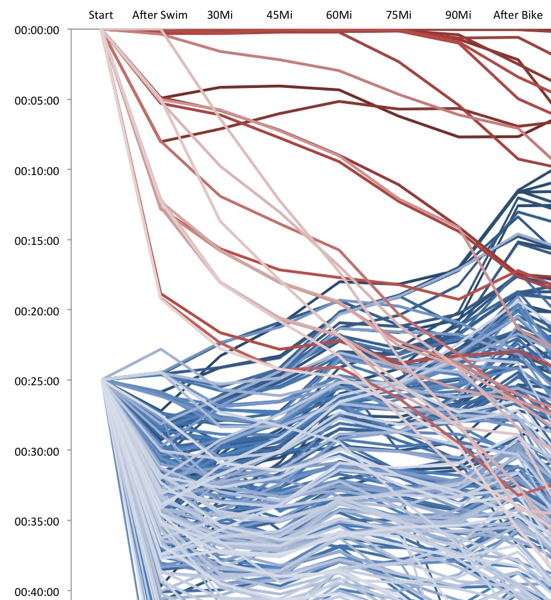 You can see the men starting 25 minutes behind the women, and the fastest of them slowly making their way through the slower Pro women. Here are some more facts that you can’t easily discern from the graph:

Now lets assume that the Age Group Men started five minutes earlier. You can easily see how many more men overtake the women and how much sooner they start to do so: 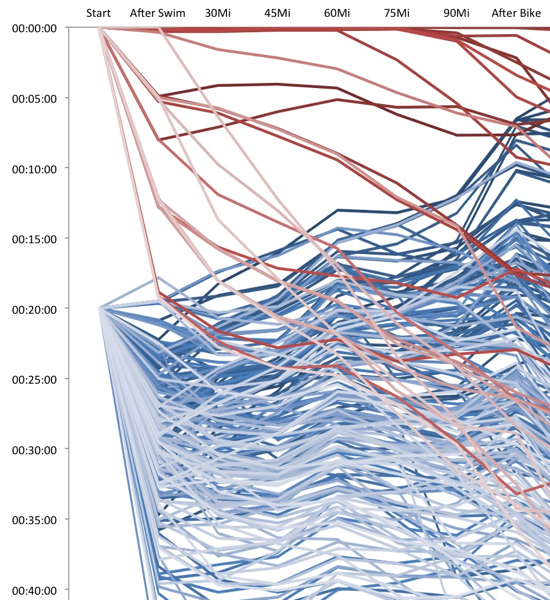 Here are the corresponding facts to the 25 minute section:

While the difference between 20 minutes and 25 minutes sounds very small, the difference to the second half of the women’s Pro field is very noticeable. Around the 25th women there is an average gap of 30 meters – technically still enough to avoid illegal drafting (12 meters from back of the bike in front of you to the front of your bike), but it seems obvious that there will be some larger groups forming that might either help the slower bike riders or cause problems for those with a good finish after pacing their bike well. Therefore, WTC should strongly consider leaving the gap at 25 minutes.

Here are the options that I see that result in a 25 minute gap between the Male and Female Pros:

Weighing all the options, I think that the first option (move both age group starts one minute back) is the best. To alleviate the concerns for the 16-hour-women, maybe it is an option for the slower age group women to start with the age group men. It’ll be interesting to see if WTC acknowledges the concerns of the Pro Women for a clean race and will be open to more changes of the Kona start times.