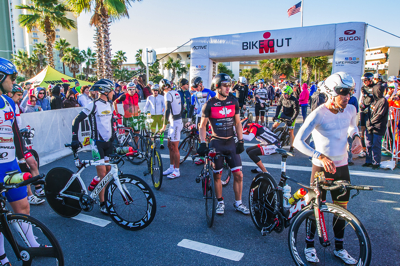 On race day, there were currents and riptides that did not allow for a safe swim. After the cancellation, the race was started in a time trial fashion, with athletes starting every 30 seconds (see photo on right, photo credit Ironman.com).

Of course, the times from this year are not really comparable to a „normal“ Ironman race with a swim. Therefore, I can’t be using the Florida results in my ratings. However, I was able to do a rough comparison of the raw bike and run times to expected times before the race, allowing my to assess how fast the course was and if an athlete had a good race. This analysis also shows that the bike was relatively slow for Florida (adjustment of 7:32 compared to a bike rating of 15:06). This was probably caused by the cold and windy conditions. The run was pretty quick for Florida, but still a bit slower than last year’s ideal racing conditions.

Lionel Sanders was racing his first full distance race. After the cancellation of the swim he was the clear favorite, quickly took control of the race and built a huge lead into T2. On the run, he even increased his lead, delivering the fastest bike and faster run, winning by almost 20 minutes. Behind Lionel, Tom Lowe had a good start to the 2014 season finishing second, and Maxim Kriat took the last spot on the podium. Ben Hoffman validated his Kona slot with a 10th place.

The result of the female race was also evident early on, with Yvonne Van Vlerken posting the fastest bike and run and winning by 35 minutes! Second across the line was Ashley Clifford, but in the time trial start she had started before Camilla Lindholm and her final time was 27 seconds slower, so Camilla ended up second and Ashley was third.