In the past, weather troubles such as wind (shortened swim in 2013) or lots of rain (first edition in 2012) made the course a bit harder. This year the conditions seemed almost perfect: A calm swim (allowing Marko Albert to post a new course record by four seconds) and not too windy on the bike (allowing Nils Frommhold to post a new bike record by almost two minutes). If there was any „criticism“ of the weather, the run was into a headwind. Overall, the race was a little bit slower than last year (adjustments of 13:57 vs. 15:02), leading to a new course rating of 12:43.

This was the first time that the new GPS trackers were used for the Pro athletes and a new „Ironfan“ web page was deployed by Ironman. Here are a few observations:

There was a live show with two commentators (Greg Welch and Cameron Harper) that did a pretty good job (even if not as „lively“ as Michelle Vesterby, they totally knew what they were talking about). There were pictures from the course at about the same level as what we have seen in Kona (and from Challenge Bahrain and Dubai). The highlight were expert commentary and interviews by Emma Snowsill, Liz Blatchford and Jason Shortis. They inserted some canned ads in the show, but I felt them tolerable (even if the repetition made them worse and worse each time). The only time I found them annoying is when they showed them directly after the Top 3 women, so I missed the next women crossing the line. (Maybe I could have switched to a different stream.) Overall, I’d give the Live Coverage a „B“ – good job by Ironman, but still some room for improvement!

After a quick swim without too much separation, Nils Frommhold and Luke Bell moved away from a big group of chasers, building an 11-minute lead. The big chase group probably made the pacing decisions  easier for some athletes new to the distance (such as Brad Kahlefeldt or Callum Millward) – it would have been great to see the impact of a 20m drafting rule here. After T2, Luke dropped back, eventually finishing in 15th place with a disappointing 4:16 marathon. For a long time, Nils looked like he had the race in the bag, but he also faded after 30k. Eventually Jeff Symonds proved to be the fastest runner, winning by three minutes over Tim Berkel who pushed the pace until the finish line. Brad Kahlefeldt showed that he can also run well over the marathon distance, posting the second fastest marathon and finishing in third place.

Christian Kramer was the fastest German in fourth place, followed by Nils and another IM rookie, Callum Millward in sixth place.

As for the men, there were two leaders on the female side as well: Caroline Steffen quickly caught up to the fastest swimmer, IM rookie Annabel Luxford. These two couldn’t build a big lead though, and Mel Hauschildt and Yvonne Van Vlerken followed them within four minutes onto the run course: 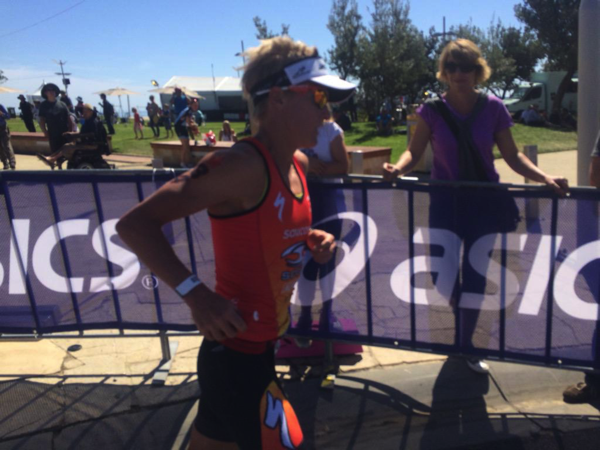 It wasn’t a big surprise that Mel would be the strongest runner of these four – she took the lead at about the half marathon mark. But she was struggling with blisters, stopped to apply Vaseline („that didn’t help at all“) and fought her way to the finish line to win in 8:52. Behind her, Caroline Steffen was feeling the effects of her food poisoning from two weeks ago and was slowing down. This allowed Yvonne Van Vlerken to overtake Caroline in the finish chute to take second place. Caroline stumbled over the finish line, was quickly taken to medical and couldn’t attend the podium ceremony.

Asa Lundstroem was solid all day and finished fourth, while Beth Gerdes continues her string of amazing improvements (first sub-5 bike and again fastest run) in fifth place. In sixth and seventh place rookie Annabel Luxford crossed the line with her good friend Mirinda Carfrae (who safely validated her Kona slot while not taking any risks after catching the flu earlier in race week).