Based on athlete’s previous results and their resulting strengths and weaknesses, I can come up with scenarios of how the race might unfold. The graphs show for various points along the course who could be in the lead and who is back by how much. They are based only on previous race results. Other important aspects, such as the course dynamics (hills, wind etc.) and race dynamics (for example groups forming), are not taken into account. However, the graphs give a good indication of what athletes we can expect at the front of the race in the various stages.

If you want to make your own predictions for the Melbourne race, check out IM-Predictions.com and let us know your top picks!

Here’s a look at the potential development of the men’s race: 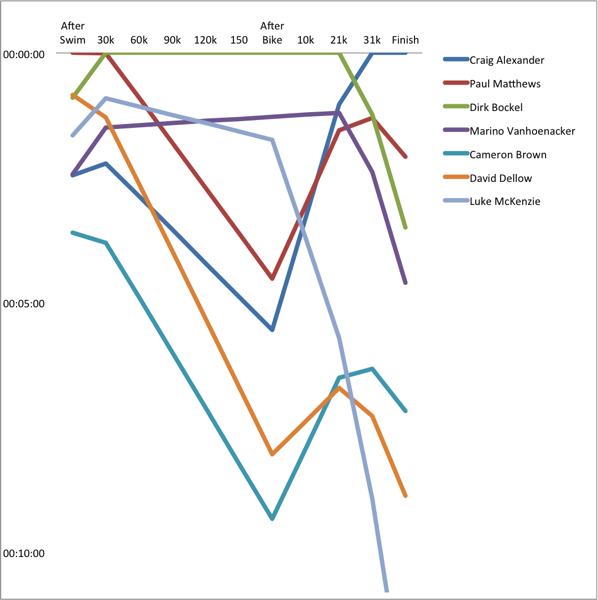 The strongest rated swimmer is Paul Matthews, but athletes like Dirk Bockel or David Dellow should be within one minute of him. There’s probably another group about two minutes back, among the contenders there should be Crowie and Marino. Based on his swim rating, Luke McKenzie is in the middle between these two groups – a lot will depend on his form on race day.

Another likely scenario is a cautious start to the day resulting in all of these athletes coming out of the water together in one big group.

According to the previous results, Dirk Bockel should quickly bridge up to the front and lead the race for most of the bike. Nominally, the strongest bike rider is Marino, I’m sure he’ll try to ride up to Dirk and pass him, but a lot will depend on their positions after the swim. Based on his last bike ride in Kona, Luke McKenzie could do a lot better than what the average of his previous results show in the graph.

My expectation is that Dirk, Marino and Luke will work together for a while to distance the stronger runners such as Crowie and Cam Brown. Paul Matthews and David Dellow could also go with the front group on the bike, or they might work with Crowie to save their legs for the run.

As usual, there should be a lot of position changes to the run. If Crowie comes off the bike within about five minutes after the leaders and is able to show his usual run form, he has an excellent chance of winning the race. By the half-way mark he should have made up most of the difference. By then, we will also know if Luke McKenzie is able to run close to his Kona form.

The winner will have to run the marathon under 2:45, and whoever is able to do that on race day should at least be able to get a podium spot. I have a handful of athletes finishing within just a few minutes at the front, so we can look forward to some exciting racing.

On paper, the women’s race looks to be a lot less exciting: 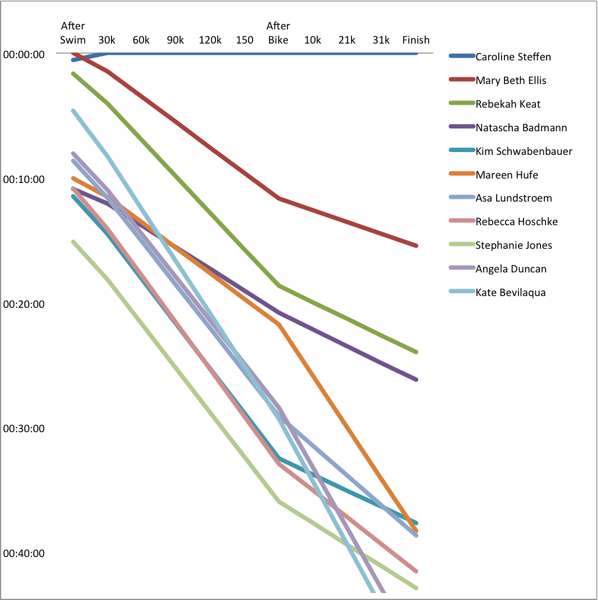 My top 3 rated athletes are also the strongest swimmers. I expect Mary Beth to lead after the swim, but closely followed by Caroline and Bek. Maybe Kate Bevilaqua will be able to stay close to them, she has been improving a lot in the swim over the last year.

All the rest of the women’s field will be at least eight minutes back, and there will probably be five to ten athletes coming out of the water in a bigger group or just a few seconds apart.

Nominally, „Xena“ should be about 10 minutes quicker on the bike than Mary Beth. Things may develop differently on race day, depending on the race plans of these two athletes. I can’t really see Bek sticking close to Xena and MBE, but based on her recent 70.3 results, Bek seems to be in great shape.

Even if it comes down to the run, Caroline should be the strongest athlete. I can’t really see her being beaten by Mary Beth, but there is still a lot that can happen on race day. At the front end of the race, I don’t expect too many position changes. Mary Beth, Bek and also Natascha Badmann have similar running abilities, so they should finish in the same order as after the bike.

The story is different in the race for the remaining good KPR points (5th is good for 2090 points and 8th for 1070, points quickly drop off after that). There are at least five athletes that I have finishing within just a few minutes (Kim Schwabenbauer, Mareen Hufe, Asa Lundstrom, Rebecca Hoschke and Stephanie Jones). Then there is also the „wildcard“ of Angela Duncan (Naeth), who probably hasn’t shown her true IM potential when she raced IM Lake Tahoe (finishing fourth which is where I expect her to finish in Melbourne as well). There will be some exciting racing, but unfortunately we won’t be getting too much information as it’s quite hard to keep track of these athletes in the middle of the field.

1 thought on “Ironman Melbourne 2014 – How the Race Might Unfold”